A look inside Marco Polo, the so-called Snapchat for boomers

Marco Polo has taken off during quarantine. Will the app continue to thrive in a post-pandemic world?

In 2017, Business Insider predicted that an app called Marco Polo would replace Snapchat one day. Spoiler alert: it hasn’t. However, during the pandemic, the app has thrived by making casual video messaging accessible for people more interested in keeping touch with old friends than sending thirst traps or tuning into celebrity confessionals.

A few weeks into lockdown in March, Marco Polo soared to No. 21 on Apple’s most downloaded apps chart and has since ranked as high as No. 8 on their top social networking apps list. The app saw a 745% increase in sign-ups the week of March 30 alone, reports The Verge. The company behind Marco Polo didn’t release numbers, but claims there are “millions” of people on the app. Those millions include Ice-T, who tweeted about how much he loved the app and P!nk, who listed Marco Polo among her isolation coping mechanisms. Amy Poehler and Seth Myers discussed Marco Polo-ing each other on a virtual Late Night segment in April.

But, since its initial explosion during quarantine, Marco Polo has dropped down to No. 54 on the App Store’s social networking list. Can the app continue to thrive without mass lockdowns?

So what is Marco Polo exactly? The app’s actual functions are, as suggested, very similar to Snapchat. Both apps let you ping-pong video messages back and forth. Marco Polo even calls itself a “visual walkie-talkie." The app’s name comes from the call-and-response messaging format — you send a friend a “Marco” video, they can respond with a “Polo” at their leisure. Snapchat turned this unit of communication — a “snap” —  into the basis of a social media platform. Users rely on Snapchat for entertainment, post their content publicly, follow users they don’t know, and consume content from brands, influencers, and celebrities. Marco Polo, on the other hand, distinctly opposes this kind of social media network.

“The app is designed to be for the people you feel closest to, not the world,” co-founder Vlada Bortnik tells Vogue. Despite its functional similarity to Snapchat, Marco Polo is positioned in the personal communication world as a competitor of FaceTime, Zoom, Skype or Google Hangouts, with flexibility as its selling point. “Polos” are an easy yet intimate way to catch up with friends and family without having to attend weekly calls for each of your circles. “With people you love, texts and social media don’t give the whole picture and calls are hard to schedule,” the app’s website warns.

Bortnik and her husband Michal were a pair of engineers looking for ways to stay in touch with family overseas. They created Marco Polo in 2012 and launched in 2016, alongside a wave of communication apps that blew up during quarantine like Houseparty and Tribe. It’s the flagship app of the Bortniks’ company Joya Communications, which has since produced Cleo, a personal budgeting app and FlipLid an app that adds voice effects and face-filters to your Facebook Messenger. It started gaining buzz in Silicon Valley leading up to its launch, and by 2016, had raised around $20 million, including cash from VC firm Benchmark, which has a track record of hand-picking start-ups for world domination, sitting on the board of Twitter, Snapchat, Instagram and Nextdoor.

90% of Snapchat users are between the ages of 13 and 24. Marco Polo hasn’t provided demographic data, but based on the age bracket of its celebrity endorsers and glowing op-eds written by parents, Marco Polo has discovered a market for short-form video chatting that its competitor misses.

“It’s so much more vivid and intimate to see each other’s faces—and become our girls’ night; our mom group; our lifeline when we are crying out for connection,” reads a Vogue story titled 'An ode to Marco Polo, the App Getting Parents Through the Pandemic.' A source with kids tells the magazine that she and her friends use Marco Polo “share craft ideas, recipes and hot tips on which stores are still stocked with supplies,” but also has turned to it “in her toughest moments.” Given the ages of Snapchat’s user base, it seems unlikely that similar conversations are happening on the platform.

From its beach ball emoji to its simplified user interface, Marco Polo’s wholesome experience has made Snapchat’s brand of low-stakes, casual video chatting accessible and relevant for parents, boomers and thirty-somethings. "The asynchronicity of Polo makes it feel like FaceTime, but at your leisure, allowing friends to record and share heart-to-hearts without interruption,” Vogue writes.

Marco Polo is generally intended for users to talk to people they already know. But, in the same way teenagers use Snapchat to flirt, older people are taking advantage of video chat meet-cutes. Brides Magazine interviewed several Marco Polo users who dated using the app, including some who ended up engaged. "It was an intimate enough setting to deepen a friendship without some of the awkwardness that can come in the early stages of getting to know someone," said Carol Tran Reynolds, who dated her now-husband over Marco Polo after meeting him at work.

One of Marco Polo’s biggest pitches for why it’s the best video chatting app for families is its promise to stay ad-free and never sell data to advertisers. Of course, this creates questions about its financial sustainability, as ads are the number one way free apps monetize. “There is a space for group and family video that has not been tapped into, so there is a value proposition for Marco Polo. The question is, how much is it worth for consumers," Holger Mueller, principal analyst and vice president at Constellation Research Inc posed to Silicon Angle back in 2016 when Marco Polo launched.

Marco Polo forced users to answer this question when it rolled out Marco Polo Pro in June, which, to many users dismay, put previously free features behind a $5 monthly membership paywall. “We want Marco Polo to be ad-free and around forever,” the announcement on the app’s website reads. “Now is the time when we need to make our business a sustainable one.”

A number of negative reviews about the paid features racked up on the app store. But thanks to months of hooking people on the features for free, some loyal users see the fee as a small price to pay. In an op-ed Worcester Magazine, Sarah Connell Sanders, a teacher, gushed that, thanks to the app, she’s closer to her old college friends than she’s been in “decades.” She was dismayed when Marco Polo Plus rolled out, meaning she’d have to pay for key features. Still, she says, “I have used Marco Polo every single day since I downloaded the app in March... I don’t know how I would have managed the most grueling months without it.”

When you arrive on Marco Polo’s home screen, a list of your chats with individual friends and various groups awaits you. In App Store reviews and coverage of the app, the fun of group chats — one for each of your circles: siblings, work friends, college friends — is key to Marco Polo’s appeal. “Polo has largely replaced our text chain,” Vogue’s review reads. Group chats compile all the videos its members send to each other, for each member to watch and respond to on their own time.

Unlike Snapchat, Marco Polo doesn’t limit message length or delete the messages you send after a certain amount of time. Instead, it stores all Polos on the cloud, creating an archive for each group that serves as a video photo album. Some have found this feature charming. Sanders wrote for Worcester Magazine: “My friends joke that I am actually saving the stream of hundreds of video clips for a future art installation that will examine life in the time of COVID… The truth is, a lot of important moments have taken place over Marco Polo for us this year.”

The Marco Polo Plus update left non-paying users with only bare-bones features. Based on App Store complaints, the “2x” function — which lets you fast forward through messages at 1.5-3x speed — is one of the app’s most beloved features. It’s now unavailable to non-paying users. According to Vogue, users even referred to the feature as a verb: “‘2x me’ is a frequent, self-aware refrain in my Polo groups, when someone finds themselves getting long-winded in the middle of a message.”

Marco Polo is for video-chatting, but it has all-purpose options for Marco Polo Plus members. When you’re not camera ready, you can also chime into the conversation via voice recordings, photos you snap or plucked from your gallery or written text. Marco Polo Plus also offers a group chat “scratchpad” for users to draft responses. 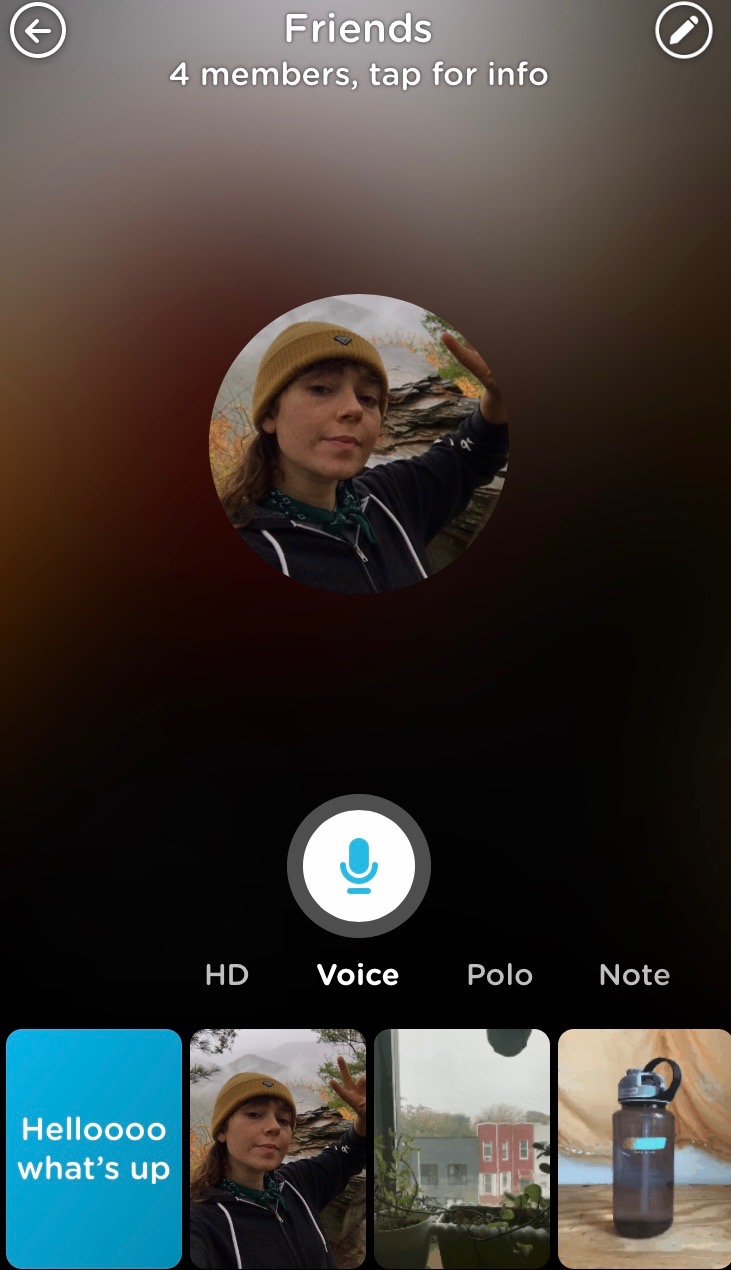 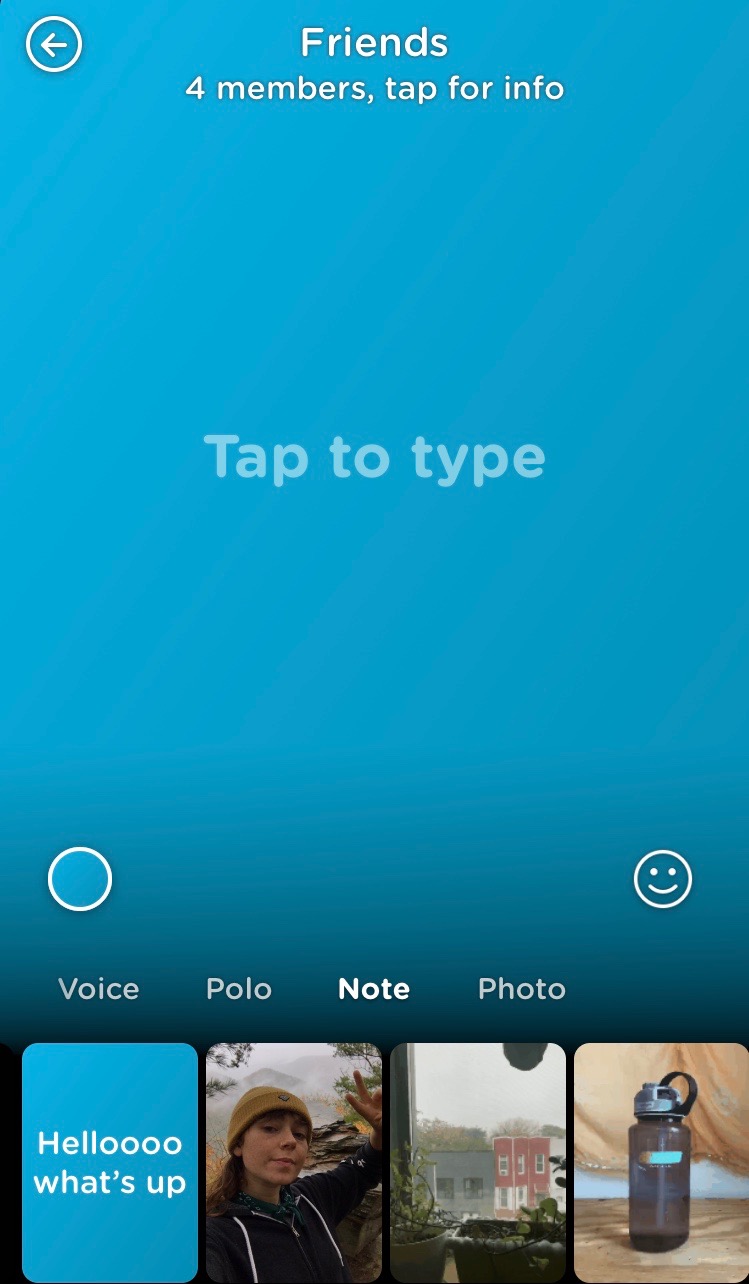 Marco Polo’s aesthetic is the polar opposite of Snapchat. It’s clean and uncluttered, no ads, no gadgets, no toys, no bold colors. This is something people initially praised. However, in recent updates, the app has added a few playful features. It offers Apple Photobooth-era filters (think “sepia”), but nothing as flashy Instagram Story’s face-tuning animations. Like on Instagram Live, you can react to other people’s Polos with emojis as you watch them. HD is another Plus feature for those who want a crisper image.

Marco Polo doesn’t appear to be seriously challenging Snapchat or touching its bottom line, especially given the latter app has found success expanding into editorial and TV content. On the contrary, Snapchat’s social media stats are solid and its parent company Snap’s stock has been soaring in recent weeks, currently up 158% year-over-year. This makes sense: its loudest fans are people who were highly unlikely to be on Snapchat in the first place.

Marco Polo could really make a dent by introducing older users to casual, short-form video messaging and showing them it can replace hours on Zoom and FaceTime. Quarantine might be lifting, but a third wave of the virus looms and people are only getting more exhausted with video calls. Marco Polo’s practical uses for staying in touch with friends and family during quarantine has boosted its popularity. And if the app can get adults as addicted to pinging friends and family at all times of the day as Snapchat did with teenagers and twenty-somethings, Marco Polo will stick around.