The ambitious, bold and hungry start their week with The Business of Business!
Markets
3.4.19   7:33 PM Markets

Mapping the future of the Gap empire, Old Navy, and Janie & Jack

In one weekend, Gap Inc. spun out Old Navy, announced that it would close 230 stores, and said it would acquire Janie & Jack from Gymboree. Here's a breakdown of all of that in map form.

Over the weekend, Gap Inc. ($GPS) announced several moves that are changing the course of its entire business.

With over three years of store location data saved on this massive clothier chain, we pulled up four maps to give some perspective on how the company has shrunk down, split off, and gained brands over time. 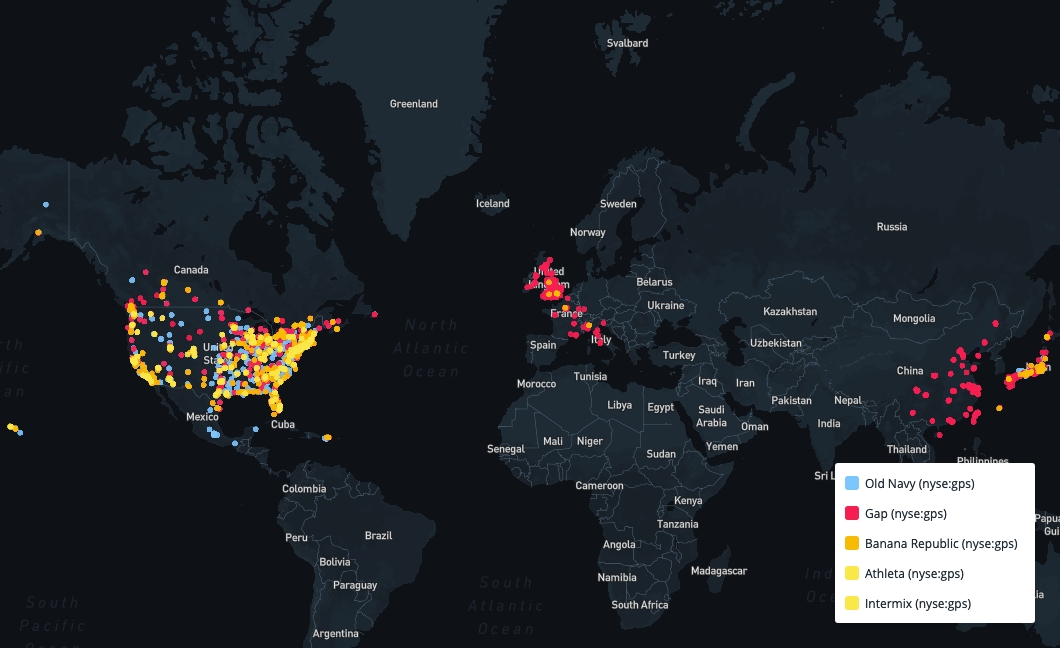 In terms of how many stores Gap Inc. had in its history, the aggregated number from data taken as far back as December 2015 is 3,982 locations.

The eponymous Gap had the most locations overall, with a 600 store plus gap separating it and its discount sister store brand Old Navy. Higher end brands in the company's portfolio, such as Banana Republic, have less of an overall footprint. 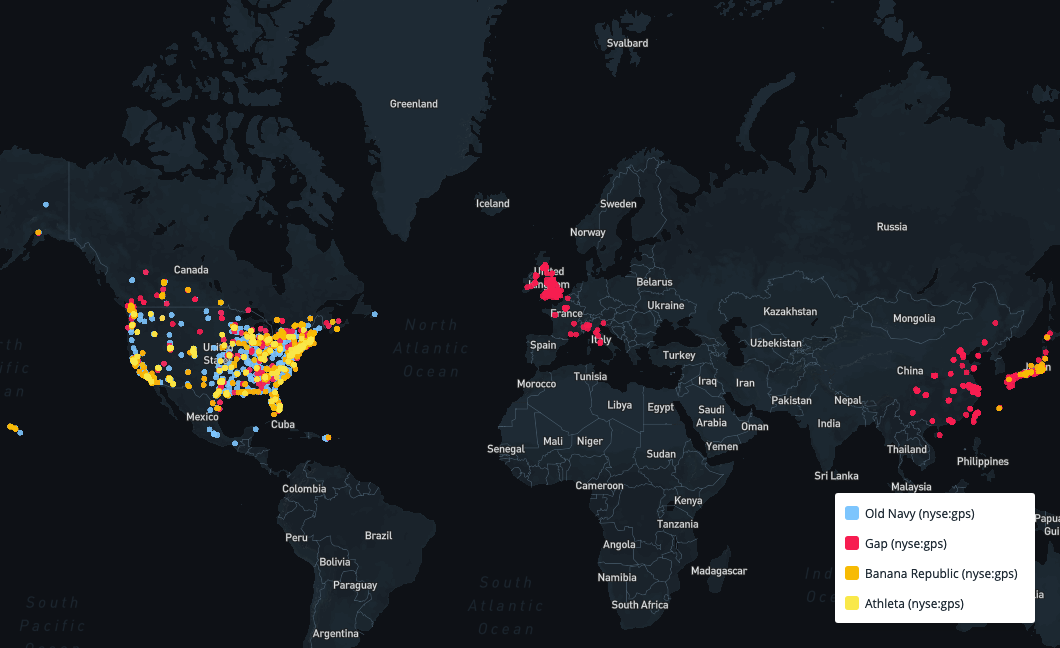 Over the past few years, Gap saw its global footprint shrink across four of its major brands.

It's flagship brand saw the most change, as nearly a quarter of its overall retail footprint saw closures both domestically and abroad.

Location-wise, the Gap closed a nearly equal amount of stores when comparing American and international locations. There were 181 delistings of stores in Italy, Japan, Canada, China, and the United Kingdom combined compared to 179 in the United States.

The company is set to also close another 230 Gap stores during the coming months, which would account for 15.47% of its portfolio for its namesake store. 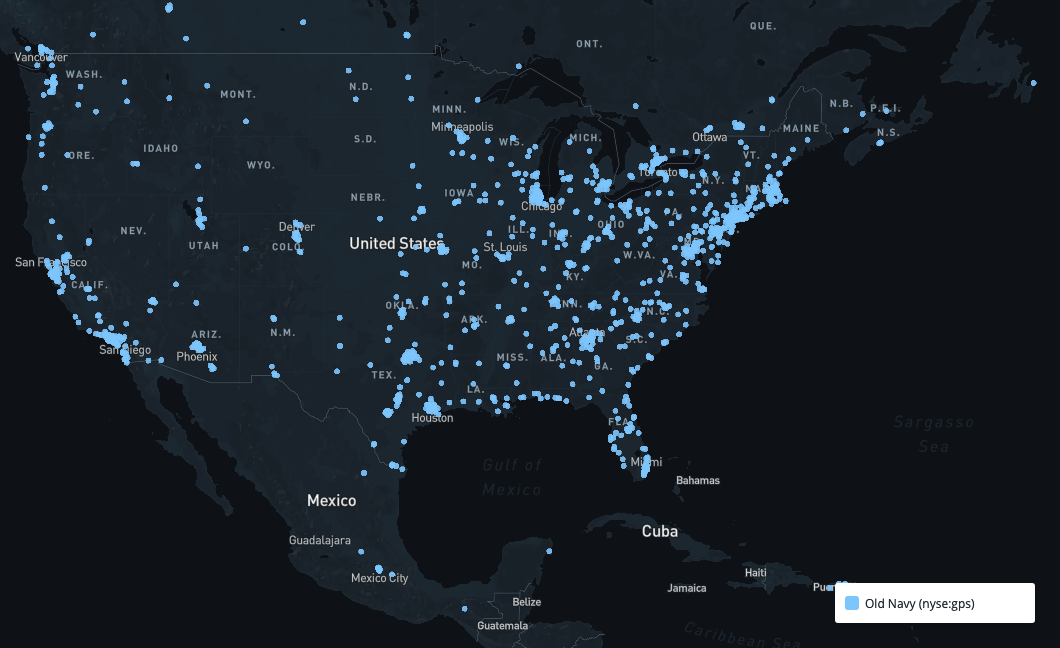 Old Navy, the discount brand for Gap Inc, will see its 1,122-store strong portfolio become its own company, as it will distance itself from Gap by continuing to offer more frugal fashion in the U.S., Canada, Mexico, and China.

The breakdown of Old Navy's portfolio sees just over 1,000 stores (1,002) in the U.S., with Canada and Mexico combining for another 100 stores. China fills the gap... um... the remaining stores in its holdings.

Unsurprisingly for a retail chain, Old Navy has the most stores in the four most populated states in the country: California, Texas, New York, and Florida. In terms of the cities with the most Old Navy stores, Houston, San Antonio, and Charlotte round up the top-three. These three cities have a diverse range of incomes, making them prime targets for a store known for discounts and deals. 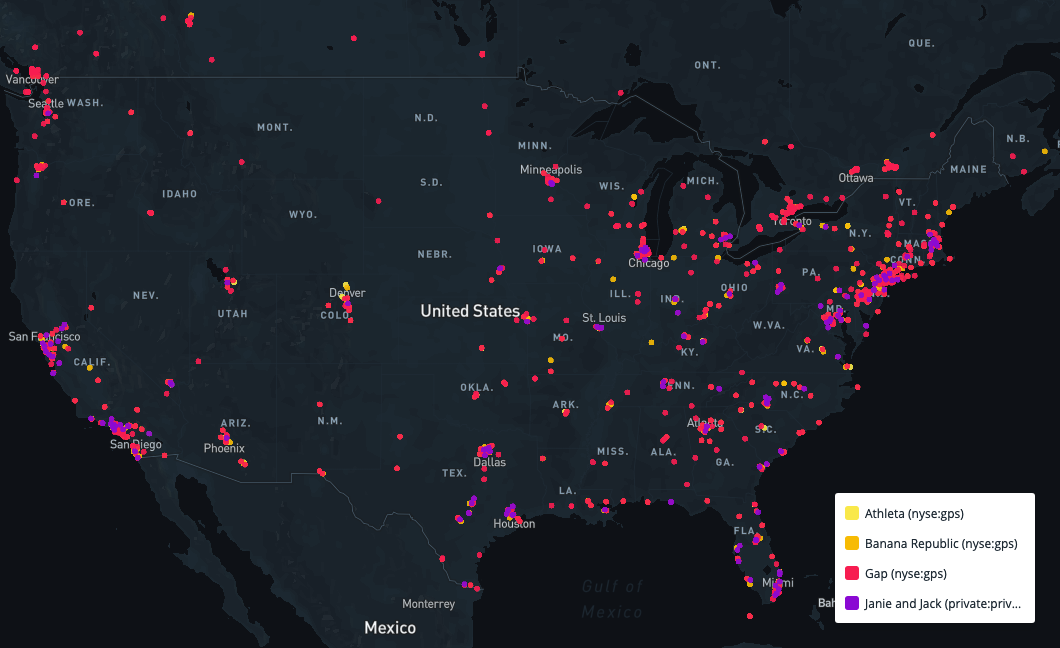 Along with spinning out Old Navy, Gap Inc. also made moves to acquire the failing Gymboree ($PRIVATE:PRIV_GYMBOREE) company's Janie & Jack, the high-end children's fashion line. This includes 139 retail locations in the United States, which it will add to Gap's 1,000 plus remaining stores.

The move highlights what Gap Inc. is transforming into; a fast fashion brand that also dips its toes into high-end, but not necessarily luxury, fashion. Gap is distancing itself from $1 flip-flops before the Fourth of July and buying into linen blazers for toddlers.

Will these moves help it survive the retail apocalypse? Only time will tell.