The ambitious, bold and hungry start their week with The Business of Business!
Features
10.19.20   7:30 PM Features

These 10 food companies make everything you eat and drink

From liquor to candy to cheese, most of us only buy groceries from just a handful of companies.

Last month, we dove into the beauty companies that own your beat. Today, we’re opening up your fridge. And your freezer. And your pantry. And your liquor shelf.

Just like your bathroom cabinet, your kitchen is stocked with a rainbow of labels and brands. Behind the scenes, however, a handful of multi-billion dollar conglomerates produce the vast majority of the food and drinks we consume. This global supply chain dominance is obscured behind the arrays of specialty products and niche brands industry leaders have bought out or started making over the years. That Wicked Weed craft beer from Ashville you picked out? An Anheuser-Busch product. Deciding between Bear Naked or Kashi? Both are sold by Kellogg’s. Stonyfield yogurt this week or should you treat yourself to Siggis? You’re buying from the French dairy company Lactalis either way. Jim Beam or splurge on Maker’s Mark? Both mean you’ll pay up to Japanese liquor maker Suntory.

By 2012, the four largest food and agriculture companies controlled 82% of the beef packing industry, 85% of soybean processing and 63% of pork, according to data compiled by University of Missouri-Colombia. By 2015, four companies owned 60% of the chicken market. A lack of enforcement of antitrust laws that have allowed for major food industry mergers like Monsanto and Bayer; Kraft, Heinz and Cadbury, Danone and WhiteWave, Quaker Oats and Snapple have accelerated this trend, which parallels those in tech, media, retail and many other industries.

As the pandemic has kept us out of restaurants and cooking three meals a day at home, these gigantic companies have a bigger influence over our daily lives than ever. Here are the 10 food companies who own your fridge, ranked by their number of subsidiary brands. 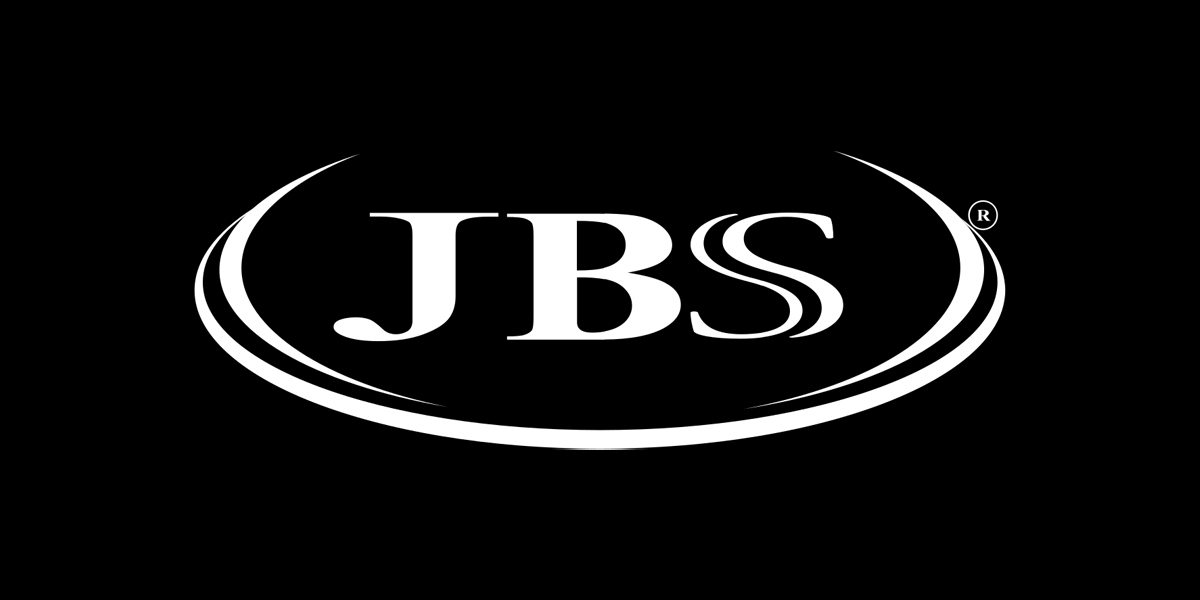 JBS won’t be a familiar name like some of its peer food supply leaders, but the company holds the title of the world's largest meatpacker. Founded by a rancher in Brazil in 1953, today, JBS has a whopping 95 subsidiary brands to their name. These brands include 5 Star Beef, Primo, Sampco, Blue Ribbon, Swift Premium, Gold ‘n’ Plump, Gold Kist, Plumrose and many others. JBS also owns a majority share in the world’s second largest poultry brand Pilgrim’s, the second largest poultry brand in the US. 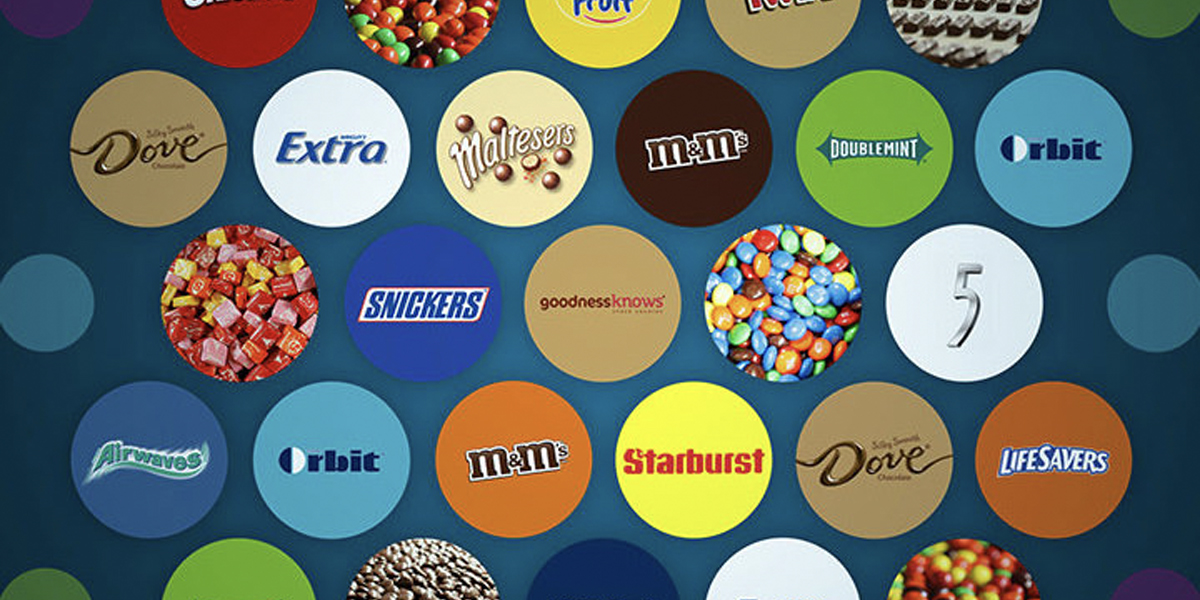 Best associated with their signature chocolate bar, Mars dominates a few different aisles of the grocery store, including pet care, candy and prepared foods. Brands like Iams and Pedigree, Wrigley’s Gum, M&M and Dove, and Uncle Ben’s Rice and Dolmio pasta sauce all sit under their ownership. 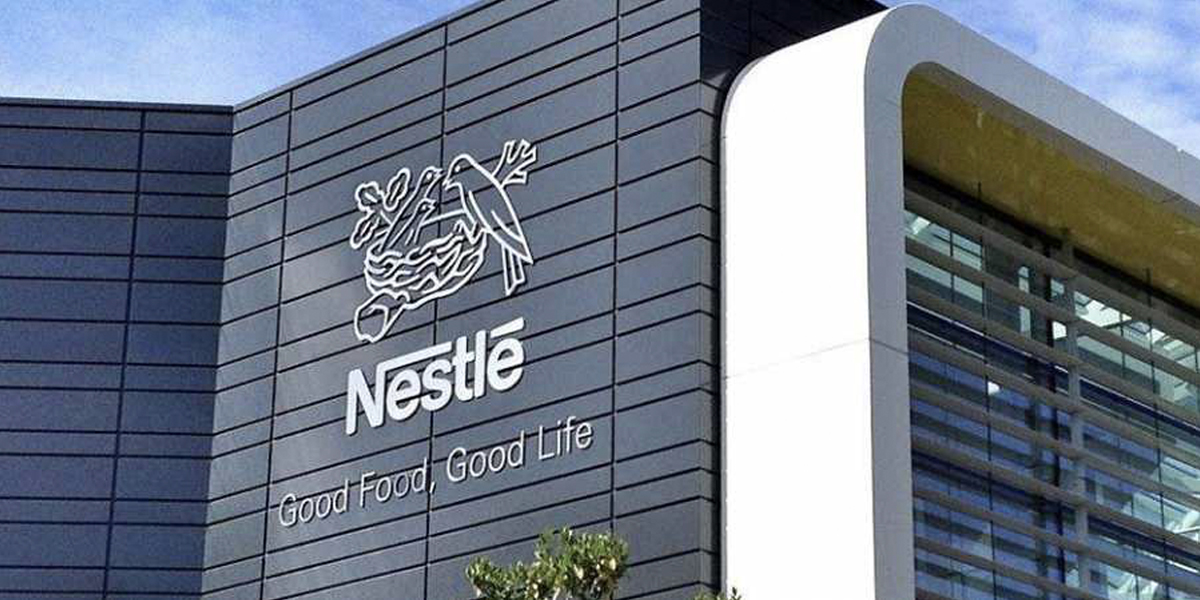 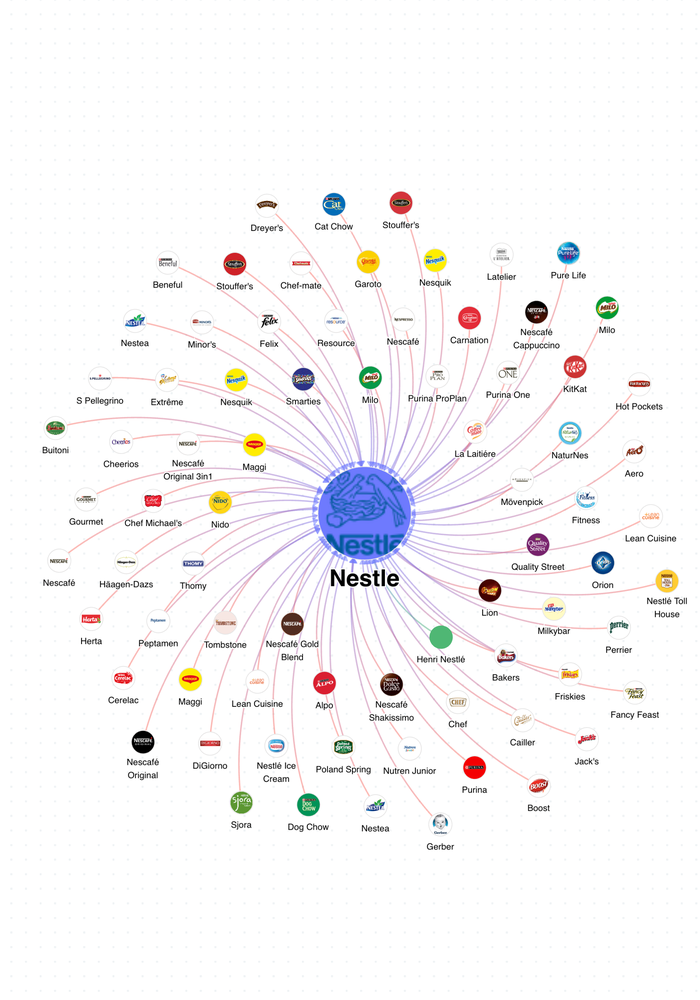 Though Nestle has fewer brands to their name than Mars or JBS, the Swiss superpower has held the title of the world’s biggest food company since 2017. Baby food, bottled water, candy, coffee, frozen foods and ice cream are all foods you’re probably buying from Nestle, if you’re a fan of San Pellegrino, KitKat, Lean Cuisine, Häagen-Dazs or Purina. 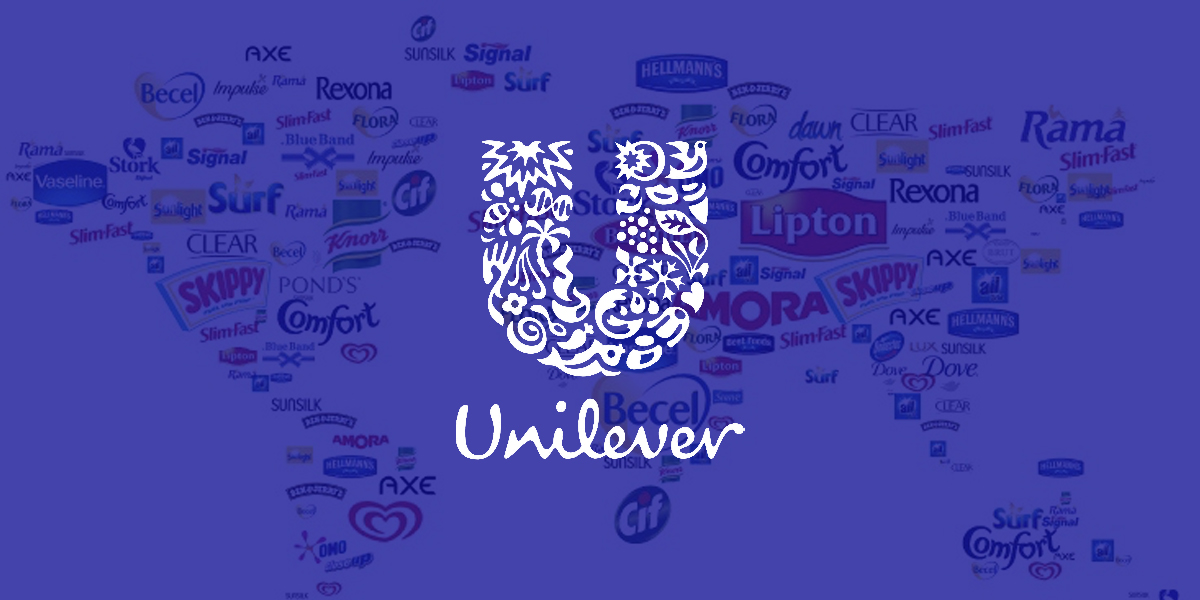 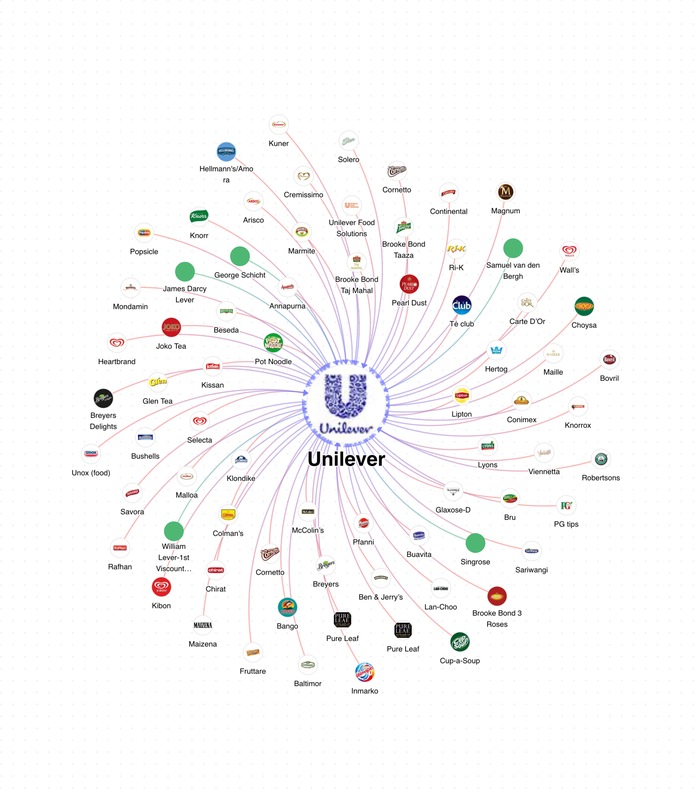 Unilever ranked at No. 7 on our round-up of the most dominant beauty companies. That the consumer goods overlord shows up in the top five of this list as well reveals their outsized influence. Their edible products can be found in the ice cream, beverages, condiment and snack sections. Unilever is especially dominant in tea and ice cream, distributing frozen favorites like Breyers, Klondike, Ben & Jerry’s, Popsicle and Magnum and dozens of tea products including Pure Leaf, Lipton and Selecta. 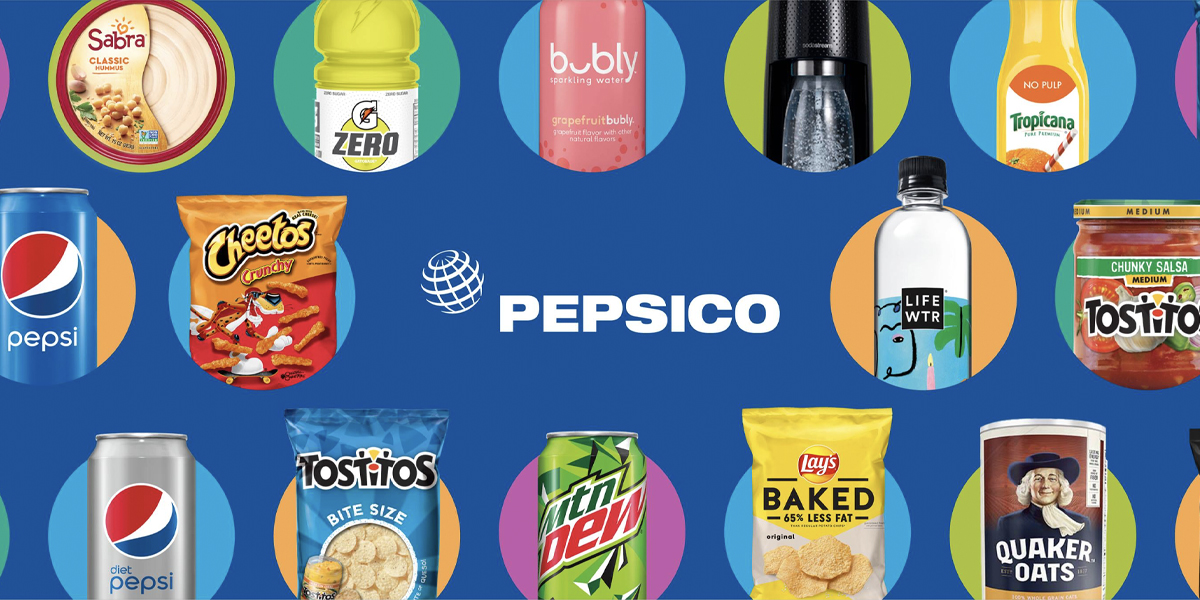 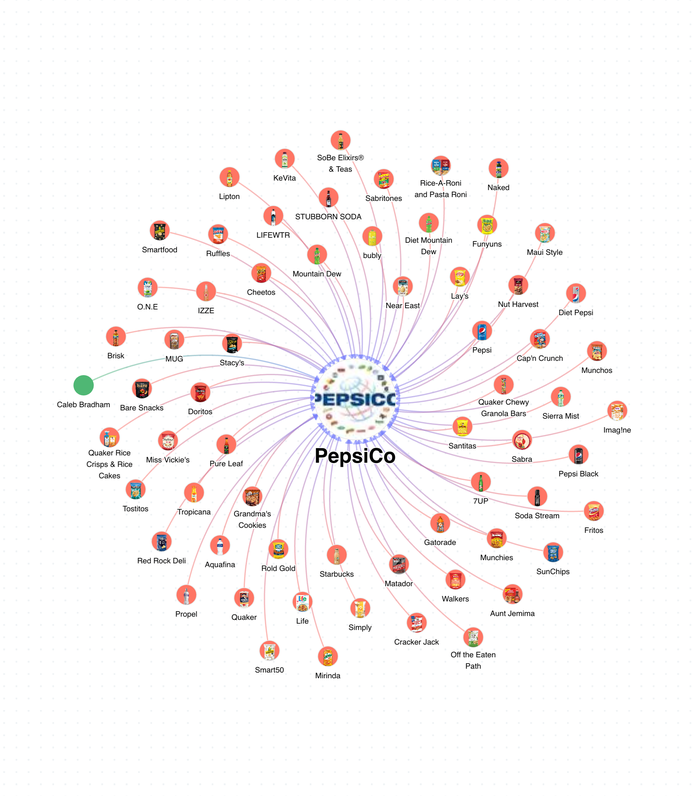 Most of the companies on this list exist behind the scenes, but most people have a general awareness that whether they’re drinking Pepsi itself, Mountain Dew or Sierra Mist, they’re buying from PepsiCo. However, the beverage giant’s reach goes farther than most know. PepsiCo has snatched up a number of trendy snacks and drinks recently like Naked juices, bubly and Izze seltzer brands, KeVita kombucha and Stacy’s pita chips. 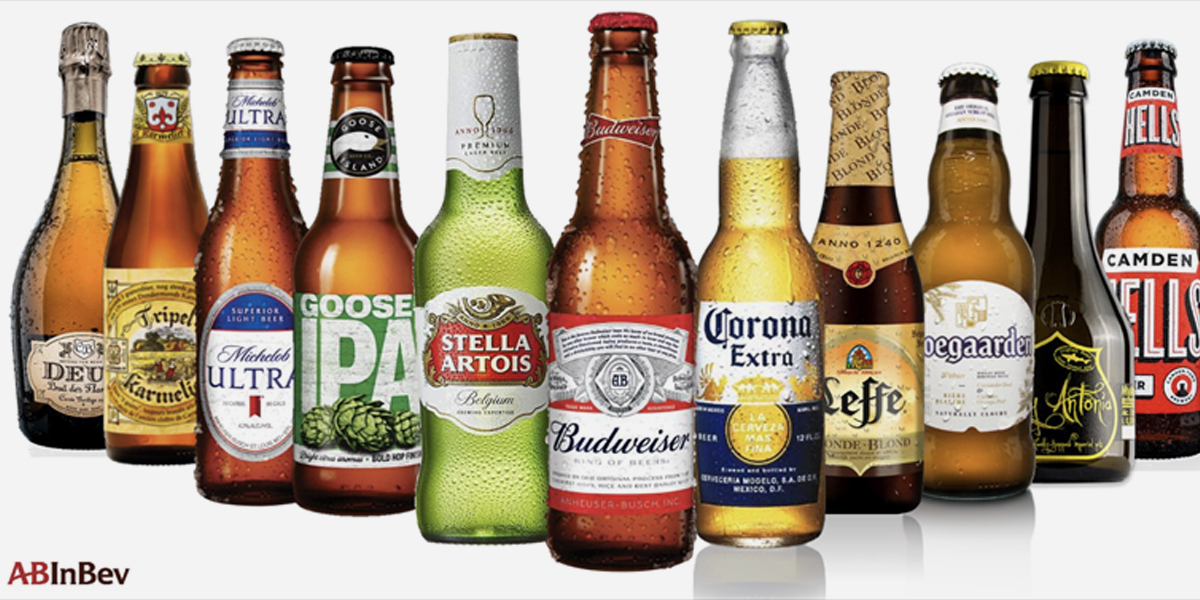 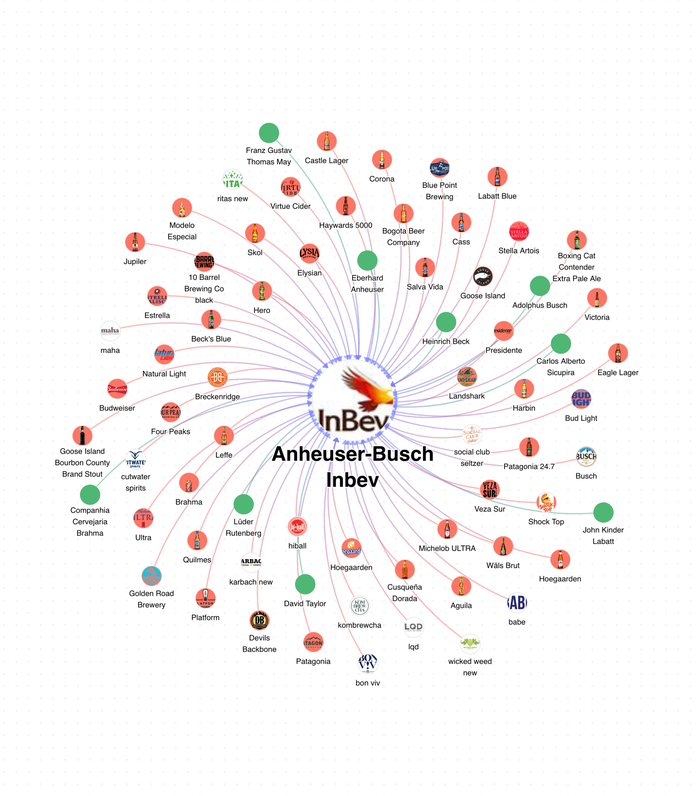 Anheuser Busch was the largest beer company in the United States when it was bought by Inbev, a brewing company formed by the merger between Belgium-based Interbrew and Brazilian brewers Ambev, in 2008. The three-pronged company became Anheuser Busch Inbev, the largest beer company in the world, surpassing the previous largest brewer, England’s SABmiller, which it later acquired in 2016. They make all your dad and your ex-boyfriend’s favorite beers — Budweiser, Natty Lite, Stella Artois, Beck’s, Hoegarden and Leffe, as well as global favorites like Michelob Ultra, Corona, Modelo and Cass, the No. 1 beer in South Korea. They’ve also more or less acquired the second tier of beers, with acquisitions like Elysian, Golden Road, Four Peaks, Platform, Goose Island and Patagonia, and delved into the world of canned cocktails, hard seltzers and kombuchas. 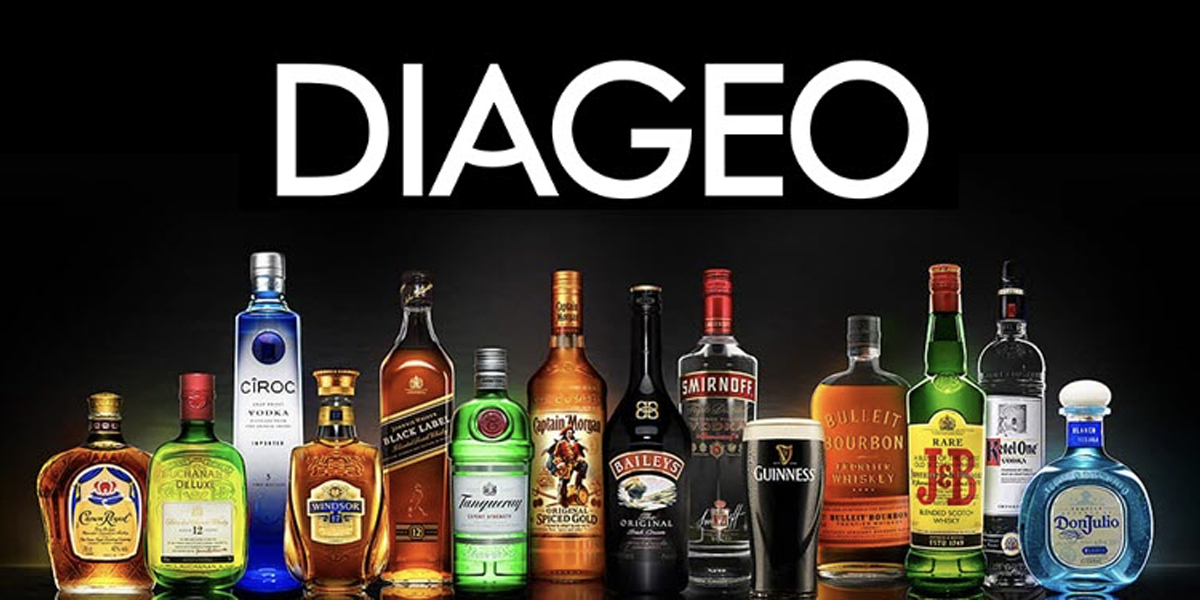 British producer of beer and spirits Diageo also hides behind its flagship names like Guiness, the brewery that was one half of its founding merger along with Grand Metropolitan. Since 1997, it’s become one of the largest alcohol conglomerates in the world scooping up the entire contents of a bar shelf over the last two decades, including labels like Johnnie Walker, Crown Royal, Seagrams, Bailey’s, Ciroc, Ketel One, Smirnoff, Capitain Morgan, Don Julio and Tanqueray. 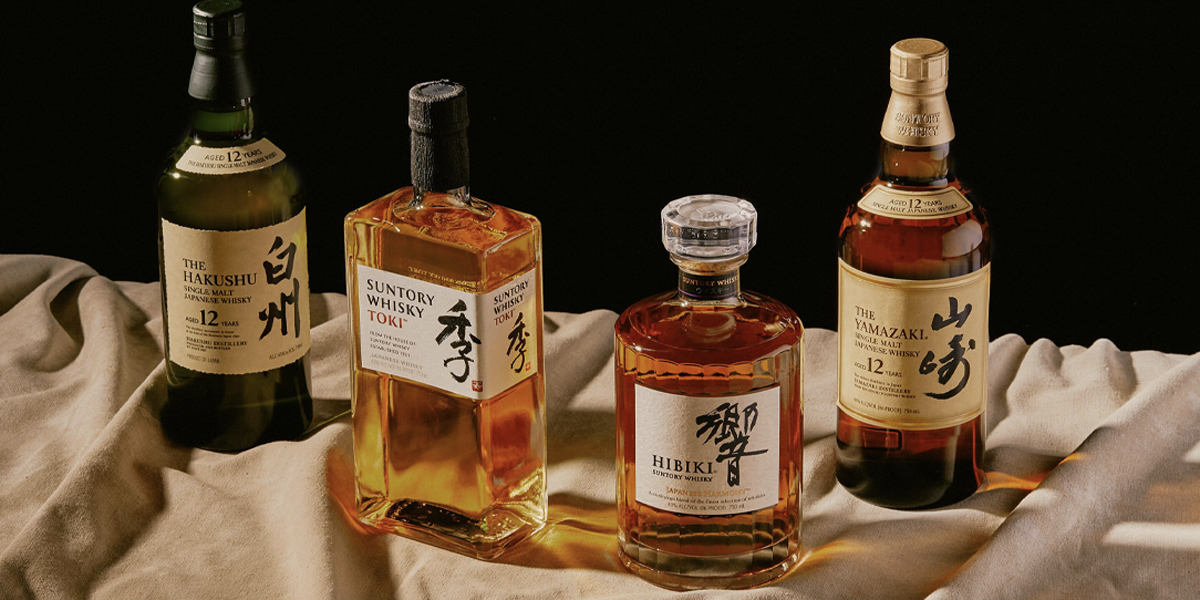 Japanese multinational corporation Suntory will be one of the less familiar names on this list, at least to Americans. However, the company is one of the oldest distilleries in the elite world of Japanese whiskey as well as the global one as the owners of both Maker’s Mark and Jim Beam. They’ve also crept up in the global beverage market with products like Orangina and Ribena, teas and health supplements. Suntory is also one of the largest distributors of Pepsi products in Asia. 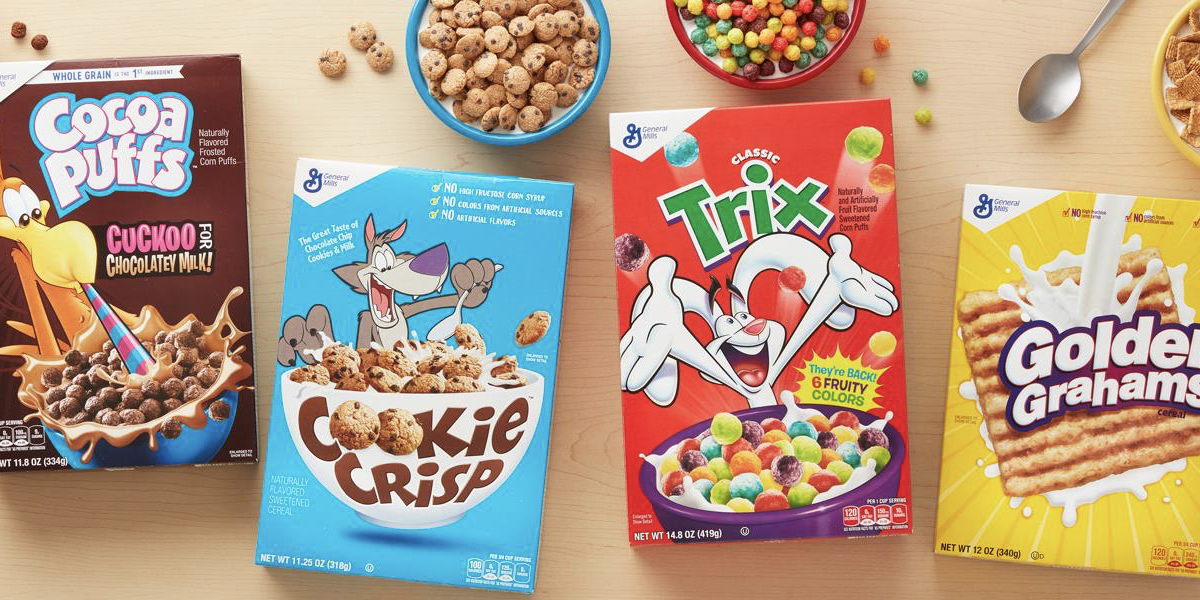 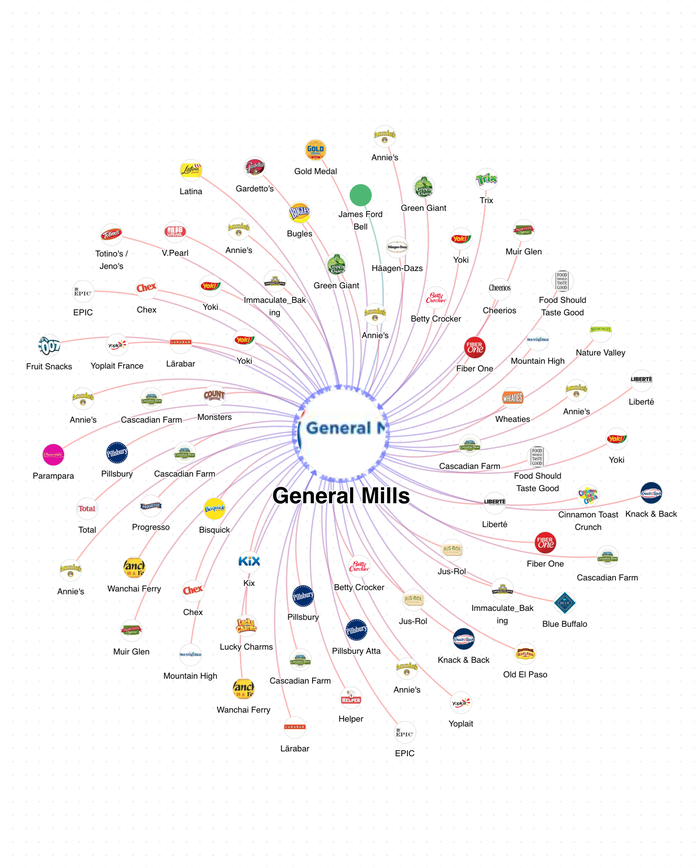 Minneapolis-based powerhouse General Mills is best known for their cereal brands which include Fiber One, Kix, Cheerios, Cinnamon Toast Crunch, Lucky Charm, Chex, Wheaties and many more. However, they’ve quietly taken over the rest of our kitchens as well, especially during quarantine — they make the Gold Medal flour that was out of stock everywhere as America collectively took up bread baking. They also sell the baking products like Betty Crocker and Pillsbury we turned to when we couldn't find it. Not to mention, quick dinner staples like Green Giant, Annie’s, Progresso and Old El Paso, and snacks like Food Should Taste Good, Yoplait, Fruit Snacks and Larabar. 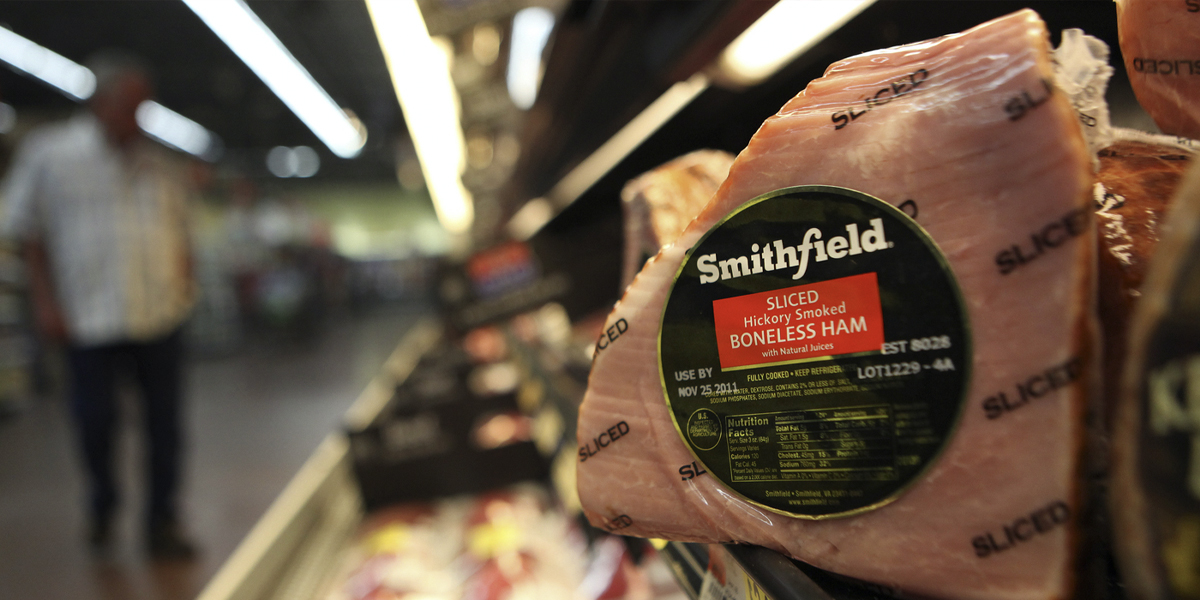 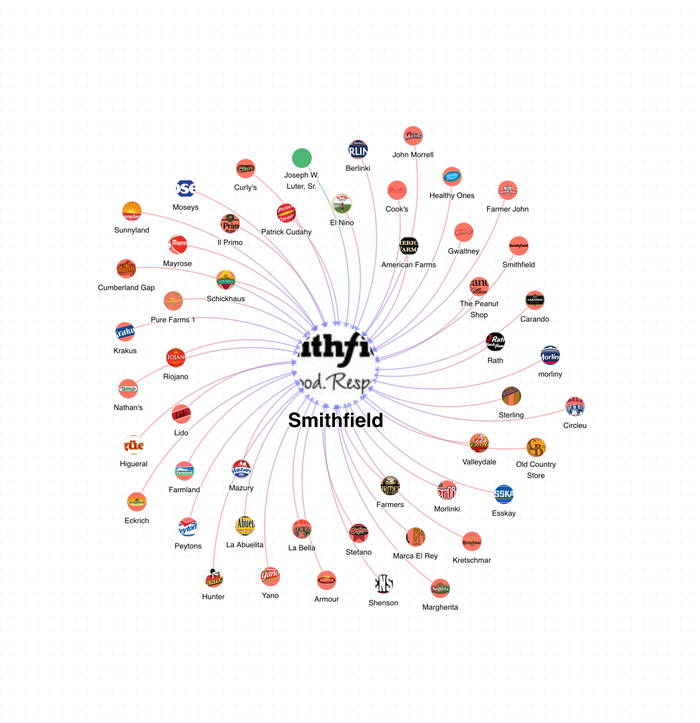 Smithfield Foods, owned by Chinese company WH Group, is the largest pork producer in the world and the hot dog king of the grocery store. You can thank the company for Nathan’s, Berlinki, Farmer John, Gwaltney and Eckrich’s hot dogs, as well as for Cumberland Gap ham, Smithfield bacon and sausage, Marca El Rey chorizo, Il Primo salami and much more.