The ambitious, bold and hungry start their week with The Business of Business!
Features
5.10.22   4:07 PM Features

The weather outside is warming up and people are starting to wear sandals, flip flops, and Crocs again. Why is this ugly shoe so enduringly popular?

Twenty years ago, one of the most divisive shoe styles hit the market. Today, people still love them — or hate them — just as much.

We’re talking, of course, about Crocs. Nurses, doctors, and other people who spend long hours on their feet love them. Fashionistas loathe them and often refer to them as “an effective form of birth control,” meaning a man or woman wearing Crocs is immediately dismissed as a suitable partner.

Now, as we emerge from the worst of the Covid-19 pandemic, and two years of working from home in the most comfortable clothing we can find, many people no longer care as much about what others think of what they’re wearing. With the weather warming up, more and more Crocs are popping up on people’s feet in more and more public places.

While it’s always fun to mock Crocs, the truth is that the shoes are a remarkable business success story. Here is how they became the ultimate anti-fashion staple in so many wardrobes.

In 2002, Lyndon Hanson was down on his luck. He had just turned 40 and was going through a real mid-life crisis. His wife left him and took their kids with her. He lost his job in the days after the 9/11 attacks. He lost his house. His mom died. He had no idea what to do.

Two of his friends, Scott Seamans and George Boedecker invited him to go to Mexico and have some fun. Seamans was working on designing a clog with cutouts in it for a Canadian company, but the company wasn’t selling them. Seamans wasn’t going to give up on the clog because he happened to think the shoes were perfect for boating – they were comfortable, slip-resistant, and would float. It was Seamans’ idea to put the strap around the back of the clog so it would stay on feet.

Seamans brought the shoes to Mexico and asked Hanson and Boedecker to wear them. Both man thought the shoes were exceptionally ugly, but Seamans pressed on, stressing how comfortable and useful they were on the deck of a boat. After a few days, Hanson and Boedecker were sold on the odd looking shoes for all the same reasons that Seamans was. Seamans was an inventor, but none of the three men were from the footwear industry and they really had no idea how to make, market, and sell the shoes.

The founders took 200 pairs of their unusual shoes to a boat show in Fort Lauderdale in 2002 and to their immense surprise they sold every single one. Adding to their surprise was the fact that it wasn’t just boat owners buying the shoes. Hospital employees and restaurant workers bought them too.

The strange looking shoes took off like wildfire. Before long, Hanson and Boedecker decided to make kids sizes too --- and those were also an enormous success. Kids love the bright colors of the shoes and they are simple enough to take on and off, allowing the youngest of kids to put their own shoes on.

In June 2004, Crocs acquired Foam Creations so they could have exclusive rights to the proprietary foam, Croslite, which molds to the wearer’s foot while remaining breathable. As of 2017, Crocs has sold 300 million pairs of shoes. In 2020, the company offered healthcare workers a free pair of Crocs and sent 100,000 pairs of Crocs to hospitals to be given to its staff.

It hasn’t always been smooth sailing for Crocs. In the spring of 2018, the shoe maker saw falling profits. In the fourth quarter of that year, Crocs posted a loss of $28.3 million, which was a 41 cent loss per share, significantly more than the 33 cents a share analysts were expecting for the same quarter.

The problem was traced to the company’s habit of selling its products at a discount. It was more than just seasons sales, overall, the entire Crocs product line was selling for an average of 35% off. Because Crocs were basically always on sale, its customers held off on buying new pairs because they knew that a lower price was always just around the corner.

In an effort to bring new customers in and retain existing customers, in 2018 Crocs hired a celebrity spokesperson in a rebranding effort. Drew Barrymore was hired to launch a new product collection and reinforce the laid back vibe that Crocs is known for. The campaign was called “Come As You Are” and clearly had a positive impact on the company as Barrymore was brought back in March 2022 for a new set of Crocs ads.

Crocs as a company certainly doesn’t take itself too seriously and one just needs to look at some branding campaigns the footwear manufacturer has entered into for proof.

In 2020, the brand partnered with KFC to debut Crocs with a fried chicken pattern all over them. The chicken Crocs also came with two, chicken scented, drumstick shaped charms that could be affixed to the show. (The result was hideous, but an instant hit.) 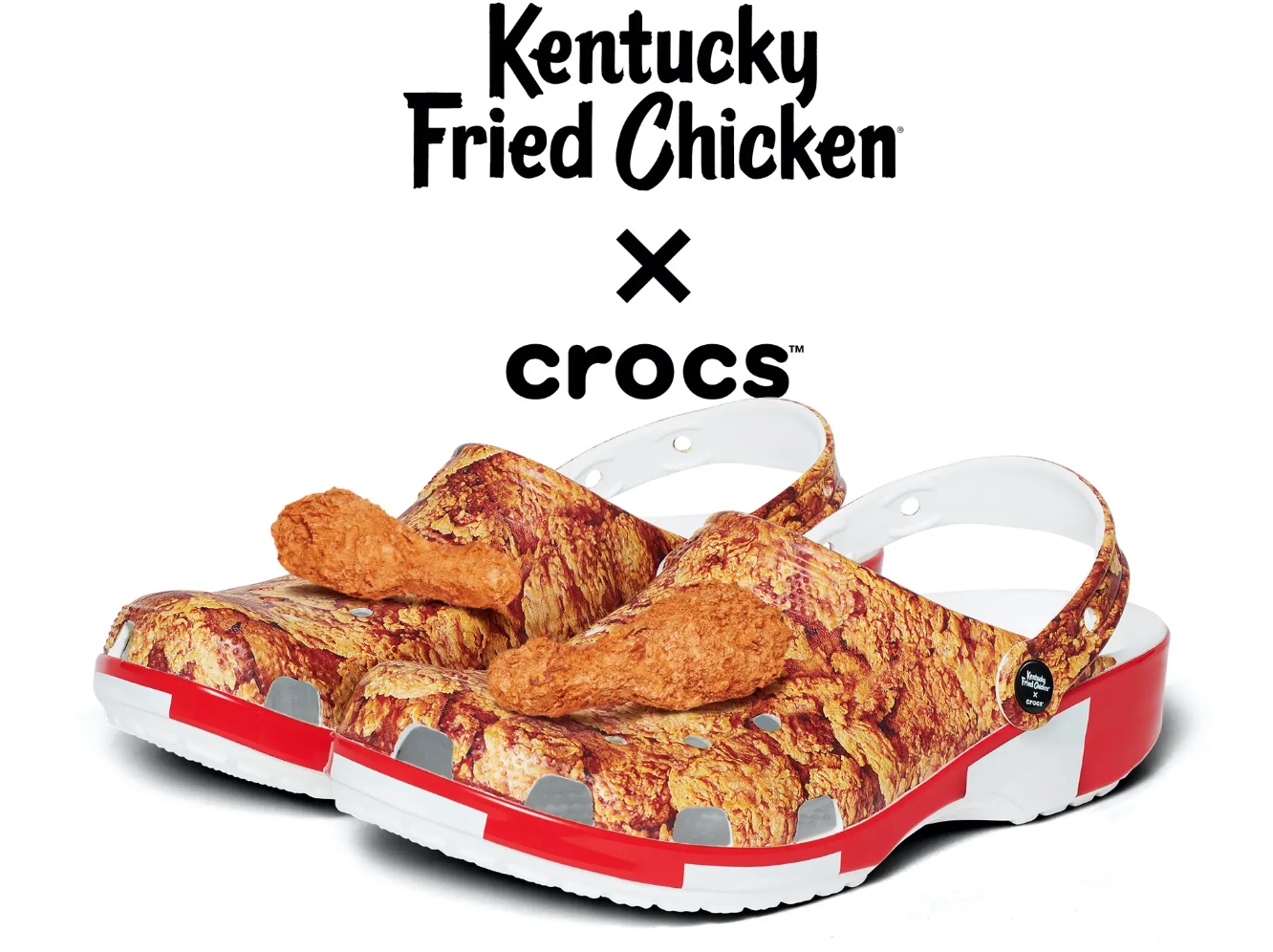 The KFC-Crocs cross promotion resulted in this unholy creation.

In 2021, Crocs debuted a shoe with cannabis leaves printed all over it. The shoe proved to be especially popular with marijuana enthusiasts.

It’s not all tongue-in-cheek crossovers though. In 2018, Crocs partnered with Balenciaga to create a designer Croc that sold for $600 and up.

Crocs comes roaring back as the pandemic wanes

In the first quarter of 2021, Crocs saw its stock value surge to $460 million in revenue, which was up 61% from the prior year, and higher than the $415 million analysts predicted. CEO Andrew Rees attributed surging sales to the demand for comfort shoes being “stronger than ever.” The earnings report drove company shares up 16%. In the 12 months from May 2020 to April 2021, shares were up 260%.

The brand released light-up Lightning McQueen Crocs, the adult versions of which quickly sold out online. A search for the Cars movie tie-in Crocs shows they are going for nearly $400 on eBay.

The pandemic also brought new customers to Crocs. As we were all sheltering at home, comfort in clothing and shoes became the way of life for most people. Collabs with Post Malone, Justin Bieber, and Priyanka Chopra also helped to raise the profile of the company as worth looking at for more than just nurses.

For better or worse, Crocs are undeniably here to stay — and have wedged themselves into a unique space in the apparel industry. They are ugly, but people still love them.  Celebrity fans of the shoe include Ariana Grande, Nicki Minaj, and Pharrell.

Regular people also aren’t shy about sharing their affection for Crocs, even if they also find them unattractive. When I interviewed people for this article, one nurse told me: “I’ve hated Crocs since they hit the scene in my era of the early 2000s. I swore I wouldn’t be caught dead in them.”

But later, “I inherited a pair that were actually received in a promotional event Crocs had for nurses. The golden baddies haven’t left my feet since.”