The ambitious, bold and hungry start their week with The Business of Business!
Markets
7.16.21   7:38 PM Markets

The Charlotte Ledger was launched in 2019 and is run by two former Charlotte Observer writers.

Journalists on Twitter frequently bemoan the death of local reporting and the rise of Substack, but a newsletter publication in Charlotte, North Carolina might have them eating their words on both counts.

The Charlotte Ledger, a Substack run by two former writers for the Charlotte Observer, brings in revenue of $12,500 per month from 2,000 paying subscribers, equating to about $150,000 per year, according to Axios. In rough terms (before subtracting fees to Substack and Stripe), that’s more than three times the average salary of a local journalist.

Of course, that’s a long way off from rivaling the Observer, the largest local newspaper in the area. Owned by McClatchy (which was bought out of bankruptcy last year by hedge fund Chatham Asset Management), the Observer currently has about 40 editorial employees, according to its webpage.

Still, the Charlotte Ledger is growing — adding 50-80 net subscribers per month — while the Observer is shrinking. The Observer’s total daily circulation has cratered from 155,497 in 2011 to a current 73,614, including 19,602 digital-only subscribers, according to a recent audit.

Promising “no fluff, no pop-up ads, no time-wasting,” the Substack offers three separate newsletters: One focusing on local business news, one on obituaries and one on transit. The Ledger has come a long way from its founding in 2019. At the time, when former Observer business editor Tony Mecia started it, he had only a rolodex of local newsmakers and 300 Twitter followers. (Now he has only 793, proving you don’t have to be a Twitter rockstar to be a successful content creator.)

Mecia employs former Observer reporter Cristina Bolling as a full-time staff member and some freelancers, with a compensation structure that is aligned with the Ledger’s financial performance, according to Axios. The Arlington, Virginia-based media company Axios, founded by a group of former Politico reporters, is also making a play for local news markets — despite past failed attempts by other startups.

The lure of being able to actually make a living producing a Substack could put additional pressure on legacy media, which is continuing down a long and painful path of falling advertising and subscription revenue and increasing competition from more nimble and lower-cost digital outlets. While few people go to journalism school hoping to get rich, a recent analysis by the WSJ showed just how poor the return on a graduate degree in the field really is.

Median income for journalists from 14 of the top graduate programs in the country ranged from a low of $36,132 to a high of $52,107. Meanwhile, their median debt was frequently well over $30,000. Median debt for University of Southern California journalism graduates was $67,739, while it was $58,500 for Emerson College, $54,936 for Northwestern University and $56,713 for Columbia University graduates.

“As for the ‘elite’ programs, this suggests Mizzou is a way better deal than Columbia or Northwestern,” tweeted Huffington Post labor reporter Dave Jamieson, referring to the $21,000 in median debt compared with the $50,543 in median income for graduates of the University of Missouri. 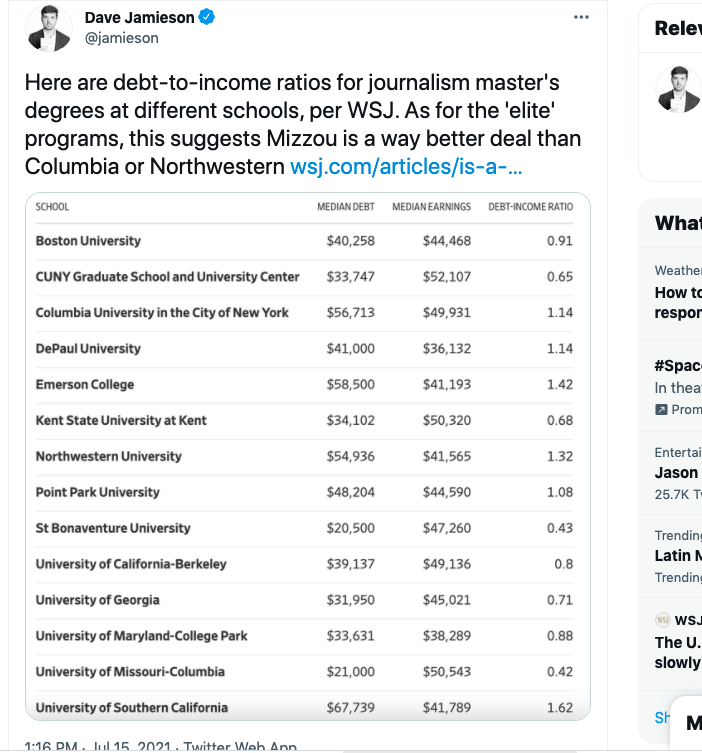 (I have an undergraduate rather than a master’s degree in journalism from Missouri, but I can attest that the school is indeed a relative bargain.)

Over the past several years, “creators,” which include many types of individual content producers such as Substack authors, have emerged as a growing force in the economy. This trend has carried over into major corporations as well. As of May 1, job listings featuring the keyword “creator” in their title or description had increased by a staggering 489,000 percent since 2016, according to data from Thinknum.

San Francisco-based Substack was founded in 2017 by a group that included current CEO Chris Best, who was also a co-founder of the Kik messaging platform. Despite its welcome promise of offering journalists opportunities to get paid for their work without the hassles of freelancing, Substack has taken substantial flak. Journalists have complained about a lack of content moderation, and about big advances the newsletter company paid to some controversial writers who have been kicked off of other platforms.