The ambitious, bold and hungry start their week with The Business of Business!
People
3.12.18   8:52 PM People

Americans love debt. But just how much? Some charts to give you something to ponder.

Consider this: The average personal loan given out by loan giant Lending Club is for $15,000 given to a person with a sub-700 credit score and an income of $6,000 per month.

Here's an uplifting statistic for your day: According to Experian, 73% of Americans die with an average debt balance of $61,554. This - on average - includes mortgage, credit card, auto, personal, and student loans. The average personal loan Americans take to the grave is $14,793.

Speaking of averages, we track and parse pubicly-available personal loan data from industry giant Lending Club ($LC). Looking at their data since 2009, we normalized average loan amount, interest, income, and even credit scores.

That data is below and the results are fascinating and even daunting, especially for the apparent 73% of Americans who have a monthly payment to make. Read it and weep. Or make some payments.

Lending Club offers personal loans of up to $40,000. But that doesn't mean everyone is asking for that much. Not does it mean that Lending Club is offering that much. We looked at average loan principles since 2009, and while the highs and lows over time appear to have normalized a bit, the average loan hovers around $15,000.

Interest rates are largely determined by credit score, but the average rate given out ranges from 12-14% with a peak high point in the 2013-2014 timeframe.

Average income is strikingly narrow around $6,000 per month. Keeping in mind that this is an average, but it's eye-opening to see who is hitting up private lenders for extra cash. 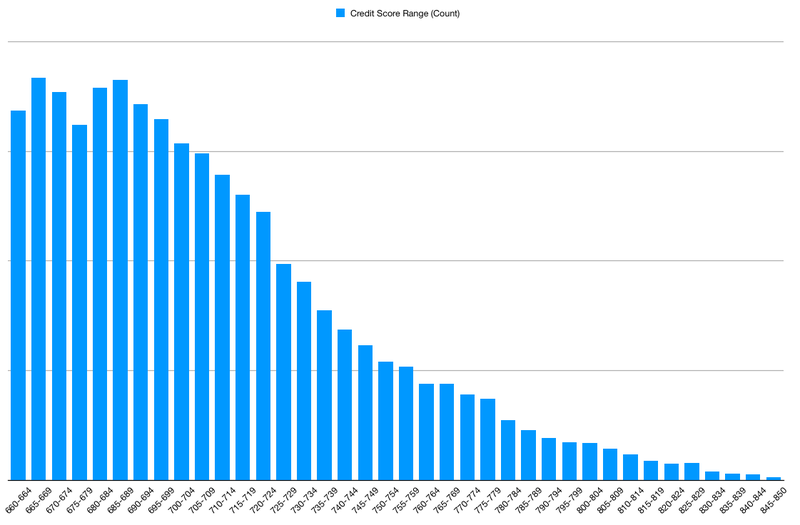 The above bar graph shows number of loans issued by credit score range. This is a snapshot of the past week's loans issued only, but the data remains very similar going back to 2009 when we chart previous weeks. In short, it seems people with lower credit scores are the ones getting deeper into debt. This is likely a self-propagating cycle, of course, as those with higher scores tend to have lower debt-to-income ratios anyway. As counter-intuitive as it sounds, if you want a good credit score, don't use your good credit score to obtain credit.