The ambitious, bold and hungry start their week with The Business of Business!
Features
4.24.19   4:20 PM Features

The price of legal marijuana in the US is 2x that of Canada: a price comparison study

As we found in our recent weed report, the average price of marijuana sold on the streets of the U.S.A. is $319.73 for a high-quality ounce. Meanwhile, the average among four Canadian companies — and Tilray ($TLRY), CannTrust ($TSX:TRST), Liberty Health Sciences ($OTC:LHSIF), and OrganiGram ($OTC:OGRMF) — was $198.73 per ounce, a difference of over $100.

But what about the price of weed in legal dispensaries already in the United States?

For that, we turned to MedMen ($CNSX:MMEN), a multi-state, publicly traded cannabis company based in the United States, as well as Massachusetts based NETA (New England Treatment Access) for answers.

MedMen makes, distributes, and sells cannabis products in states where medical and/or recreational use is legal. It had a rocky 4/20 celebration, as top executives and board members quit while its ex-CFO lambasted the company's work environment. But, outside of that, it's still relatively successful with outlets in six different states in some of the largest metro areas in the country.

NETA (known as NETA Care by its website URL), meanwhile, is a smaller dispensary in Massachusetts, a state that legalized recreational marijuana two years ago. They just opened a dispensary a subway ride away from the city's center, making it a prime brand for analysis.

After converting the price of weed per gram from the Canadian companies into USD and comparing it to the American companies, we saw a startling, yet not surprising, trend: 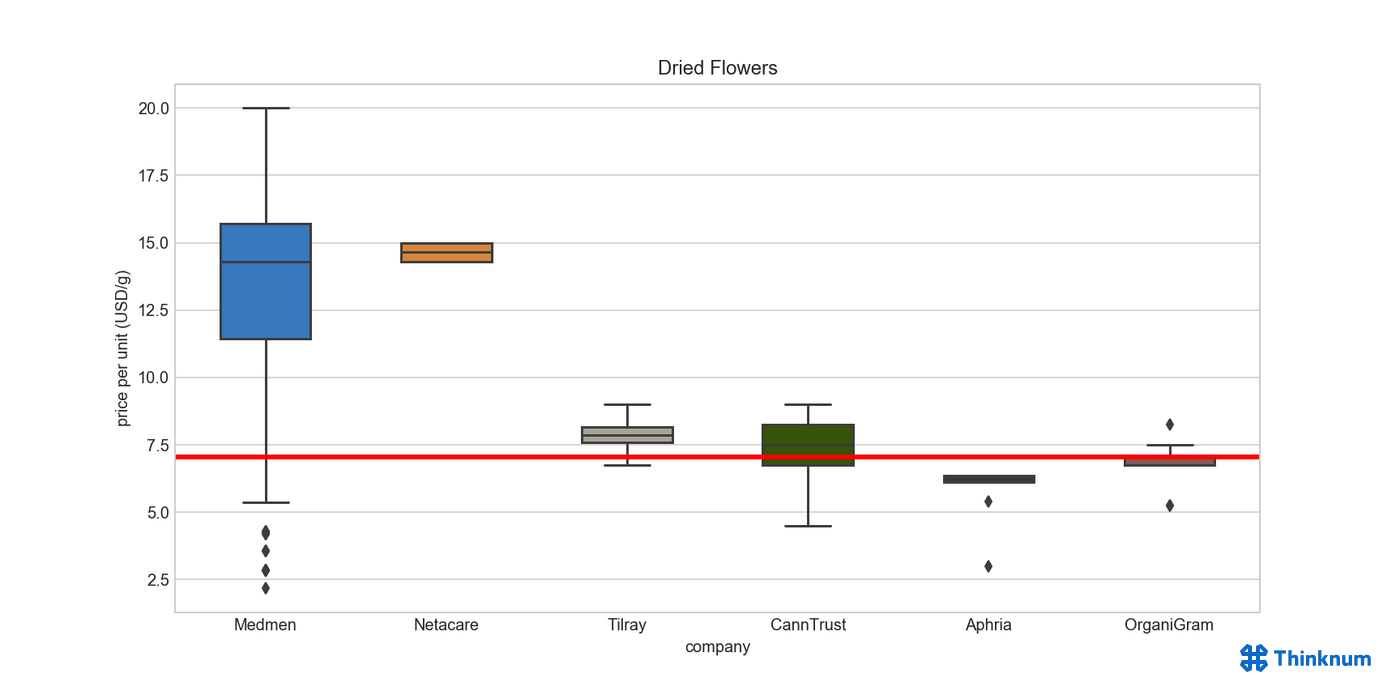 The average price of weed from the four Canadian companies — as indicated by the red line — is $7.04 per gram. Meanwhile, that same gram of marijuana costs $13.05 at MedMen, specifically for dried flowers sold at its San Jose, California dispensary, and $14.64 at NETA Care.

Essentially, the price of "legal" marijuana is nearly double in America than in Canada, and the street price of marijuana is actually cheaper than its corporate cousin. While the average ounce of weed costs $369.96 at MedMen, an "high quality" ounce on the streets of California is $256.64. As for Massachusetts, the difference between NETA Care and a "high quality" street alternative is about $74.50 in favor of the street product.

One could argue that the cost of living is more expensive in the United States than in Canada, and is therefore reasonable to expect more expensive products in our borders. But consumer prices are only 7.5% more expensive in the U.S. than to our neighbors in the North. Even looking at a straight comparison of the Canadian Dollar to the U.S. Dollar, it's only an increase of 33% of purchasing power, not close to 100% as we see when comparing MedMen and NETA Care prices to Candian brands.

As lawmakers at the local, state, and federal are considering the effects of cannabis in our country, it might also be a good idea to look at the overall market price of the industry and see where people are turning to due to the high cost of... well... getting high.