The ambitious, bold and hungry start their week with The Business of Business!
Crypto
8.10.21   3:23 PM Crypto

How it's measured, what its true impact is, and what the green alternatives are: Here's the truth about Bitcoin and energy.

Confusion reigns among crypto haters, crypto nerds, environmental do-gooders and the millions of people watching the crypto revolution from afar. Bitcoin has been pegged as terrible  for the environment, due to its energy-intensive mining facilities all around the globe. But a closer look shows it might actually be the exact opposite — not using as much energy as advertised, and simultaneously pushing crypto towards a greener future.

While no one can deny that Bitcoin mining uses a lot of energy, the discussion around Bitcoin’s greenhouse gas emissions has mostly promoted exaggerated narratives in the media, fueled by questionable academic research.

Energy use and pollution are two different things, and Bitcoin’s greenhouse gas emissions are challenging to quantify. It turns out that many of the most alarming projections rely on questionable methods that overestimate the cryptocurrency’s future energy requirements.

Little research has been done to address this gap, and until we can truly understand how much pollution the energy used in Bitcoin mining causes, we won't be able to make it greener.

Nevertheless, a crucial question remains: In a time when we’re meant to cut down on carbon emissions, why should we be okay with a growing industry of huge data centers that consume vast amounts of energy?

Not as bad as it looks

Bitcoin's heavy use of energy has been at the core of this environmental debate, pushing academic research to try and quantify the cryptocurrency's carbon footprint.

The Cambridge Bitcoin Electricity Consumption Index, one of the most-used guesstimates of Bitcoin’s energy use, puts the cryptocurrency’s annualized consumption at around 110 Terawatt-hours (TWh) as of June 1, 2021, which is double compared to the same time frame in 2020, and roughly equivalent to the energy used by the Netherlands.

But translating energy use into carbon emissions is not straightforward in a relatively opaque industry heavily reliant on renewables. While there is some data on Bitcoin mining practices, granular information is lacking, which makes it extremely difficult to be confident about emission estimates.

This didn’t stop the widely referenced Mora study, published in 2018, to argue that “projected Bitcoin usage, should it follow the rate of adoption of other broadly adopted technologies, could alone produce enough CO2 emissions to push warming above 2 °C within less than three decades.”

The research quickly gained traction in the press and became one of the most cited studies on this issue. However, a closer look showed numerous unrealistic assumptions baked into the model, which was eventually debunked by other academic research.

For example, the study used the number of Bitcoin transactions to determine the cryptocurrency’s emissions, which should raise an immediate red flag.

In reality, transactions have no effect on the block difficulty, which is what requires large amounts of computational power to be solved. An increase in transactions does not have a proportional effect on energy consumption. Data shows that energy use remained relatively flat in periods when the number of transactions reached new highs. This year, Bitcoin's electricity requirements have been on the rise while transactions actually decreased. 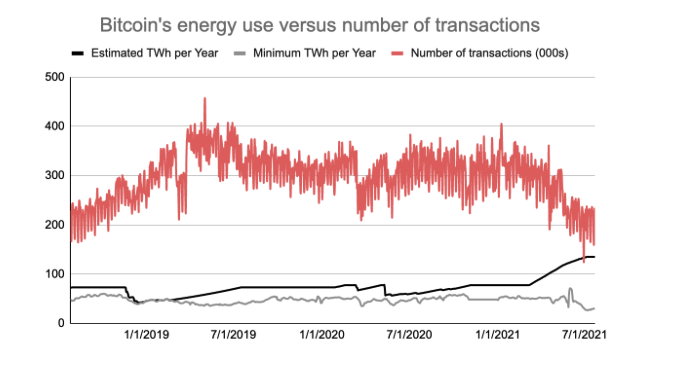 Studies that have focused on the energy usage projections of widely adopted new technologies have been wrong before. One great parallel is when the internet took off in the early 2000s and a Forbes article sounded the alarm, claiming that our digital lives were going to use half of the electric grid — a projection subsequently critiqued and proved to have been too high by at least a factor of four.

Nevertheless, at the time, the article’s findings were picked up by the media and triggered an environmental frenzy. Researchers identified "six news stories, three magazine editorials, and five reports from major investment banks that cited the erroneous Forbes numbers with little or no indication that there was even a debate about them."

Similarly, a July 2019 report by the Shift Project claimed that global emissions generated by online video streaming were equal to that of France, again triggering a flurry of articles in mainstream media, which mainly picked on a claim that “the emissions generated by watching 30 minutes of Netflix [1.6 kg of CO2] is the same as driving almost 4 miles”.

A year later, The Shift Project revised its estimate down by a factor of eight.

Despite being unable to properly quantify its footprint, it is safe to say that Bitcoin mining is not an environmentally friendly endeavor. It is energy intensive, without a doubt. But a massively overlooked, yet key part of the conversation is what type of energy Bitcoin miners consume.

Meanwhile, the solar and wind energy industry is unable to adequately serve society right now due to a lack of proper infrastructure. These clean power plants generate plenty of energy, but it has to be either used or stored. The issues of intermittency, grid congestion and curtailment make it difficult to use the energy, leading to excess energy waiting to be released to the grid.

As mining bitcoin is location-agnostic, it can monetize this excess green energy that would otherwise go unused. Studies show how this could make more renewable plants profitable by allowing them to monetize excess power. In this way, cryptocurrency mining can become a complementary technology for clean energy production, accelerating the global transition to renewables. 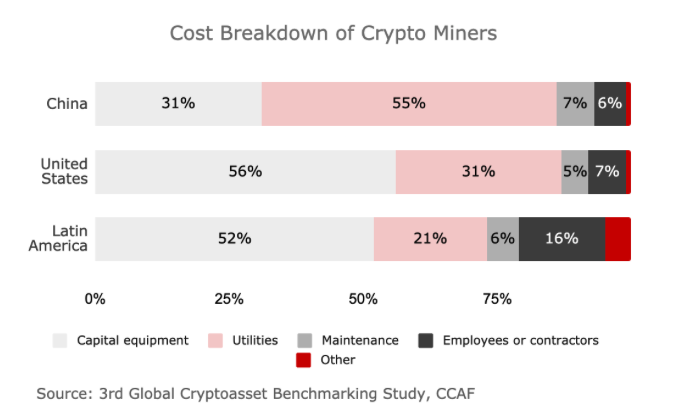 Miners just need an internet connection — their location doesn’t matter — so they can make environmentally-friendly choices more easily than any other energy-intensive business. They can and should go to clean, cheap energy producers in remote areas, since it makes economic sense for them to be energy buyers of last resort.

This view is not new and is gaining both popularity and criticism. A report by Square, Jack Dorsey’s FinTech company, and Cathie Wood’s ARK Invest, shows how Bitcoin mining, combined with solar and wind production and battery storage could be turned into a business model. In the US, clean mining operations already exist, like the HODL Ranch in Texas.

Up until recently, miners have mostly flocked to China, literally moving entire mining operations depending on the weather. China provided cheap hydroelectric power during its rainy season, and low cost coal energy in the dry season thanks to subsidies. But Chinese authorities have now literally pulled the plug on crypto operations, banning transactions and increasing scrutiny on the whole crypto industry, effectively forcing miners to relocate out of the country. 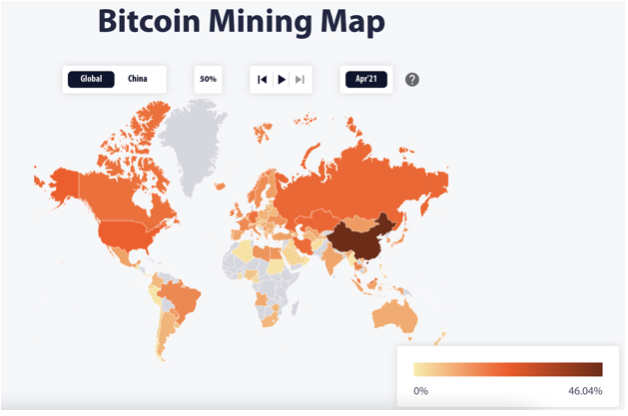 Reports suggest that miners have started to turn to North America, particularly the US, which has become the new Bitcoin mining hub. North and South America could be the new hotspots for green crypto, especially given that the proportion of renewable energy used is the highest according to data from CCAF.

Recent enthusiasm from local officials is helping turn this strategy into reality.

In El Salvador, President Nayib Bukele revealed on Twitter earlier this summer that the country wants to facilitate the energy from its volcanoes for bitcoin mining and “to promote industrial parks where you can set up your factory and you will receive cheap, clean, renewable energy.” In Miami, Mayor Francis Suarez, a crypto advocate, said in an interview that he is working to use its city’s nuclear power capabilities to attract mining facilities.

Canada’s Quebec region is also a hotspot for “green bitcoin” as it has North America’s cheapest electricity as well as cold weather, both of which lower the costs of running a bitcoin mining facility.  Hydro-Quebec, a public utility that manages the generation and distribution of hydroelectric power in the Canadian province, campaigned to sell some of its excess energy to crypto miners and was soon flooded with demand. The company is now allocating a 300 megawatt block of power to miners.

These examples show that there are potential benefits to continued development of Bitcoin as an otherwise very controversial industry. As it turns out, Bitcoin mining is unlikely to be as bad for the environment as has been loudly touted. And beyond that, it has the ability to act a catalyst that propels green energy solutions forward in the future — for crypto mining of all kinds.