The ambitious, bold and hungry start their week with The Business of Business!
Features
7.1.21   6:26 PM Features

Big-name investors have poured $100 million into the platform but some observers are suspicious of its purpose.

BitClout arrived on the Internet in March, and quickly attracted controversy. Its business model is convoluted, origins mysterious and its core function sounds like something ripped from a script for Black Mirror.

Simply put, it’s a social network that allows you to invest in celebrities and influencers — and speculate on their rise or fall in popularity using cryptocurrency. That premise could have been written off as far-fetched or craven, but it won serious backers from Silicon Valley. BitClout quickly racked up $100 million in funding from VC firms like Andreessen Horowitz, Sequoia, Social Capital and Coinbase Ventures. Some of the platform’s most valuable “assets,” from Jake Paul to Alexis Ohanian to Kygo, have also become active users.  Indeed, venture capitalist Marc Andreessen tweeted Thursday: "Just setting up my bitclout."

Despite the votes of confidence, many observers remain suspicious of BitClout. It’s been called a scam, a Ponzi scheme and worse. Here’s what you need to know about the platform and its possible pitfalls.

BitClout is something like what you’d get if you put Robinhood, Twitter and Coinbase in a blender. For logged-in users, it looks like Twitter. A key difference though is that all interactions are operated on a blockchain and every profile has its own distinct “creator coin” whose value fluctuates with ebbs and flows in their popularity. As BitClout explains: “If Elon Musk succeeds in landing the first person on Mars, his coin price should theoretically go up. And if, in contrast, he makes a racial slur during a press conference, his coin price should theoretically go down.” Users’ coin price is listed next to their name on every post and comment.

Anyone can create a profile and receive their own coin, but BitClout also launched with the top 15,000 most popular Twitter profiles pre-loaded. If you thought Robinhood was gamified, take a look at the BitClout leaderboard, on which you can browse a list of profiles of celebrities, influencers and entrepreneurs like a list of stocks and ETFs to invest in. “Buy your favorites and get on their team,” the site invites. 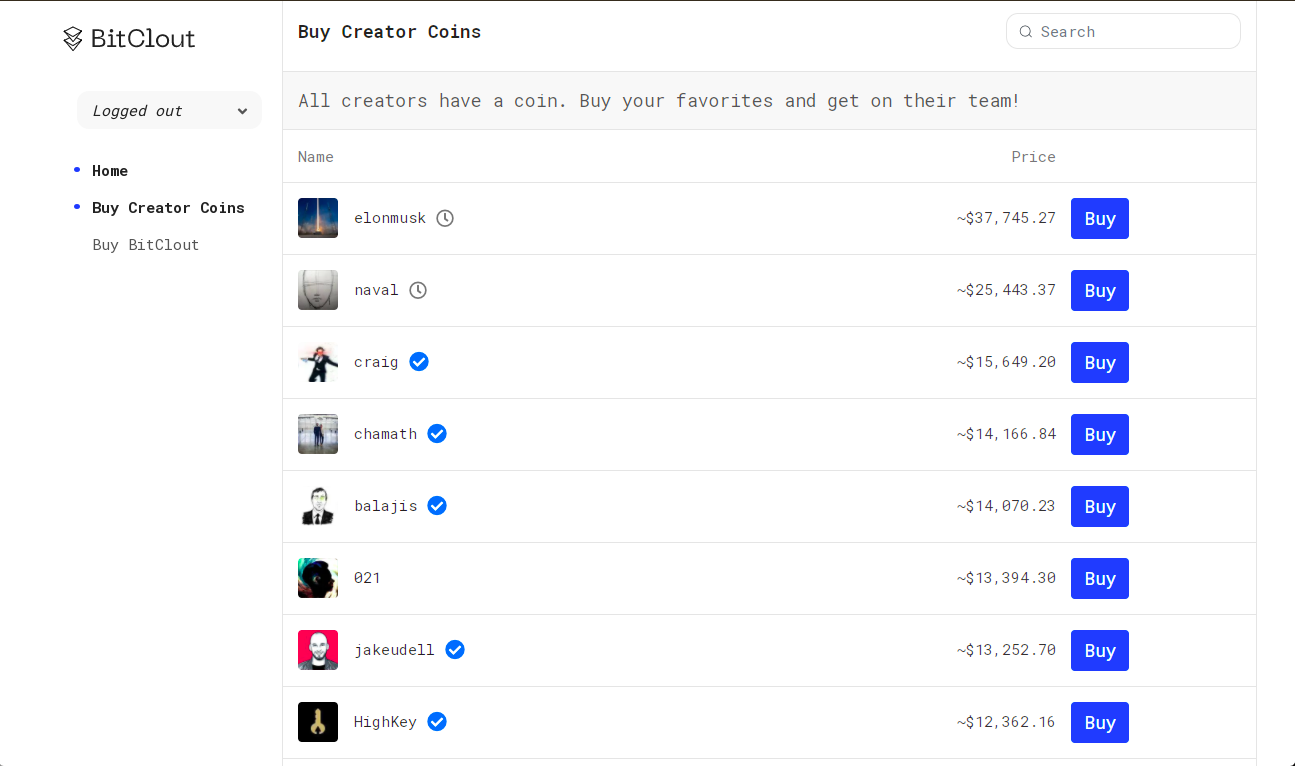 Musk’s coin has been the most valuable since the platform went live. Most of the top 10 are VC and tech influencers (Andy Artz, Chamath Palihapitiya, Balaji Srinivasan, Dharmesh Shah). But you also can grab some of Ariana Grande’s coin for $8,145, Tiktoker Loren Gray’s for $5,737 or Justin Bieber’s for $5,176. Joe Rogan, at $3,113, currently out-prices Joe Biden, if that tells you anything about BitClout’s users.

Much of BitClout’s legitimacy has also come from famous people who are using it. It’s true that handful of celebrities have embraced it, from Pamela Anderson, producer Benny Blanco, author Mark Manson, music mogul Scooter Braun and major tech figures like Coinbase’s Brian Armstrong, Reddit’s Ohanian, TechCrunch’s Michael Arrington and the Winklevoss twins.

But since the 15,000 profiles from Twitter were taken without their owners knowledge, many of BitClout’s most valuable profiles, including Musk’s, have never been logged into. Much of the backlash associated with BitClout stems from claims that it is misleading the public by making it appear that celebrities who have nothing to do with the platform use it. The platform also might be perceived as profiting off of people’s likenesses. However, users who’ve activated their profiles are clearly marked with a blue check by their names while unclaimed pre-made profiles are marked with a clock. In addition, reports suggest those who’ve complained about their profiles are successful in having them removed, albeit in some cases by filing cease and desist lawsuits, like Singaporean Prime Minister Lee Hsien Loong and Silicon Valley developer Brandon Curtis.

The site’s original developers are anonymous and its founder only goes by “Diamondhands” seemingly in an attempt to mimic the pseudonymous founder of bitcoin, Satoshi Nakamoto.  BitClout is “decentralized” claiming to have “no company,” behind it. Instead its open-source blockchain is powered by user-run nodes.

However, It’s been all but confirmed that Diamondhands is Nader Al-Naji, who pitched some of BitClouts’ investors. Al-Naji, a Google alum and 2019 Forbes 30 Under 30 member, is best known for his company Intangible Labs’ failed cryptocurrency Basis. It was a buzzy start-up that raised $133 million in funding before shuttering abruptly in 2018 due to SEC concerns. Al-Naji began, under his real name, posting job listings for a new project last fall, according to New York Magzine. Many of the same investors who backed Basis are now attached to BitClout.

Select test users received a link to make a profile on the beta version in mid-March. At that time, the platform had already received $165 million of bitcoin deposits — initially, bitcoin was the only currency accepted for $CLOUT. The beta version spread quickly, when the app was still working out kinks. According to the New Yorker, “within weeks, users were spending millions of dollars a day on the platform. ”Despite frequent crashes and once, the deletion of hours of transactions, BitClout had $225 million in its bitcoin wallet by mid-April.”

How do people make money on BitClout?

As critics have pointed out, the value of a creators’ coin also has nothing to do with the success of their businesses or growth in their net worth. A coin’s value simply increases when investors buy more of it and decreases when it’s sold. BitClout’s pitch is that if you can get in on the ground level of an artist, influencer or entrepreneur’s rise, there’s money to be made. The way this system is fueled by scandals and public shaming has made some wary of pump and dump schemes. “People are incentivized to cancel people,” one blockchain researcher told CoinDesk. “All you have to do is open a short position and then try to mangle someone’s reputation.”

So far, people don’t seem to be profiting in such sinister ways. One success story going around is that of Canadian high schooler Sigil Wen, who, according to New York Magazine, bought $120 worth of BTCLT in March, invested in his own coins, as well as his friends’. Just from moving around coins in his own circle and investing early in some TikTokers who he helped lure to the platform, his “market cap” hit $600,000.

If you’re famous, there are other paths to profit. Everyone with a pre-made profile has a portion of their own coins set aside for them, so a celebrity can hold their own coin and try to raise their own value. Every user also receives a transaction fee — called a “founder reward” — every time someone buys their coins. If your fee is 10%, that means anytime someone buys their 100 coin, 10 go into your own wallet. The site also includes a tipping function where you earn “diamonds” on posts.

How does cryptocurrency come into play?

BitClout is evidently designed for people already in crypto, given you need two different kinds to use the platform. Creator coins can only be bought with BitClout (BTCLT), the platform’s custom cryptocurrency. BTCLT, in turn, can only be bought with bitcoin. Creator coins aren’t currency themselves — they’re the assets, sort of like NFTs. Essentially, you are selling off your BTCLT every time you buy a creator coin, which contributes to fluctuations in the cryptocurrency’s value.

One of the most controversial claims about the site so far — one the platform says is being addressed — is that there’s no way to withdraw funds or cash out BTCLT. You need to cash to buy bitcoin, bitcoin to buy BitClout, and BitClout to buy creator coins. You can sell your creator coins, but your money is frozen on the site as BTLCT, which isn’t currently accepted by any exchanges. Wen, in order to cash out, had to sell his BitClout to a buyer on Discord at a steep, 40-50 percent discount. Users seem to have accepted this issue as a temporary bug, while others, given the anonymity of its founders, are uneasy about what exactly is going on with the millions of dollars being poured into the site.

Why are people upset about it?

Aside from the anonymous founders, accusations of “stealing” and profiting off of creators likenesses or identities, and the one-way cash flow, some people simply find BitClout and other platforms like it disturbing.

“Monetizing a personality… is fucked,” said a finance Youtuber named Vastava in an explainer video called “The TERRIBLE idea of “Human Stock Markets.’” She continues: “Creator coins are the most explicit version of that I’ve seen, where you suddenly have to guard your reputation not only for clout and your following but also potentially your life savings and our bank account.” She raises the question of “micro-influencers” on BitClout, pouring their money into the platform in an attempt to make it big, wondering “what BitClout is going to look like in a year or two. I hope it looks defunct.”

Is BitClout be the next big thing or will it be a broken url in a year? It’s almost uncanny how many trends it taps into — influencers’ desire for new ways to monetize, the amateur day-trader boom, and the buzz around crypto to name a few. But playing into a trend is different than starting one. BitClout is part of a wave of new of companies, all racing to find the most profitable way to use crypto and NFTs in order to turn social capital into cash. Other examples include Roll, which assigns users branded tokens nicknamed “social money” that uses the Ethereum Blockchain, and Rally, which allows creators to start their own digital currency used an independent economy with fans. Presumably, whoever can give influencers the best bottom line will win out.

Correction: A previous version of this story misstated the amount of money the platform has raised from venture capital firms. The correct amount is $100 million.