There’s a weird interplay between Clubhouse, Twitter and legacy journalism, and I fell right in the middle of it.

Before December 20, 2020, I had never heard of Clubhouse, the invite-only voice-based social media app which sprang up during the pandemic. But on that day, I became the Internet’s main character, when ELLE magazine published a story about my relationship with now-incarcerated drug company founder Martin Shkreli.

The viral story touched off a torrent of snarky tweets, searing think pieces, and in a new wrinkle to the media cycle, a discussion on Clubhouse. A more tech-savvy contact of mine clued me into the chat, and gave me an invite to the app. Suddenly, I was on “the stage,” fielding questions about the aroma of chicken wings in the prison visiting room, my white privilege, and (from angel investor Jason Calacanis) about what it was like to kiss Shkreli after knowing him for years in my past job as a Bloomberg reporter.

Days later, Vulture likened my appearance to that of Chet Hanks, rapper son of Tom, who used the app to defend himself amid outcry over his adoption of Jamaican patois. The publication referred to us in the same breath as media figures “of mild infamy.”

As the experience unfolded, I observed the blossoming of an intriguing feedback loop: The initial tweet storm gave rise to the Clubhouse chatter, which inspired further tweets, which drew engagement from legacy media. Then eventually more of my journalist acquaintances showed up in Clubhouse.

A spokeswoman for Clubhouse, Jane Rubin Sharp, declined to comment when I asked whether media controversy factors into the company’s growth strategy. But that dynamic has undoubtedly played a role.

Launched in the spring of 2020 as a platform where Silicon Valley insiders could socialize in COVID times, Clubhouse has exploded from just 1,500 users in May 2020 to 10 million weekly active users in February 2021, according to SEO strategy firm Backlinko, which gathered that data from various sources. Downloads picked up significantly starting in December, and accelerated through January and February, Backlinko reported, citing Fortune and Appfigures. 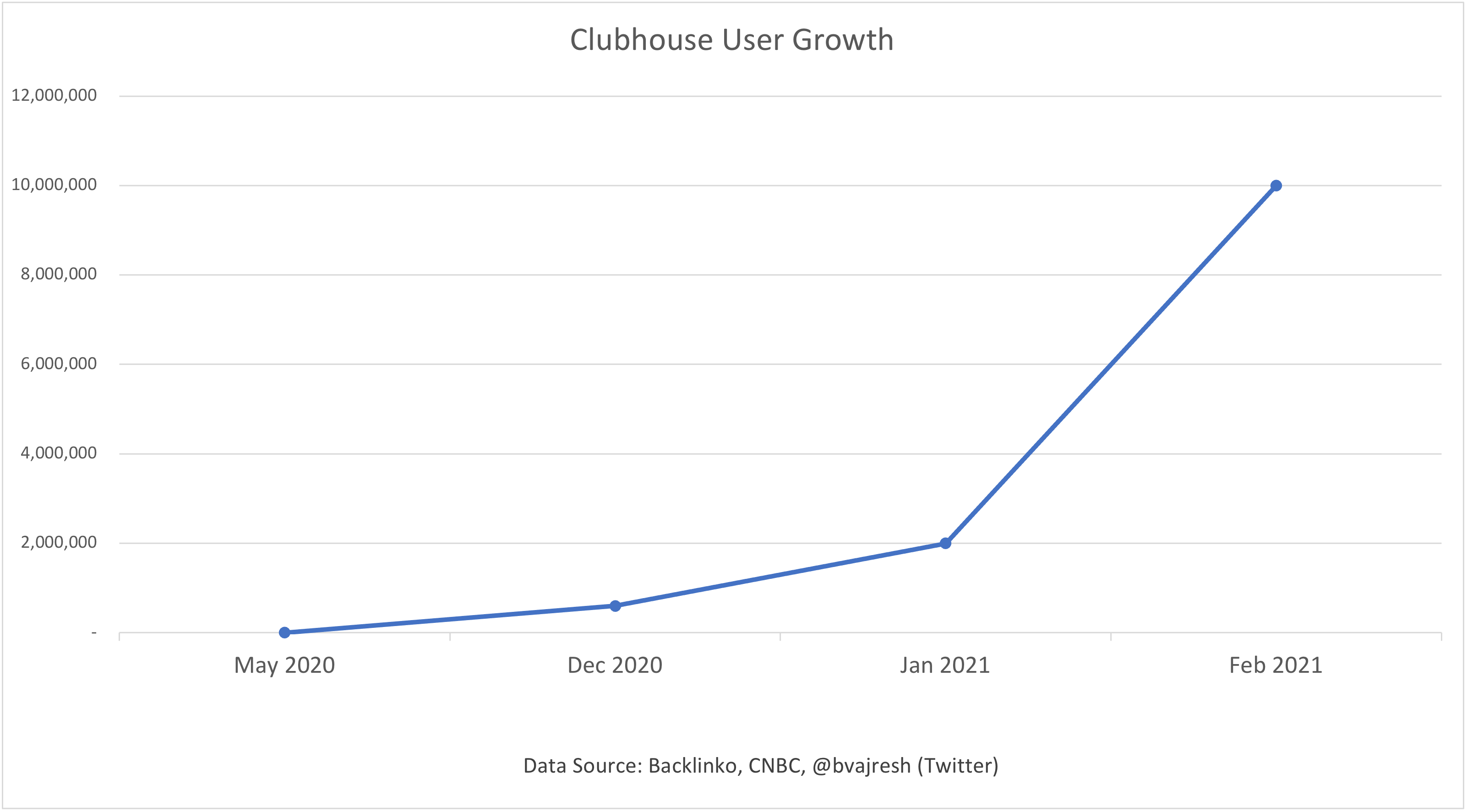 The app achieved unicorn status with a $1 billion valuation in January. An unrelated but similarly named content marketing company called Clubhouse Media, which went recently went public through a reverse merger, has enjoyed a huge bump in its stock price apparently because investors confused it with the voice chat platform.

Rapid growth for Clubhouse has occurred despite the app remaining in “private beta mode,” meaning you can only join if an existing user gives you an invite. (It also currently only works on iOS and not on Android phones.) But then again, the “invite-only” feature could also be helping to fuel the growth, offering a lure of exclusivity mingled with FOMO.

Weeks after my weird Clubhouse baptism, the app played host to a blockbuster discussion with Elon Musk, which stirred so much excitement that it spurred a day’s worth of pre-event discussions and post-show recaps by technology boosters and influencers, including at least one room that apparently offered a cash giveaway from Square.  A writer for The Verge compared the tsunami of social media participation to South by Southwest festival-goers flooding Austin streets in 2015 while broadcasting themselves on Meerkat.

In the past two months, Facebook CEO Mark Zuckerberg has also made an appearance on the app, as has Robinhood CEO Vlad Tenev to discuss the GameStop fiasco, and Bill Gates, who was interviewed on the platform by CNBC “Squawk Box” co-host Andrew Ross Sorkin. Over that time, the app’s user base has soared.

The blend of tech industry titans, celebrities, and members of the public all chatting together over their iPhones from the comfort of their homes, with reporters listening in, has also spawned its own public skirmishes. In February, a New York Times reporter sparked backlash by tweeting that entrepreneur and Clubhouse backer Marc Andreessen had used the “r-slur” while speaking on the app. The reporter later deleted the tweet after learning it wasn't Andreessen, but another person on the chat who had used the word.

The Times later published a story profiling the platform, advertising it under a tweet that said “unfettered conversations are taking place on Clubhouse, an invitation-only app that lets people gather in audio chatrooms. The app has exploded in popularity, despite grappling with concerns over harassment, misinformation and privacy.”

In replies, Twitter users soundly mocked the media company’s choice of words and implication that voice chats should be more closely monitored.

“Oh my God, someone better get in there and fetter those conversations! Won’t somebody PLEASE think of the children!” One user tweeted sarcastically.

Another replied: “I occasionally have unfettered conversation at parties, even in my house. Should I be concerned?”

It remains to be seen whether voice chat will become as broadly appealing, as say, Facebook, with roughly 2.8 billion users worldwide, or even Twitter, which has a measly 187 million. We can’t be sure if interest in audio-based social media, which can seem like an endless conference call, will continue after the pandemic, or frankly, even when the weather is nice enough not to want to sit inside chatting on your phone.

There is much hope among investors, entrepreneurs and big tech firms that it will. Twitter launched Clubhouse competitor Spaces in January, and it’s now in beta for users of both iOS and Android devices. The company is expected to make Spaces publicly available, removing the invite-only requirement, in April. There is one growth-driving feature which Clubhouse has, though, that Spaces so far lacks: controversy.