The ambitious, bold and hungry start their week with The Business of Business!
People
9.13.18   10:42 PM People

As Hurricane Florence makes landfall, we look at hotels and grocery stores in the Carolinas that could be affected by the strong Category 2 storm.

Hurricane Florence is expected to make landfall on the Carolinas as a strong Category 2 hurricane, and is projected to hover over the two states until Saturday.

Along with impacting millions of lives, Florence will also cause some sort of effect on local businesses who will either have to deal with destruction from the storm or have increased business before, during, and after the hurricane. Two major businesses that are bound to be affected are hotels and grocery stores, which both play an important role in supplying residents with shelter and food before, during, and after natural disasters such as this.

About 6.5% of all Choice Hotels locations and 3.8% of all Wyndham Worldwide hotels (including La Quintas) are in the Carolinas. In other words, more than 1 of 20 hotels in the Choice Hotel brand would theoretically see some sort of impact in the state, while Wyndham won't be as affected by the storm as much. 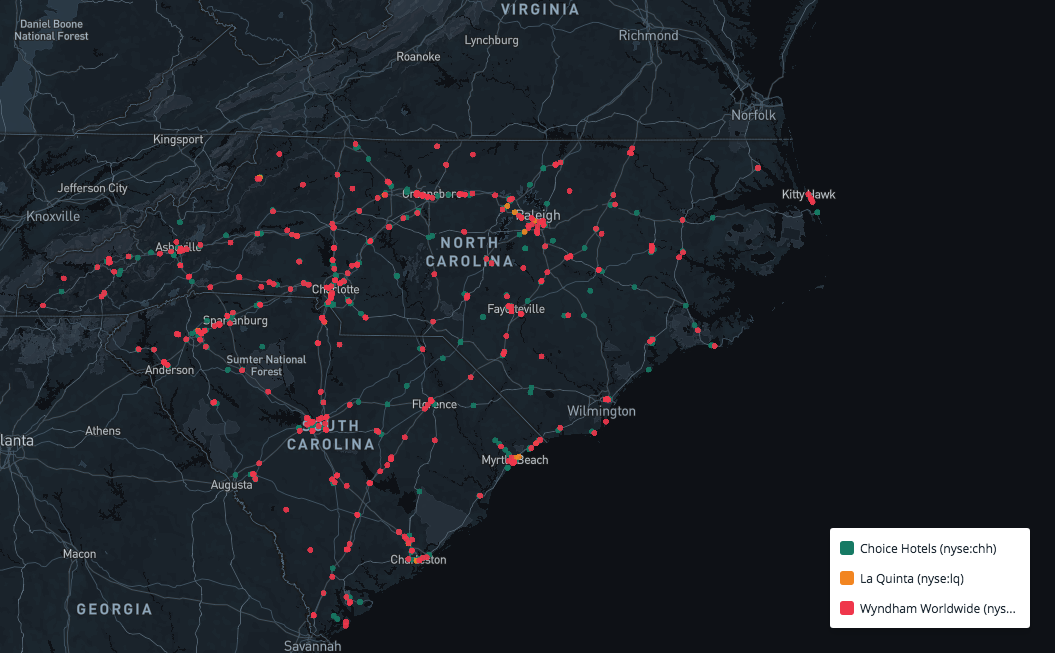 The majority of their locations are scattered inland towards Charlotte, Columbia and low-lying Raleigh-Durham. Myrtle Beach, one of the most notable beaches in South Carolina that will see the brunt of Florence, ranks sixth among all cities for number of Wyndham and Choice Hotels.

Logically, hotels on the coast will have to board up and see some destruction due to hurricane force winds and potential flooding, while residents fleeing inland will consider staying at hotels for safety and for temporary residency. This is especially true for those who must take care of pets during the storm, who will want to stay at specific Choice and Wyndham hotels among others in order to keep their faithful companion(s) safe.

Local, national grocers at a glance

Before a hurricane, some residents stock up on necessary foodstuffs that will last them through the storm. After it, those who lost electricity or had their houses flooded will have to go out and replace what spoiled or ruined in their refrigerators and pantries.

In the Carolinas, some of the most popular grocery stores include major chains Walmart ($WMT) and discount grocer ALDI ($PRIVATE:PRIV_ALDI), as well as local favorites in Publix ($OTC:PUSH) and Food Lion, a subsidiary of the massive food retail company Ahold Delhaize ($DEG). In our database, there are over 600 Food Lions tracked in the Carolinas, more than all the Walmarts, Publix, and ALDIs combined.

Much like the hotel chains, these grocers are distributed across the state at its most populated areas, with a few major outliers in barrier island towns, such as Avon and Kitty Hawk along the Outer Banks.

On the surface, it seems that Food Lion would be most affected by Florence, but in terms of affected store percentage, it's Publix that will most likely feel the greatest effects of the storm.

With 8% of stores in the Carolinas compared to ALDI's 5.8% and Walmart's 5.9%, a large chunk of its sales will be affected in some form by the Category 2 storm. And while the majority of Food Lion's stores (58.8%) are in the Carolinas, it is still part of the Ahold Delhaize network that has thousands of grocery stores, such as Stop & Shops and Giant Foods, across the nation.

Still, all four stores have a massive presence in North and South Carolina. Whether Florence will have a negative impact (ruining produce and other food via outages and floods) or positive (increased customers before and after) is yet to be determined, but as it stands, it will definitely affect the overall portfolio of those major supermarket players.