HQ Trivia: Once the darling of apps, now a bit of a disaster (data inside)

As HQ Trivia enters its second year of programming, internal and external issues with the app and its publisher, Intermedia Labs, show that it could be running out of time to answer the question of its relevancy.

On New Year's Eve last year, an app called HQ Trivia ($PRIVATE:HQTRIVIA) became available on Android smartphones after several months on iOS. Over the next few weeks, the live interactive trivia game show with real cash prizes became a viral sensation, partnering with brands such as Nike ($NKE) and turning its primary host, Scott Rogowsky, into a rags-to-riches success story with a cult-like following.

But as HQ Trivia enters its second year of programming, internal and external issues with the app and its publisher, Intermedia Labs, show that it could be running out of time to answer the question of its relevancy.

Over the past few months, the number of reviews given to HQ Trivia on the App Store has tapered off, indicating a potential decrease in new users.

While people are no longer reviewing the app as much as they did, the app itself is being downloaded less. Among free iPhone games, HQ Trivia is far out of the top-10 — a place where it comfortably sat during the height of its popularity — and is now fluctuating between the top-250 and top-500.

On a micro level, users are growing increasingly skeptical of the game, especially as bots continue to pop up and undermine enjoyment (and potential winnings) for players. In theory, a person can put hundreds of bots in a game and cash out with a larger share of the prize pool after multiple bots win the game. This dilutes the overall prize pot for legitimate winners, or decreases the money they cash out with. 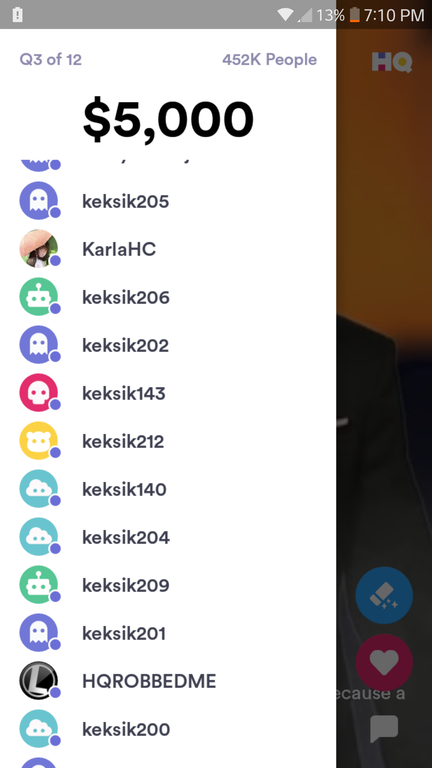 This decline comes at a time while internal strife among company executives is happening, according to Recode. In their report, the tech news website details how Intermedia Labs CEO and co-founder Rus Yusupov was forced out of his post and replaced with Colin Kroll, the other co-founder. Furthermore, HQ employees reportedly filed an HR complaint for Kroll's aggressive management style, and while it wasn't deemed to be sexual, this concern was allegedly elevated to the company's board of directors.

Kroll previously worked at Twitter, where he was fired for being a "bad manager," and at Vine, where he allegedly had a reputation for being "creepy" towards women.

As Intermedia Labs is preparing to launch its second game show — the Wheel of Fortune-like "HQ Words" — it faces plenty of questions about its original viral hit app and its overall business. Intermedia is hoping that HQ Words is its extra life among its users, or else the young startup may run out of time to answer the question of its staying power.