The ambitious, bold and hungry start their week with The Business of Business!
People
2.21.18   2:02 PM People

How to get away from it all (using data!)

First-world problems: How far are YOU from your nearest Starbucks, Walmart, or Tesla charger?

Recently, a team of researchers at Oxford University's Malaria Atlas Project used the power of data to put together an impressive project: Calculating how far any dot on the map is from big city health services, anywhere in the world.

They published their results in last month's Nature magazine, and they've got a gorgeous interactive map available online for all of us to explore (courtesy of RoadlessForest.EU).

To be fair, if you've ever headed out on the backroads of this great country, you're aware that travel times can vary wildely even in the developed world. While you might be able to cover 100 miles in an hour or so barreling along Interstate 90 through Montana, once you head a few miles further north it can take you 10 hours to cover the same distance over dirt and gravel roads.

That said, we thought we'd explore some similar calculations using our data. We don't go quite as far as the Oxford scholars, who had solid medical-support reasons for calculating how far one could travel in an hour over every possible surface, from four-lane highways to donkey paths and mountain trails. We used the simple expedient of drawing a circle 100 miles wide around our data points.

Where can you go to get away from Pumpkin Spice Latte?

In a big city like New York or even Salt Lake, it might seem like there's a Starbucks ($SBUX) on every corner. But once you get further afield... there's still a ton of places to refuel on caffeinated beverages.

Here's a map of every Starbucks in the land, with each cafe at the center of a 100-mile circle. As you can see, there are just a few spots left that are farther than 100 miles from the nearest barrista. 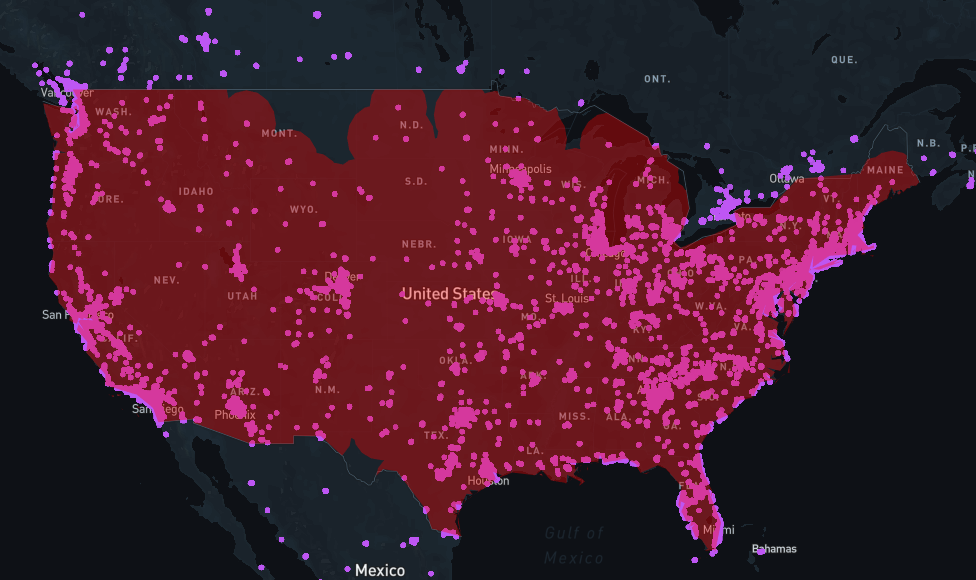 The far Northern tip of Maine, the desert wilds of Big Bend Park in Texas, the Badlands of North Dakota, a few slivers of shorline on Lake Superior, and... a gigantic chunk of Montana. There's a reason they call it the Big Sky Country, not the Vente Sky Country.

For you, no charge!

For another measure, we took a look at Tesla's ($TSLA) national charger network. We'd heard they have pretty good coverage - but how good? The map will reveal all: 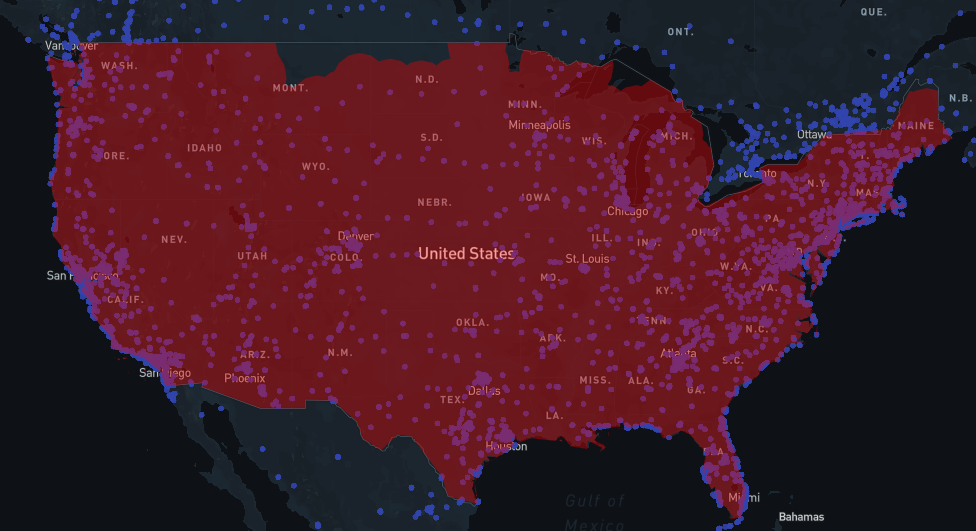 Very impressive! They have even better coverage than starbucks in Northern Maine, just a sliver of Lake Superior shoreline near Copper Harbor, and marginally better presences across Montana and North Dakota.

Their only gap is the Red Lake region of far-Northern Minnesota. Well done, Elon!

But for the greatest coverage, you've got to hand it to Walmart ($WMT). 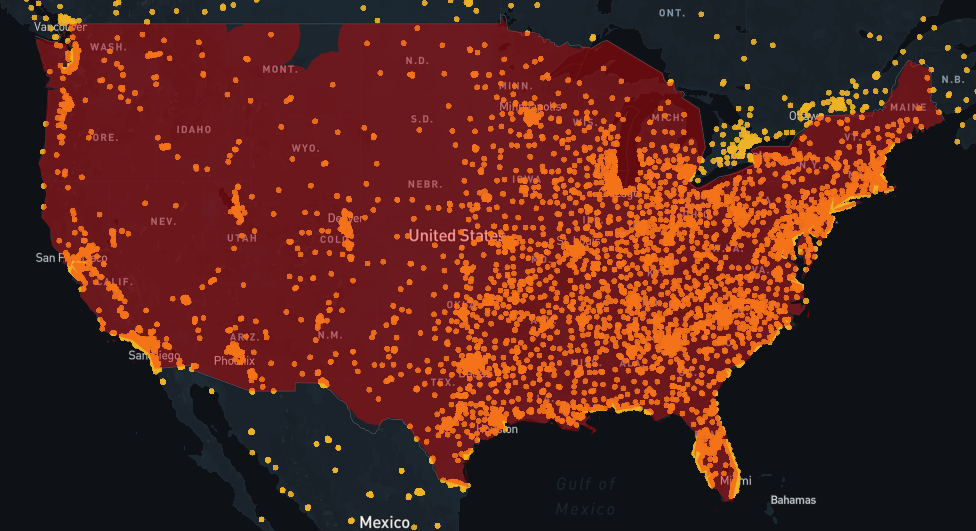 Total and complete domination - with the miniscule exception of the far, far reaches of Montana and the desolation of the Rio Grande Valley.

Of course, there are store closures on the horizon, so this map will be outdated soon. But considering the vast sprawl of the Walmart empire, that's not too surprising - some of these stores can't possibly be making money in their far-flung outposts (and sadly, once they close, there won't be any other option for some of these towns). No wonder their stock is getting whalloped.

Data journalist Andrew Van Dam took this concept one step further, and came to almost the exact same conclusion we did:

Armed with this data, and hours and hours of computer time, The Washington Post processed every pixel and every populated place in the contiguous United States to find the one that best represents the “middle of nowhere.” 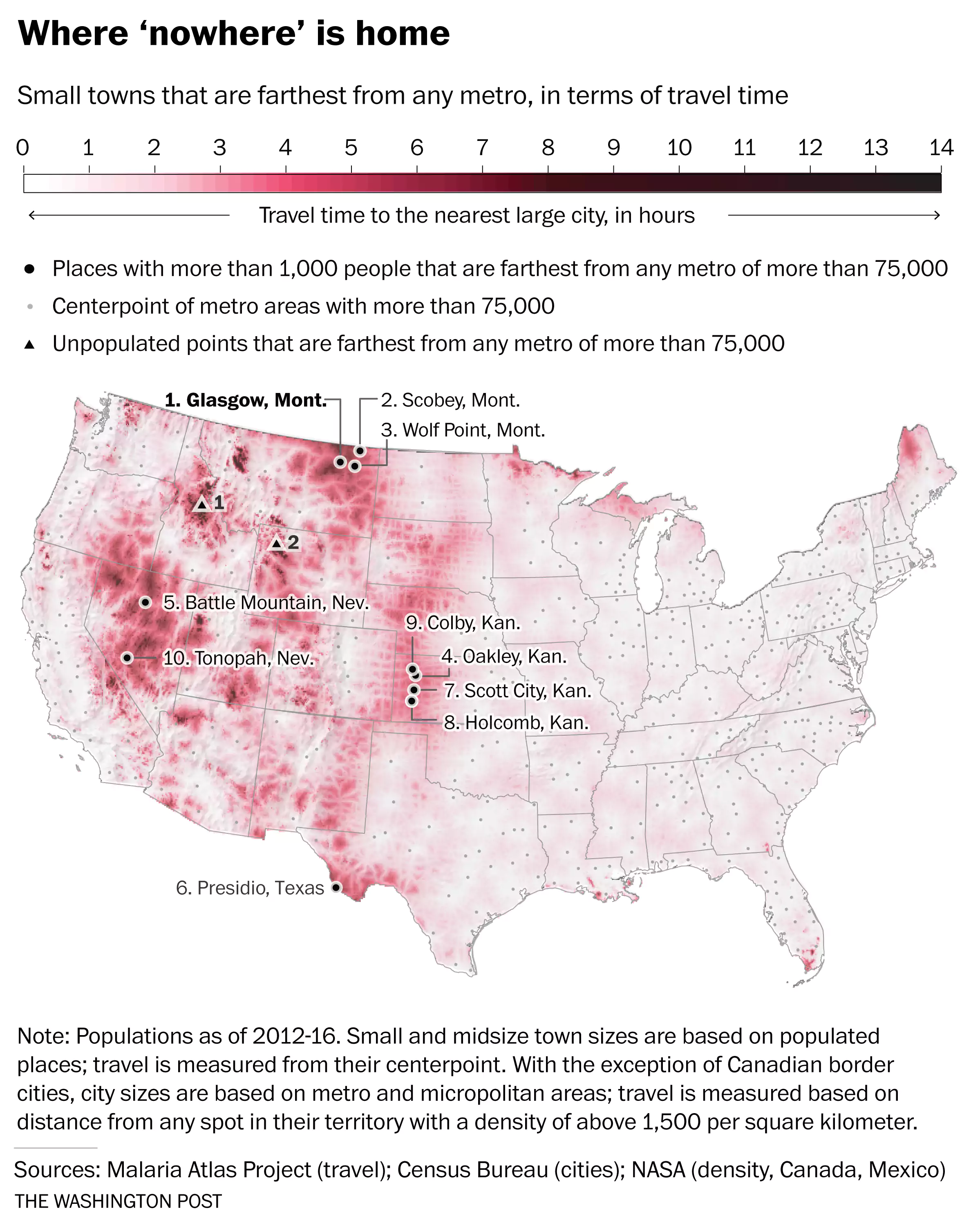