The ambitious, bold and hungry start their week with The Business of Business!
Features
1.7.22   9:05 PM Features

On the eve of the Indian company’s IPO filing, CEO Kunal Bahl revealed his story of landing funding as an eager 20-something from ex-Microsoft executive Kenneth Glass.

It’s a struggle for almost any founder to land early-stage investment, especially for one in his early 20s who is trying to launch a company thousands of miles away from venture capital hubs like Silicon Valley.

But Snapdeal CEO Kunal Bahl secured his first angel investor more easily than most — thanks to some spunk on his part as well as “kindness and serendipity.”

Snapdeal, a New Delhi-based e-commerce platform that has raised $1.7 billion from the likes of SoftBank and Intel Capital, filed for an IPO in India last month. On the same day, Bahl revealed his story about winning over his first investor, former Microsoft executive Kenneth Glass, in a gratitude-filled tweet thread.

“Thank you Ken @ken_glass!” Bahl posted. “We wouldn’t have come this far if it wasn’t for your belief, your generosity, your kindness and your affection over the last 15 years.”

His effusiveness is perhaps unsurprising, given that many founders find that getting their first investment is a grind at best. According to the Center for Venture Research at the University of New Hampshire, angel investors agreed to fund fewer than a third of new business opportunities that they came across in 2019 and 2020.

In India, the effort is even more challenging. Although growing rapidly, India’s venture capital space still lags far behind the U.S. in terms of amount of funding and deals done. When Bahl was working on building Snapdeal in 2007, “there was no angel investor ecosystem in India,” he tweeted.

In his thread, Bahl detailed how he struck up a friendship with Glass, who ended up being just the savior Snapdeal needed. The company was launched in 2010 by Bahl and co-founder Rohit Bansal.

The story began when Glass appeared as a guest speaker when Bahl was studying business at the University of Pennsylvania’s Wharton School. An epiphany hit him during Glass’s lecture: He wanted to become an entrepreneur.

“One question he asked in the class which got everyone guessing. ‘What does the entrepreneur need the most to succeed?’” Bahl tweeted.

“The right answer was..Passion,” he added. “I left the class completely and absolutely inspired.”

Upon graduation, Bahl started off his career at Microsoft. Being an international student, it was much easier to stay in the U.S. by having a job. (Getting a visa while trying to launch a startup is a dicey proposition at best.)

Knowing that Glass was previously a Microsoft executive and lived around the company’s Seattle headquarters, Bahl sent him a cold email, not expecting a response. To his surprise, Glass replied 30 minutes later with an invitation for lunch at the Malay Satay Hut (a Malaysian restaurant) near the Microsoft campus. It ended up being just their first of many meals together. 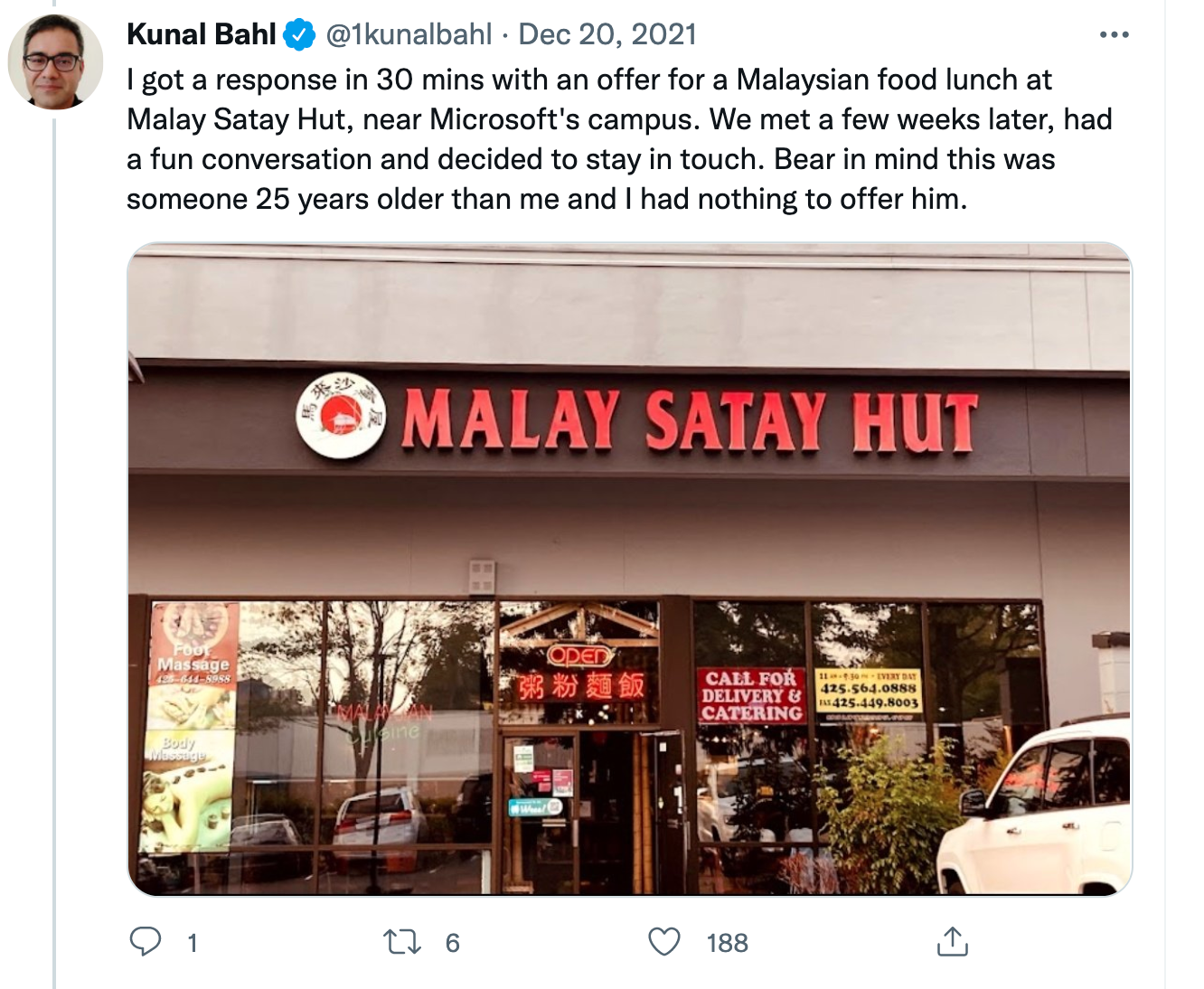 One day, when Bahl told his friend he was interested in founding a startup, Glass smiled and replied: “Let me know if I can help in any way in your journey.”

A few years later, Bahl got rejected when he applied for a U.S. work visa and was forced to go back to india. He decided to found Snapdeal, a coupon book business, with his friend Bansal. Little did he know the company would eventually become a unicorn and a leader in the Indian e-commerce industry.

But in the early days, there were no investors eager to sink money into Snapdeal. The company, which sold coupon books, was scraping around for cash to provide as an advance to the printing press. Bahl said he and Bansal had already exhausted their savings.

“Suddenly that conversation in the Malay Satay Hut parking lot flashed in front of my eyes,” Bahl tweeted.

He emailed Glass and set up a call. On the phone, he explained to Glass what he was doing and why he needed to place an order for the printer, and asked how he might go about seeking capital.

“I finished & don’t think a second passed that I heard back from the other end of the line. ‘I want to support you. I will invest,’” Bahl tweeted, recalling Glass’s words. “A long pause on my end. Not only because I was surprised. But also I couldn’t talk while I had an ear to ear smile on my face and tears in my eyes.”

Bahl’s friendship and business relationship with Glass only grew from that moment. Glass even attended Bahl’s wedding in India five years later (Bahl tweeted a picture).

Addressing Glass, Bahl tweeted: “May you continue to inspire many others to be magnanimous, true angles to those who want to change the world with their *passion.* Blessings of everyone ever associated with @snapdeal will forever be with you.” 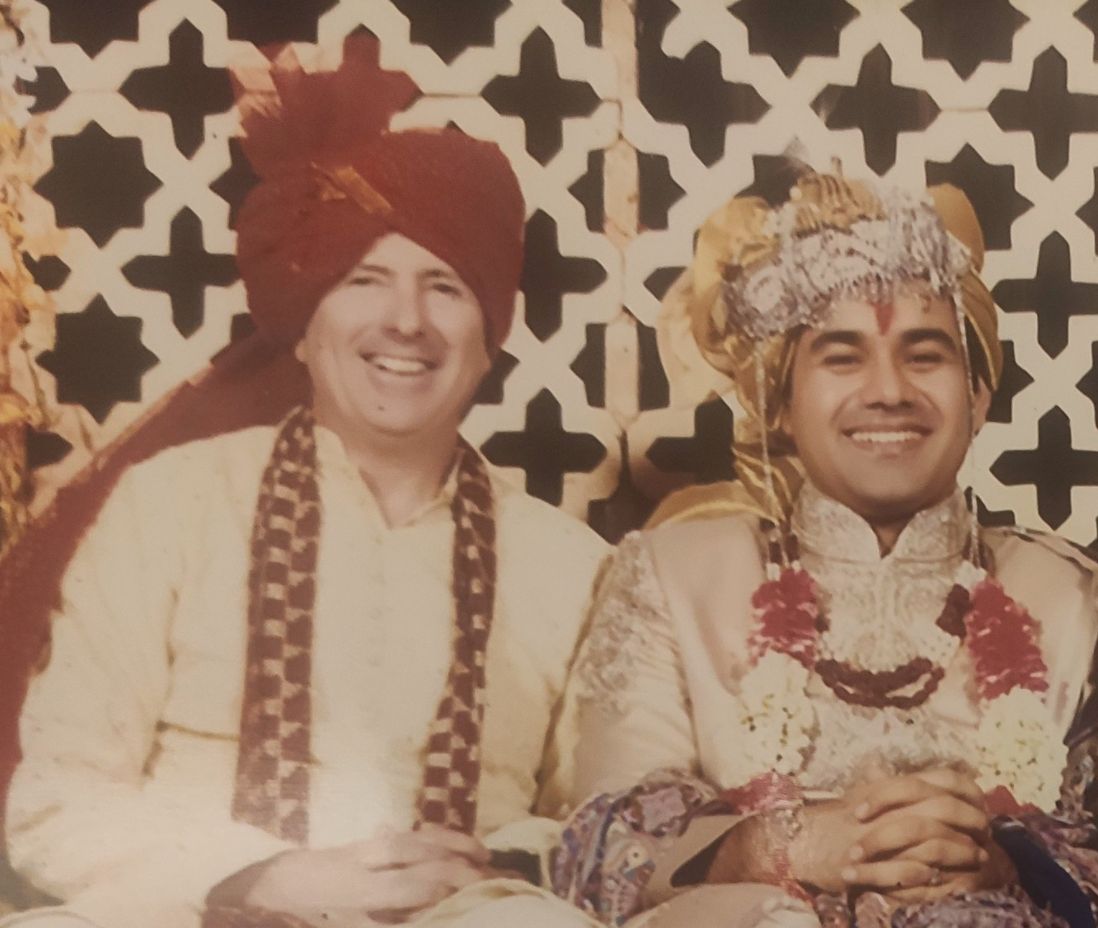