The ambitious, bold and hungry start their week with The Business of Business!
Markets
2.4.22   9:32 PM Markets

Special purpose acquisition companies were a method of choice over the past year for taking companies public. But now a downturn in the market is making them less attractive.

The SPAC golden age might finally be coming to an end. Special purpose acquisition companies, or blank check companies, became a method of choice over the past two years for taking new businesses public, raising a record $160 billion in 2021.

But now that the Federal Reserve’s interest rate-hike plans are splashing cold water over a formerly blistering-hot stock market, the appeal of SPACs is starting to wane as the values of portfolios drop.

CNBC’s proprietary index of SPACs that have completed mergers fell 23% in January, resulting in losses worth billions of dollars. At least three SPACs had to drop plans to launch IPOs last month over concerns about market volatility, according to MarketWatch.

The biggest-name SPAC sponsors, such as venture capitalist Chamath Palihapitiya, activist investor Bill Ackman and real estate mogul Sam Zell, all felt some amount of impact from the market rout. But some fared worse than others.

Here’s a look at the portfolios of 11 of the most famed SPAC dealmakers and how much of a beating their holdings took in January. 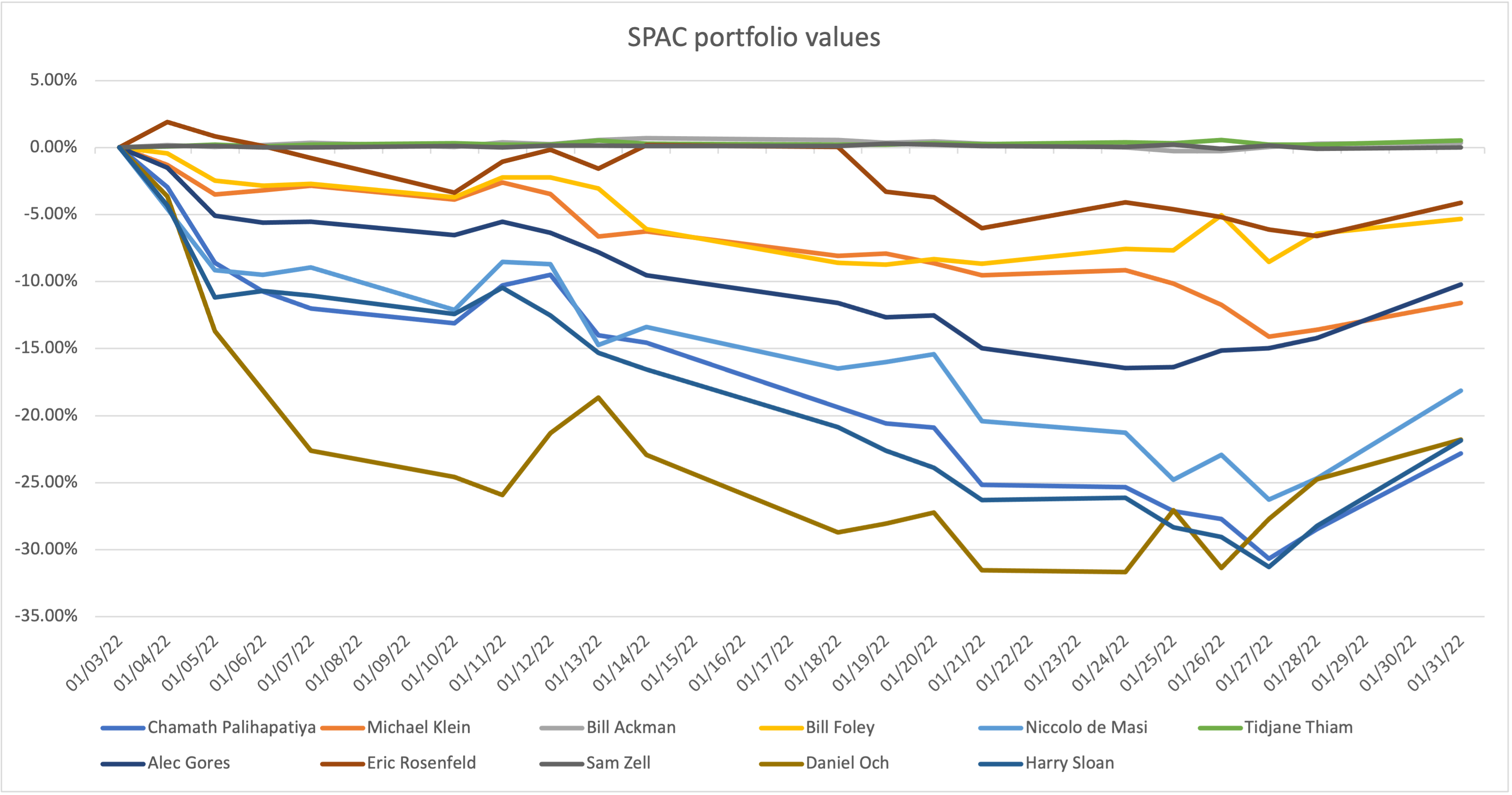 Sometimes called the “King of SPACs,” Chamath Palihapitiya is the chairman and CEO of venture capital firm Social Capital and a former Facebook executive. To date, he has sponsored 14 SPACs. In the month of January, Palihapatiya’s SPAC portfolio plunged in value by 23%.

Harry Sloan is the former chairman of media company Metro-Goldwyn-Mayer, a producer of movies and television programs. He is now the CEO of investment firm Eagle Equity Partners which has sponsored 8 SPACs to date. Sloan’s SPACs lost 22% in value in January.

Daniel Och is the founder and chairman of publicly-traded hedge fund Sculptor (formerly Och-Ziff) Capital Management. He has sponsored only one SPAC, which plunged in value by 22%.

Niccolo de Masi is the CEO of dMY Technology, a company dedicated to listing SPACs in the public markets and merging them with private companies in the mobile landscape. De Masi’s SPAC portfolio value decreased by 18% in January.

Michael Klein is a former Citigroup banker  and a long-revered  dealmaker on Wall Street. His SPAC portfolio plummeted by 12% in the month of January.

Alec Gores is the CEO of private equity firm The Gores Group. He is “the man with more SPACs than anyone,” according to The Wall Street Journal. Gores’ portfolio value has been reduced by 10% in January.

Bill Foley is the chairman of insurance firm Fidelity National Financial, a provider of title insurance to the real estate industry. In January his SPAC portfolio slumped by 5%.

Eric Rosenfeld is the CEO of New York-based investment firm Crescendo Partners. He is known for being an activist investor in the companies he invests in. So far, he has sponsored 6 SPACs with his firm. By the end of January, Rosenfeld’s SPAC portfolio was down by 4%.

Sam Zell is the founder and chairman of private investment firm Equity Group Investments. His SPAC portfolio consists of just one company, whose stock barely moved in January.

Bill Ackman is the CEO of Pershing Square Capital Management. As of Wednesday, his firm is a top-20 shareholder in the streaming giant Netflix. Ackman’s SPAC portfolio, which includes only 1 SPAC, Pershing Square Tontine Holdings (PSTH), ended the month of January with a 0.35% gain.

Tidjane Thiam is the former CEO of Credit Suisse. His SPAC, Freedom Acquisition Corporation is focused on merging with a private company in financial technology. Thiam’s SPAC portfolio was flat in January, ending the month with a 0.54% gain.