The ambitious, bold and hungry start their week with The Business of Business!
People
6.11.19   7:32 PM People

Just how much is Unilever invested into its "growth star" countries? We dive into its job openings data to find out.

Unilever ($UN) Chief Executive Officer Alan Jope piqued the interest of international business development folk when he called Vietnam, Bangladesh, Pakistan, Ethiopia, and Myanmar the top "growth stars" for consumer goods at the Deutsche Bank Global Consumer Conference today. With how much these countries have grown GDP wise, “These are going to be very important for the future and we are investing heavily,” he said.

But is Jope — and Unilever in general — practicing what they preach? In identifying these countries as growth markets, we're able to see its job listings on its official website to see if its is bringing on a steady stream of human capital to further plant its roots within these communities.

And, as data shows, some countries appear to be bigger "growth stars" than others.

Majority of "growth stars" haven't had hires in months

Bangladesh, Ethiopia, and Pakistan have all not seen job openings within Unilever's company website in several months, according to data tracked at the company's careers page.

In Bangladesh, Unilever was last looking for a Finance Business Partner - Customer Development in Dhaka, and before that, a COO for its operations there.

Ethiopia had a few Unilever positions open in its capital of Addis Abba. Recently, there was a Manufacturing Excellence Coordinator open, but it was taken down — which is assumed to now be filled —after April 5.

A slow trickle of jobs in Myanmar

One out of the five countries that Jope listed is where Unilever is hiring... Slowly.

Myanmar — officially the Republic of the Union of Myanmar and also known as Burma — has one job open currently if one were to want to work at Unilever, and it is for a "Media Activation Manager."

This role appears to be in Marketing and Public Relations for Unilever, as the company is searching for someone to, among other responsibilities, "leading the full funnel media agenda (awareness, engagement and conversion)" in the country. 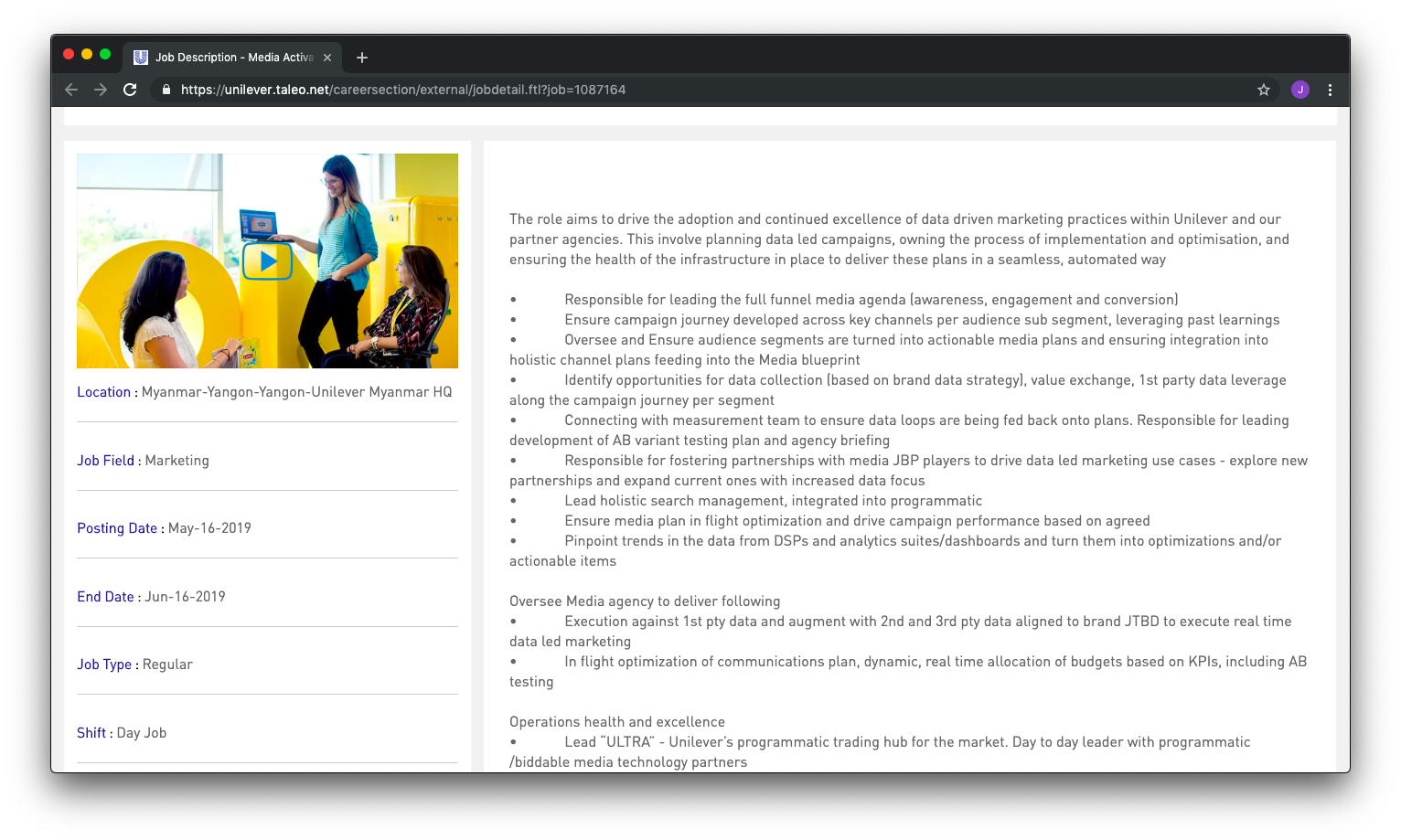 Vietnam runs away with the most job activity

While the role in Myanmar is certainly interesting, Vietnam is seeing the most active and frequent job postings out of the five countries Jope talked about in his talk at the Global Consumer Conference.

In Vietnam, Unilever has a Digital Analyst role currently open for its Marketing division, but also had a mini hiring-surge in April. These roles also appeared to be in marketing and across a few different avenues for potential sales of Unilever products.

Are Unilever's job opening numbers in these five countries as great as places such as the United States, the Netherlands, or the United Kingdom? Absolutely not, but to see the company stay true to its word — to varying degrees — is definitely interesting. The closed job openings over time does indicate that the company is looking for people across all five of its "growth star" countries, but specifically in Vietnam in Myanmar, it appears that Unilever is putting a bit of emphasis on marketing for one reason or another.