The ambitious, bold and hungry start their week with The Business of Business!
People
3.5.18   5:10 PM People

How big is the Oscar bump? The shape of the data

Sure, "It is an honor merely to be nominated". But there's actually a lot more lucre than honor on the line.

When Guillermo Del Toro accepted the Academy Award for Best Motion Picture for "The Shape of Water", he was probably way too excited to be thinking about such mundane things as the bump his film was going to get in ticket sales. But for the studio executives in the audience who had financed his quirky hit (at some risk to themselves), "How much will tonight's Best Picture trophy pay off?" was very much on their minds.

There's mixed data on how much impact an Oscar nomination (or 7) can have on a film's box-office take. For starters, while disappointed also-rans may salve their wounded feelings with the old saw "It is an honor merely to be nominated", there's actually a lot more lucre than honor on the line.

Business Insider reported an instant surge for the nominees, based on data from ticket sales site Fandango. Based on the 241% jump for "The Shape of Water," you might have predicted it would take the top spot: 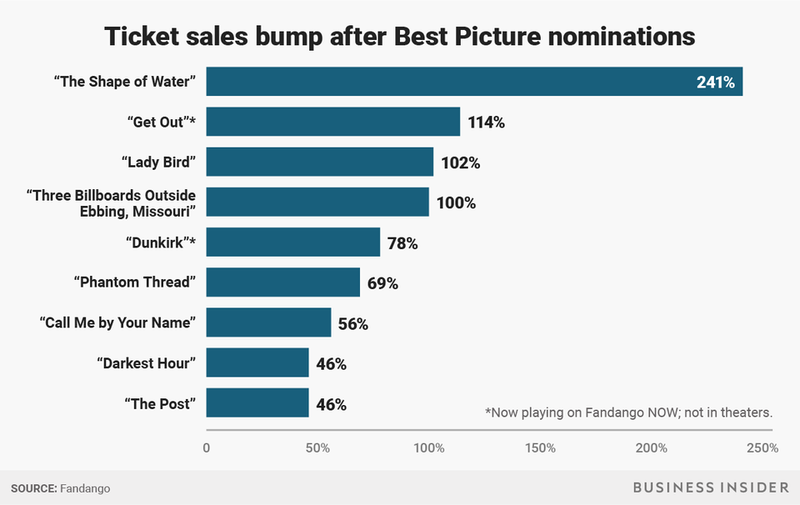 Timing is everything. January is generally a dead time at the box office - it's hard for anyone to remember a January or February film by the time nomination season rolls around almost a year later, so studios launch their most Oscar-worthy films in December. That way the buzz is fresh in people's minds as they decide which films to nominate, and even more important, the films are still in wide release when the nominees are announced. "Get Out" was released in February of last year, it's already available in streaming and DVD, so very few people went and saw it in a theater, even though they brought it back to 468 screens. Likewise with Dunkirk.

You can see this a bit in the overall theater trends. For example, AMC allows checkins via Facebook app, which we track at Thinknum. There's a whole lot of noise in this data, but one thing we know for sure: After the holiday lull, ticket sales started ticking up in the lead-up to the Academy Awards.

Taking the aggregate data from BoxOfficeMojo.com, we can see a huge percentage of the nominees' take comes in after the nominations - even for films that have been in release for weeks:

We'll come back in a couple of weeks and do a follow up to see if the winners get even more of a boost. But last year's surprise winner, Moonlight, got a full 20% bump after it's surpise win (again, figures from BoxOfficeMojo.com):