How big is Amazon? A look at the mind-bending numbers

We deconstruct Amazon one number, one dollar, one Prime member, one cardboard box at a time.

Almost 25 years ago, Amazon.com went live and changed the way the world bought books. Today, Amazon ($AMZN) sells everything from books, to music, to clothes, to household supplies, to flooring. Its founder, Jeff Bezos, famously wrote the business plan for Amazon during a cross-country road trip with his wife. He launched Amazon from his garage in 1994.

Today, Bezos is the richest man in the world (according to Forbes) with a personal fortune of more than $140 billion. He has, at least indirectly, completely changed the way we shop, read, and consume entertainment.

Amazon accounts for about half of every dollar spent online in the U.S. It sells more than 500 million products worldwide. But Amazon is bigger than you think. It isn’t simply an e-commerce company. It is a logistics company. It sells food. It manufactures robots and hardware. It is a movie studio. It is the largest provider of cloud infrastructure in the world. Amazon is the world’s second most valuable company behind Apple.

In 2017, Amazon had more than 566,000 employees worldwide with 40,000 of those in Seattle. If you look at Amazon’s Seattle-based employees vs the total working age population of the city (about 528,000), that comes out to 7.5% of Seattle residents who work at Amazon. To put that in perspective, if the same percentage of working-age residents of New York City worked for one company, it would have 488,000 local employees.

Amazon Is A Retail Giant

Amazon handled 44% of all online sales in the U.S. in 2017. It has grown beyond books, becoming the main way people buy just about anything—especially for Amazon Prime members. By the way, Prime membership ratios are up from 33% in 2015 and 25% in 2012. 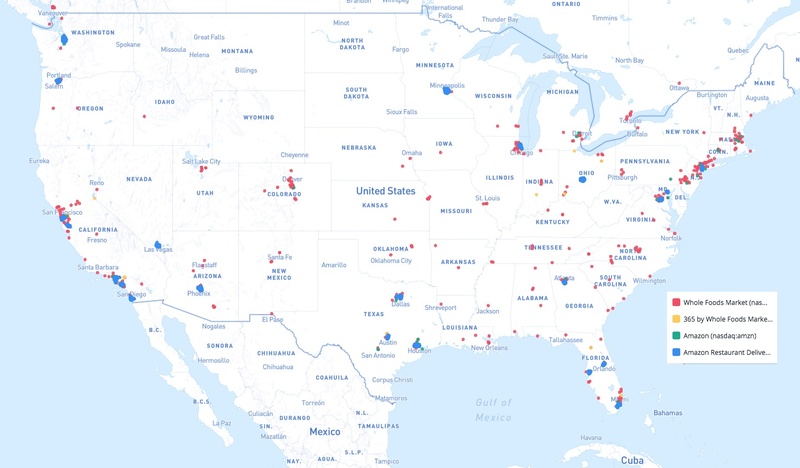 There are more than 100 million Amazon Prime members. That’s about 40% of the total adult population in the U.S. The percentage of Prim households is surely more than that, as multiple adults share the same Prime account for the same home. In his annual letter to shareholders, Jeff Bezos revealed that Amazon shipped more than 5 billion items to Prime customers in 2017. That’s 1.4 million packages per day just to Prime members. That’s enough cardboard to blanket the continental U.S. in just five months.

As of 2015, Amazon fulfillment centers were located within 20 miles of 31% of the U.S. population and within 20 miles of 50-65% of its same-day accessible market. I once ordered a book at 11pm and it was delivered before 9am the next day via messenger. It was awesome.

Roughly 45,000 robots roam the floors of Amazon’s warehouses to get those shipments out on time. The robots fetch the product from shelves and deliver them to human employees.

Amazon Vs. Brick And Mortar Retail

Amazon is more valuable than all major brick and mortar stores combined. The company is closing in on an $800 billion valuation. A trillion-dollar valuation could be reached by Amazon in the next 10 months based on the current target stock price of more than $2,000.