The ambitious, bold and hungry start their week with The Business of Business!
Features
10.27.20   4:00 PM Features

UPDATE: On November 3, 2020, Proposition 22 passed in California with an overwhelming majority. Stocks for both Lyft and Uber were up as high as 21.4% and 13.8% pre-market on November 4 following the news.

For Californians, the business of summoning a ride from your phone is likely to change on Election Day. The future of gig work in the state hinges on Proposition 22, the App-Based Drivers as Contractors and Labor Policies Initiative. If passed, the measure would exempt gig workers from being designated workers. Instead, they would remain independent contractors, unable to receive benefits or organize for better pay. This would deal a sizable blow to a labor movement trying to guarantee protections for those whose income solely relies on this work.

Uber, Lyft, Doordash, and other companies sponsoring the initiative have made the dubious claim that Prop 22 would improve workers’ quality of life, provide new benefits, and preserve their “flexible” schedules. Gig workers and employees’ rights groups have countered that Prop 22 would exclude workers from any future possibility of health benefits, overtime pay, reimbursement for work expenses, paid time off, workers’ compensation, and protection from discrimination.

While many news outlets have remarked on the day-to-day happenings of the “Yes on Prop 22” campaign, on which Big Tech has collectively spent an outlandish $200 million dollars, few have fully outlined what Prop 22 means for the future of the American service economy. The business media at-large has presented California’s political fight as a classic horse race narrative, both sides bearing down on the November 3 finish line. This framing prevents us from seeing the Yes on Prop 22 campaign for what it really represents: the present and future business model of Big Tech/Big Gig in America.

Not only will executives fight contractors every step of the way as they push for driverless cars and a workerless business model, but they'll continue to lay off their full-time employees and outsource services. This means liquidating low-to-mid-level positions in favor of cheaper ways of operating: outside consultants, political contributions, and general disinformation campaigns.

With Prop 22, Big Tech Employees are Playing Themselves

While we rightly focus on the issues facing these independent contractors, the problems don't stop there. Unfortunately, recent events show us that not even the “skilled labor” and mid-level management at Big Gig are safe. Months into the COVID crisis, Uber laid off about 14% of its workforce (not including contracted drivers), the majority of cuts coming from community operations and recruiting departments. Lyft cut nearly a thousand employees, furloughed hundreds more, and as Thinknum Data shows, isn’t replacing job postings with any kind of urgency.

It’s hard to see these jobs coming back any time soon, as any real “community” dissipates under the strains of the virus and rideshare companies go into full-gear pushing self-driving cars. We shouldn’t expect these companies to reverse course on the job cuts, even on the other side of a crisis.

Uber hiring data shows that backend developer jobs have been in high demand during the pandemic, while positions in the “People” and Legal divisions are dwindling.

At least one Big Tech employee is privy to the notion that his job isn’t safe. One of the best writings in the entire Prop 22 discourse comes from Kurt Nelson, a mobile engineer at Uber. Nelson’s October 6 opinion piece in TechCrunch urged his fellow developers to vote no on Prop 22, against their bosses’ wishes. A highlight of the op-ed comes when Nelson ties the prospects of developers to that of independent contractors:

Uber claims Prop 22 would be good for drivers, but that depends on the company treating drivers better. I know from my experience working as an Uber engineer there is a slim chance of that happening. At the beginning of the pandemic, we learned Uber was about to embark on a round of layoffs. For weeks we sat around not knowing if we’d keep our jobs and health insurance.

Ultimately the company laid off 3,500 workers in the middle of a pandemic, and they did it via a three-minute Zoom call. For many of us, the layoffs seemed random and arbitrary, as if managers had been given a quota of people they should fire, not dissimilar to the way in which Uber deactivates drivers without recourse. The entrenched culture of not caring about workers had extended to engineers. We realized we too are a fungible resource.

Standing outside the company, we could see such layoffs as yet another case of tech companies raising billions, then laying off thousands in their greatly accelerating push towards post-humanism. The ending line of Nelson’s anecdote shows us that’s not quite right.

Obviously, the mid-level work is still there to be done. Propositions don’t pass themselves, as all the spending in this historic campaign has shown. Before the pandemic, middle management might have been asked to sell out the independent contractors to save their own jobs — execs would have forced their employees to market, code, and sell Prop 22 to the public (and surely, many middle managers are doing this as we speak). The problem for companies that choose that route is that an organized workforce, made up of conscientious people like Nelson, could potentially fight against their bosses' wishes and turn public opinion the other way.

Clearly, for Big Tech, the solution is to preclude that possibility by cutting staff and looking elsewhere to do the dirty work. The trend is clear. In this kind of corporate culture — always in crisis, always ready to cut positions and trim headcount — no one below the executive level is really safe.

Contributions to Yes on 22

The Yes on Prop 22 campaign expense report gives us an interesting window into Big Tech’s brutal calculus. Scan its columns, and for every employee fired and funged, you can see the ad, poll, or mailer that Big Gig bought with their salary. 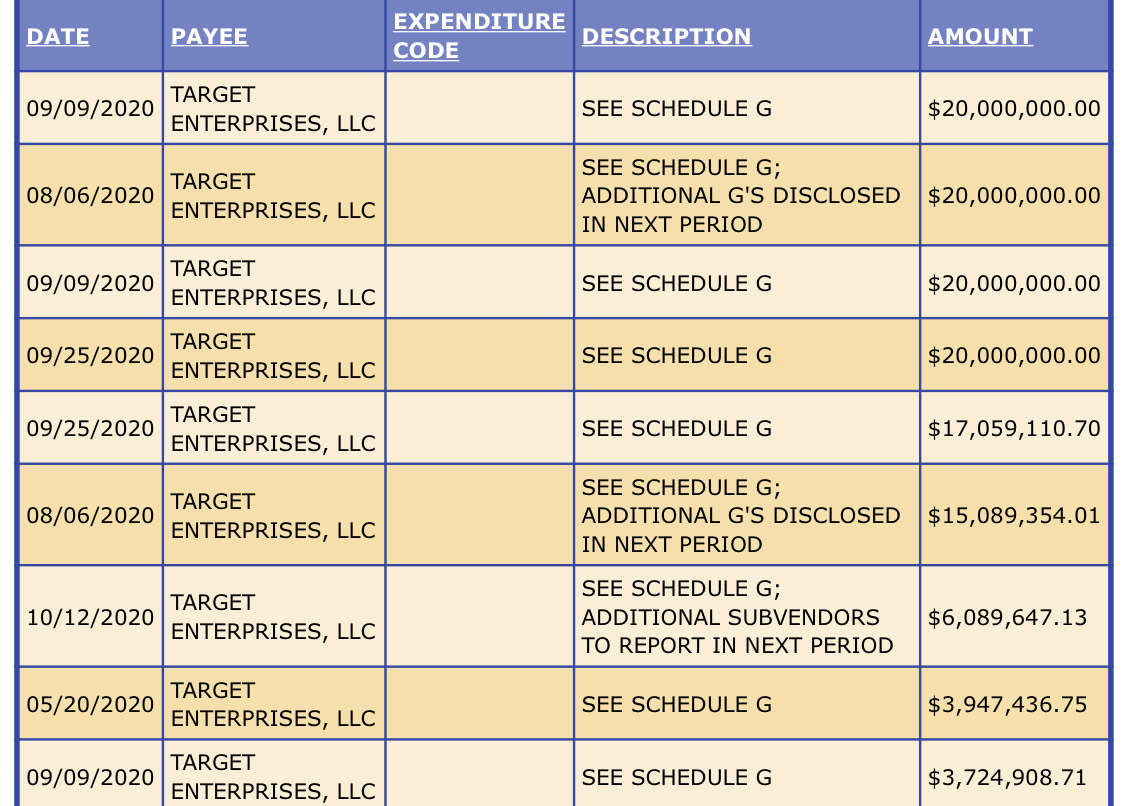 Beyond that, you see scattered expenditures in the hundreds of thousands of dollars. Yes on Prop 22 paid Chris Mottola Consulting, a go-to admaker for top GOP politicians like John McCain, $188,000 in October, $245,000 in September, and $377,000 in July for ads like the one above.

These comparatively small amounts make the expenditures more pointed. For instance, Uber employees in Community Operations (one of the company sectors most prone to recent layoffs) tend to make a yearly salary of $70-80,000. Cut five of these positions — of course, Uber cut far more — and those resources can fund the next Vote Yes on 22 ad spot.

The GOP isn’t the only party to blame. Pro-22 companies have bought off plenty of "progressive" organizations and politicians. California NAACP President Alice Huffman is an especially worrying example. Huffman has been publishing shameless pro-22 agitprop after an $85,000 payment to her consulting firm earlier this year (the salary of yet another mid-level position at Uber or Lyft). According to media watch dogs, Huffman has made an incredible $1.2 million this year as a public affairs consultant, cynically recasting Prop 22 and other pro-business measures as good for minority workers.

Looking beyond the Yes on Prop 22 war chest to happenings in Washington, we can see just how deep this problem goes. While Uber and Lyft cut their workforces, they also hired a record number of Hill lobbyists in 2020, according to a report from OpenSecrets. They added 40 lobbyists this year, 34 of them categorized as "revolvers," or lobbyists that were previously public servants. Lyft has spent $760,000 on lobbying this year and has retained the services of 36 lobbyists—29 of which are revolvers.

Remember that fateful time a few years ago when we were all blitzed with messaging on how Lyft is a different company from Uber? You could feel safe knowing the company behind the pink moustaches was operating with a far less vicious corporate culture and a more humanistic ethos? Well, here’s the equalizer: both rideshare giants put $50 million toward keeping their workers off the books in California, choosing instead to give that money to the consultant shills, the Republican Party, and ex-public servants looking for corporate handouts. We shouldn’t buy the received Big Tech wisdom that salaries and lobbying fees come from different parts of the business. The calculus here is trading jobs for consultants, jobs for ads, jobs for influence.

Big Tech’s “make the world a better place”, California-mindfulness, workplace-as-playground philosophy was always compensating for something darker buried in its structure. Now, during the second market crisis of its existence, the contradictions are truly laid bare. Make no mistake, the brutal job cuts and opportunistic bribes of the Yes on Prop 22 campaigns aren’t one-offs for companies like Uber, Lyft, DoorDash, Instacart, and Postmates. Rather, this is the blueprint of the post-work future. Why pay for drivers’ benefits or middle-level employee’s pensions when a disinformation campaign and few well-placed payments will suffice?

We have reached out for Uber and Lyft for comment and will update with responses.