On September 17, Twitter addressed an "error" that allowed advertisers to target users based on phone numbers. The same day, it posted an ad for someone to address the problem. More than four weeks later, the company disclosed the mistake.

Twitter ($TWTR) has some trust and safety issues on its hands.

The timeline of events here is curious:

On September 17, Twitter addressed an "error" that allowed advertisers to target users based on phone numbers. The same day, it posted an ad for someone to address the problem. More than four weeks later, the company disclosed the mistake.

Some context: A year ago, Twitter began hiring for a new "Trust & Safety" group in earnest.

One then has to ask: did this new group of professionals know? If so, can users trust them? And if not, how are users to trust the safety of their information on the platform if those who handle trust & safety for the platform aren't aware of how data is protected?

The admission by Twitter, titled "Personal information and ads on Twitter" was posted to its Help Center. The admission implies that the error was a mistake and was addressed on September 17. In short, it states that users' phone numbers were used to allow advertisers' marketing lists match with Twitter users, clearly not a thing that users who chose to use their phone numbers for additional account security intended when they signed up in the first place.

On that very same day (September 17), Twitter posted a "Specialist, Ads Policy" position for the group who would, according to the job description, train "internal partners to educate on [ad] policies". It is part of the "Ads Policy" team that helps re-evaluate Twitter's advertising products "in response to incidents". On October 8, Twitter admitted the error to the public. 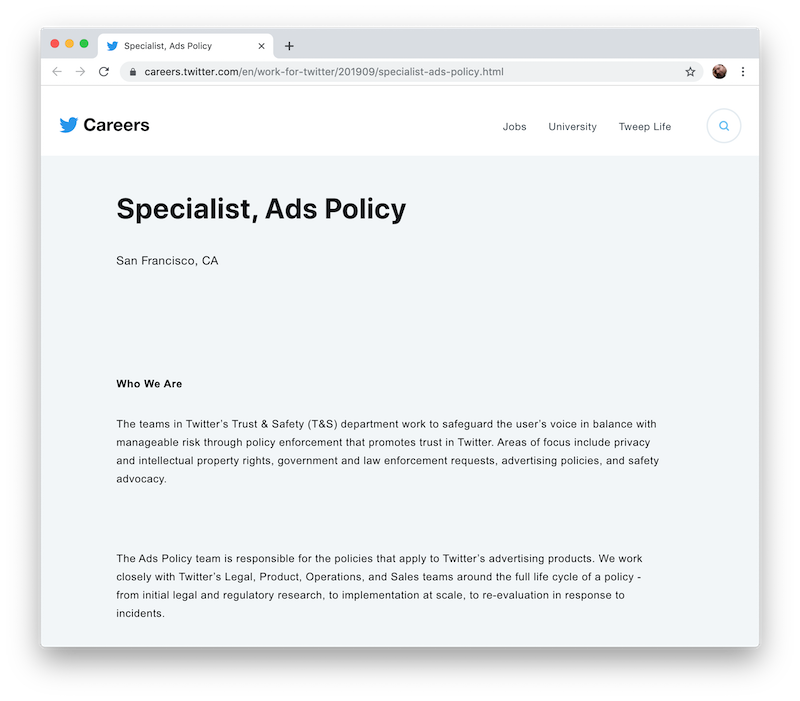