The law requires employers like Vox to reclassify contract workers as employees. Rather than reclassify the workers — an arguably expensive and inefficient matter — Vox will be ending about 200 contracts, opting to replace them with around 20 part-time and full-time staffers.

While the announcement came Monday, it appears that Vox had already shown its hand in its job posting data. Right around when AB-5 was passed, freelance openings for SB Nation at Vox Media tumbled, while non-freelance opening saw a 3x order of magnitude rise.

AB-5 was voted for in mid-September. The California Senate voted on September 10, the Assembly on September 11, and the law was signed on September 18. Those dates coincide with Vox's shift in hiring activity for SB Nation. The shift is especially apparent when compared to a major shift away from non-freelance workers for SB Nation at this time last year, when jobs categorized by Vox as "Freelance" took the place of those not marked as such on or around December 5, 2018.

The change is also apparent in a categorical breakdown comparison of openings at Vox month-over-month. "SB Nation - Freelance" has been the most in-demand job category at Vox Media since December 2018, as it kept its eyes open for freelance stringers to cover local sports teams.

But right on September 11, 2019 (use the time slider on the bar chart above) — when AB-5 was voted in — non-freelance SB Nation job openings became the second most in-demand category at Vox Media.

Vox's move away from freelancers overall tells a similar story: Hiring for freelance workers — jobs with the keywords "Part-Time", "Contract", or "Freelance" in their titles — reached its lowest point in September just days after AB-5 was passed.

In May 2019, for instance, Vox listed as many as 28 freelance openings on its careers website. On September 24, it listed just 5.

John Ness, executive director of SB Nation, dropped the news and details in a blog post titled "Thank You, California" on Monday. In the post, he states that the company will end its contracts with "most contractors at California brands" and will create a "team of new SB Nation employees".

Ness explains that the new law restricts contractors from producing more than 35 written content "submissions" per year, going on to say the company will instead open up new roles and "create full-time positions at [its] biggest communities".

Comments on Ness' post (192 of them as of publishing) — ostensibly from contractors affected by the news — are understandably heated, most asking for clarification. 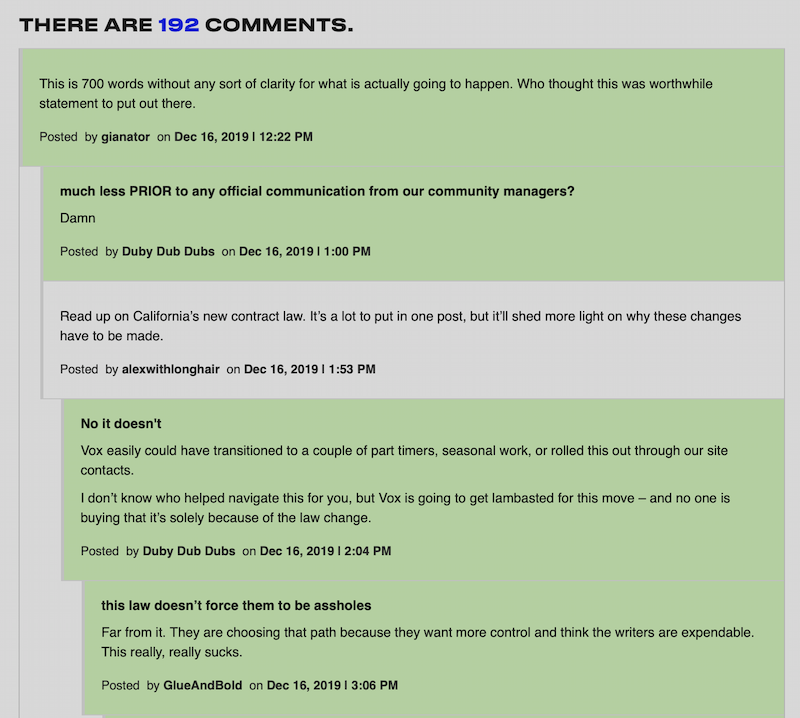 If said commenters need any clarification, they may want to look at the graphs above: it seems Vox made it clear what was happening back in September when AB-5 was passed.

The former healthcare worker, who doesn’t publicly reveal her name, boasts nearly 150,000 followers each on Twitter and TikTok, and 70,000 followers on her YouTube channel.
Michael Y Park
9.14.21   7:25 PM
Features

Hotels are massively upgrading technology and systems to be able to offer guests peace of mind, as the high-end travel market shows signs of growth.
Stav Dimitropoulos
9.13.21   8:36 PM
Markets

This week, Bitcoin became legal currency in El Salvador. Meanwhile, Coinbase took a hit when the SEC threatened to sue the company over its latest feature.
Ivan De Luce
9.10.21   8:56 PM
People
View All