The ambitious, bold and hungry start their week with The Business of Business!
Tech
5.2.18   1:49 PM Tech

Fortnite was the most-streamed (and watched) game of April

Fornite: Battle Royale, Epic Games' online survival shooter game (of the battle royale genre) that has the videogame industry in a frenzy it hasn't seen in years, just finished a dominant April. Now free to download for anyone after a long closed beta period, the game has surpassed competitor Player Unknown Battleground on the iOS App Store most-downloaded games. It also sits at a healthy 4.6 out of 5 stars and is the number-one action game on the App store. 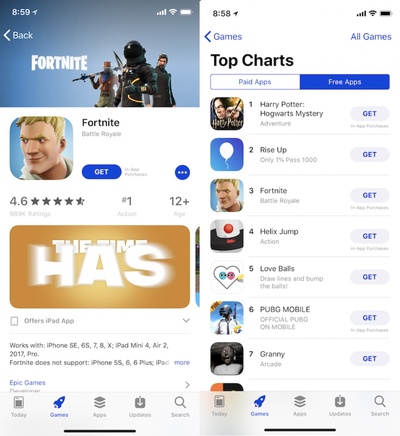 But what's even more mindbending is the number of people who were watching other people play Fortnite during the month of April. On the evening of April 22, 623,000 people were watching Fortnite streams on top-videogame-streaming service Twitch.tv. The lowest number of concurrent stream viewers was in the wee hours of April 12 with 30,900 viewers.

To put this into perspective, the second-most-watched game on Twitch in April was E-Sports stalwart League of Legends, which had its peak stream on April 8 with 442,640 viewers.

Here's how the two games compared side-by-side for the month of April:

For the uninitiated, Twitch is a free service that features live video streams of people playing games while other people watch and chat with both the streamer and with one another. Viewers can tip the streamer, turning the service into a serious money-maker for some of the more popular channels. Twitch's top streaming, called "ninja," has 6.5 million followers and has claimed more than 157 million channel views. According to Forbes, he's pulling in about $350,000 a month from streaming.

In terms of reach, 962,000 people on average are watching a stream on Twitch at any moment. This makes viewership as large - and in some cases larger - as CNN, Fox News, MSNBC, and ESPN. Twitch.tv is owned by Amazon ($AMZN).