The ambitious, bold and hungry start their week with The Business of Business!
Markets
2.6.19   4:05 PM Markets

Harley-Davidson is shifting to Thailand as factory builds up, tariffs make impact

Harley-Davidson is now ramping up hiring for manufacturing jobs at its recently-opened factory in Thailand.

Update: A Harley-Davidson spokesperson reached out after this article was published and sent the company's statement on the decision to close its factory in Kansas City, “This decision was made after very careful consideration of our manufacturing footprint and the appropriate capacity given the current business environment. We are constantly evaluating capacity and our current U.S. capacity exceeds U.S. demand.”

Harley-Davidson ($HOG) had one of its worst earnings periods in company history last quarter, with the company still reeling from President Donald Trump's steel and aluminum tariffs that directly affected motorcycle production.

In May, a labor union representing Harley-Davidson workers said the company would move production to Thailand as a Kansas City factory closed. In January, the company was ready to spin up operations at a new Thailand factory that was being built as early as May 2017.

According to job listings data we track via Harley Davidson's recruiting website, hiring in Thailand has begun.

Most of the jobs currently available in Thailand are in skilled labor positions such as Supply Management and Manufacturing. One titled "Engineer Manufacturing" can be done without a Bachelor's Degree and with 3 years of related experience. 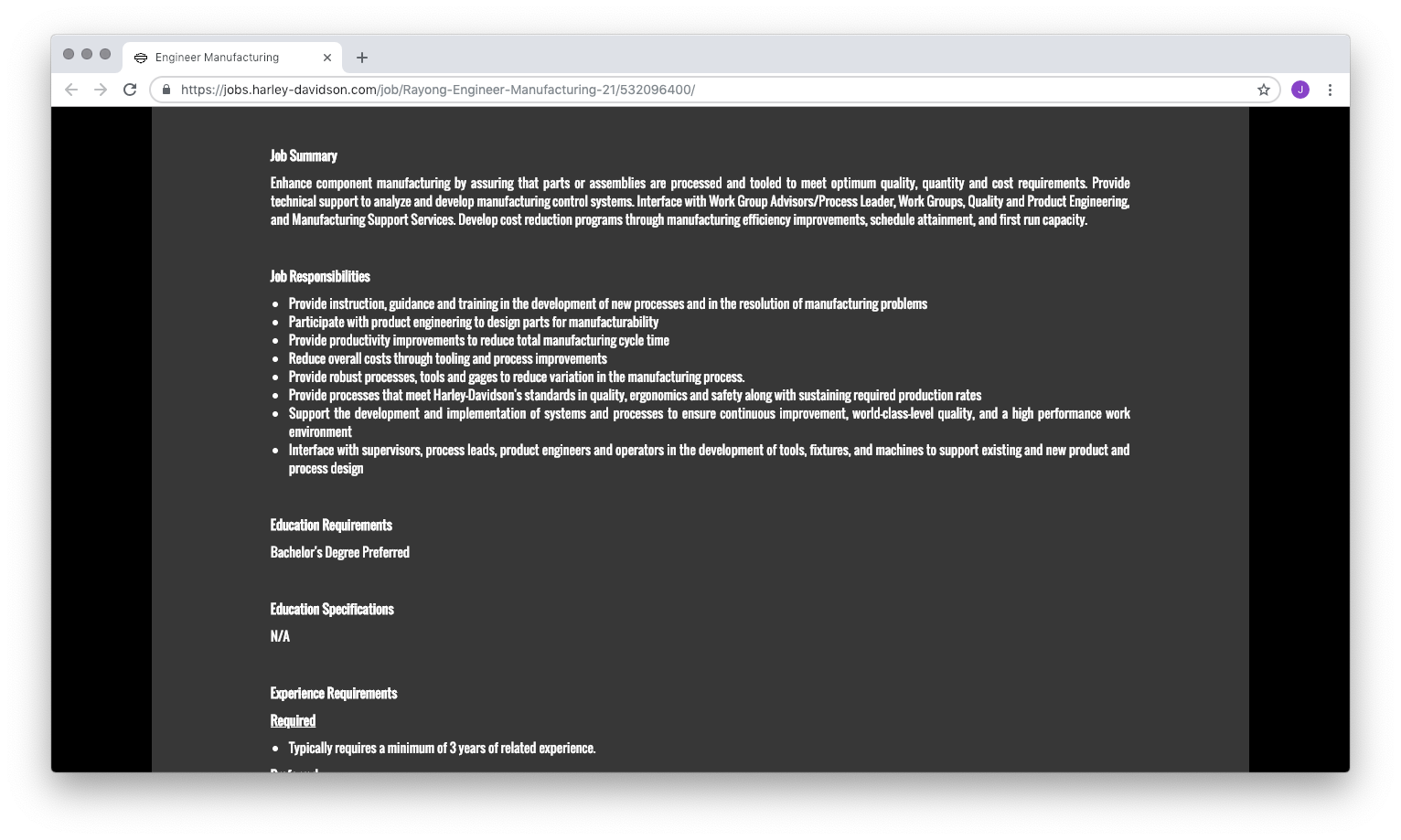 These Manufacturing jobs in Thailand showed up on November 21, 2018, but began multiplying last month in a signal that Harley-Davidson is ready to fire up more resources at new factory.

This analysis is in line with the company's recent quarterly earnings report, where Harley Davidson specifically said that it would boost investments to Thailand so that it can ship bikes to the European market without worrying about tariffs.

Meanwhile in America, save for a couple of spikes around the same time as Thailand's boom in Manufacturing jobs, hiring has remained relatively steady for the number of positions on offer in that field stateside.

As a company that has had a loyal American following since 1903, Harley-Davidson faces a crisis not only with its profit margins, but also with its image. It survived the Great Depression and became a symbol of the American dream: those who want to one day own a Hog and ride off into the sunset.

But now, with the company shifting production to Thailand, Harley-Davidson is now turning to "cultural influencers" to attract a younger and more diverse group of riders. This boils down to signs that the company is trying to stay above water as steel and aluminum tariffs dig into its bottom line. By the looks of its negative sales growth both in the states and internationally, Harley-Davidson is sputtering into 2019.