The ambitious, bold and hungry start their week with The Business of Business!
Markets
2.12.18   6:48 PM Markets

Gun sales have spiked after mass shootings. But that may be changing under Trump.

The worst single-gunman shooting in US history, in Las Vegas last October, inspired many reactions, ranging from calls for greater gun control to a movement for renewed vigilance on Second Amendemnt rights. The reaction of America's largest gun manufacturer, Sturm Ruger is perhaps most interesting of all.

They cut the price of their pistols.

Here's the data, from our Thinknum price tracking. You'll see two moments when Sturm Ruger dropped their prices - one being Christmas, and the other in the aftermath of the aforementioned Vegas shooting.

It's not a terribly surprising reaction. Major incidents of gun violence often lead to calls for new, sweeping restrictions on gun ownership, and that in turn has led to panic-buying by those who fear their access to firearms is in danger.

We can get a sense of how many firearms are sold by tracking the number of requests for Federal background checks that gun sellers have put in. Last year, Bloomberg published this chart: 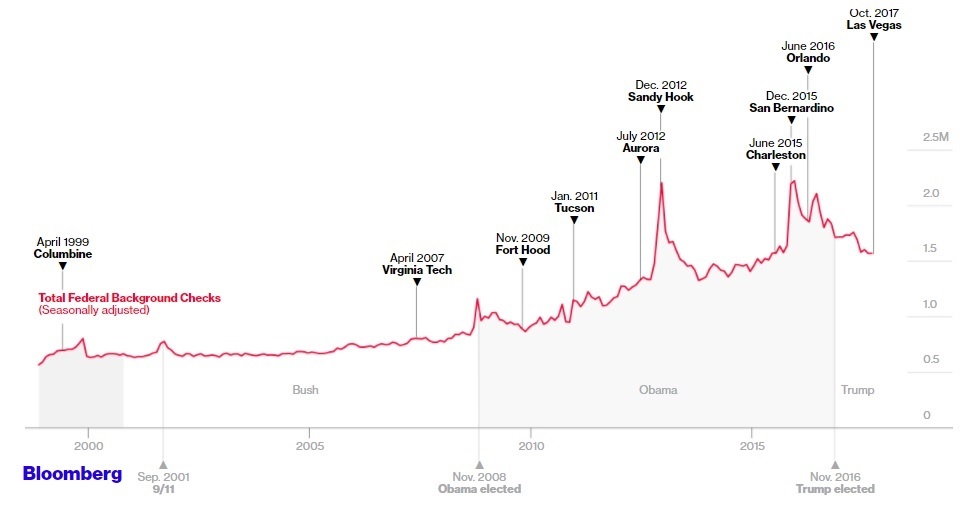 The expectation was that we'd see a similar spike in sales after Vegas, but that didn't materialize. With the more gun-friendly GOP in control of both houses of Congress and the White House, there may have been less fear that the incident would lead to new restrictive gun legislation.

Gun sales have been down across the board - on the chart, you can see background check requests tailing off after Trump's election. And just this week, the second-largest firearms manufacturer, the Remington Outdoor Company, indicated it was facing bankruptcy reorganization.