The ambitious, bold and hungry start their week with The Business of Business!
People
3.12.18   4:00 PM People

The opioid problem: Who's buying, who's selling, who's hurt most

Who's buying - and overdosing - on opioids, and where (including a mind-bending map).

There's plenty of blame to go around when it comes to intergenerational warfare in the U.S., but we found numbers that show that a certain cohort is dying from opioid overdoses at a rate that's noticeably higher than any other age group.

Boomers, we're looking at you. And we're not just making generalizations – we have the numbers to prove it.

In his book Enlightenment Now, Harvard professor Steven Pinker points to data from the National Safety Council that shows that "opioid overdoses are largely an epidemic of the druggie Baby Boomer cohort reaching middle age."

Say it ain't so, I think to myself, an old codger who's smack-dab in the middle of the subset that Pinker's writing about.

He invites us to dive into the data and "do the subtractions," telling us we'll find that "it's the members of the generation born between 1953 and 1963 who are drugging themselves to death."

So we did: We found those data from the National Safety Council. Then we did those subtractions he suggested, and it looks like we're guilty as charged.

In the Safety Council's 2014 study, "poisoning deaths" (that's the category of drug overdoses in studies like this) were dominated in that year by those who are between 55 and 65 years old today: 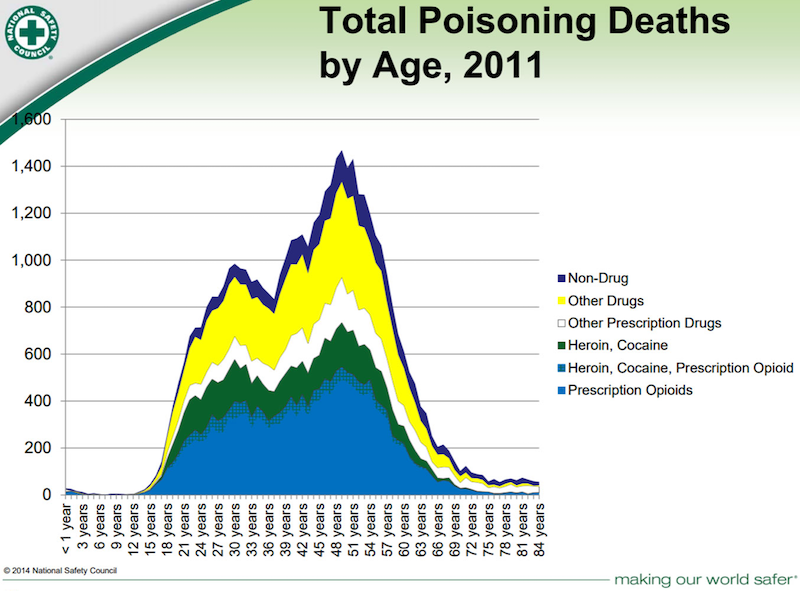 Follow that cohort back in time, and look at who's dominating drug overdose deaths in each decade depicted in the following graph. That's right, we've seen the enemy, and it is us. 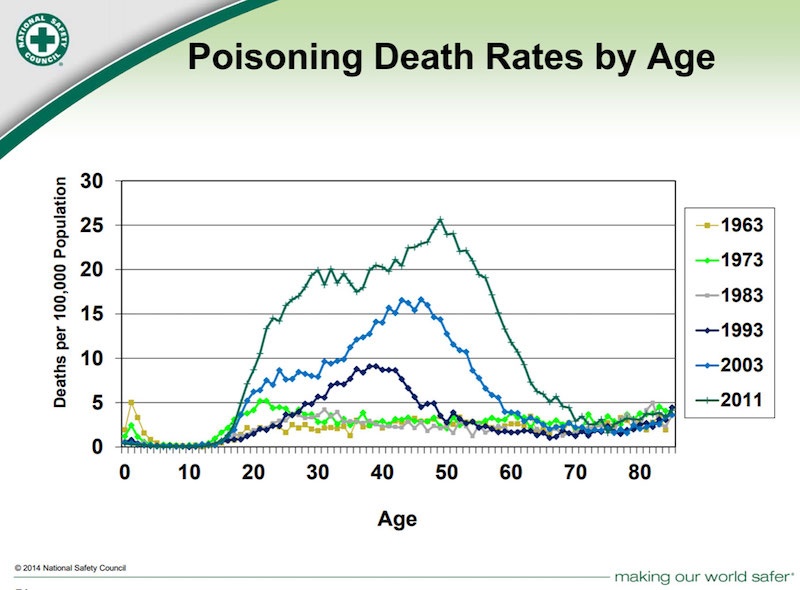 After looking at these stats, you might be wondering, why Baby Boomers?

There's a variety of factors at work. The most obvious reason might be the atmosphere in which this group grew up, with the glorification of drug use in the "flower power" decade that seemed like such fun in my most impressionable years. "If it feels good do it" was the catchphrase of the decade, along with Harvard professor and mind-expansion advocate Timothy Leary's "turn on, tune in, drop out" mantra.

But that's likely not the only reason.

Those of us in that particular age group are steadily succumbing to the inevitable, and along with that we're acquiring a nice menu of chronic conditions. The latest U.S. Census shows 92% of older people in the U.S. are suffering from a chronic condition, and the least lucky ones – 41% – are hobbled by three chronic conditions or more.

Those chronic conditions — in many cases — are treated with opioid-based pain killers.

And in fact, there has been a noticeable surge in opioid prescriptions between 1998 and today. According to the Centers for Disease Control and Prevention, "In 2012, health care providers wrote 259 million prescriptions for opioid pain medication, enough for every adult in the United States to have a bottle of pills." In a 2016 study, the organization cited an alarming rise in opioid prescriptions, increasing 7.3% from 2007 to 2012.

The worst news is that when we put all these prescriptions and age groups together, and take a look at the latest statistics of drug overdose deaths since the beginning of 2015. This table of data was compiled by the CDDC, the National Center for Health Statistics and the National Vital Statistics System, and shows deaths up to the last month of 2017, for which the data are still incomplete: 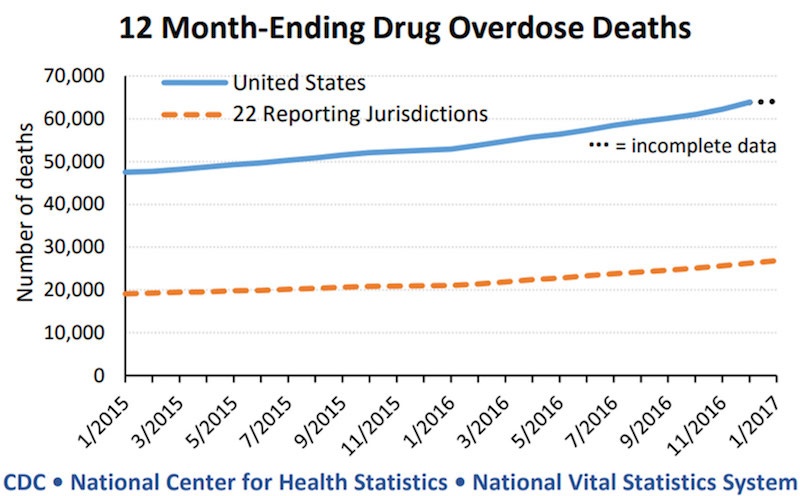 Here's the kicker (no, really):

While doctors continue to prescribe opioids, another American industry, the ubiquitous pharmacy, is also getting in on the action. When we pulled up CVS locations in our Thinknum mapping tools and overlayed median age, you see a very interesting - and telling - pattern: pharmacy locations tend to cluster aound older people. Of course, this could also be because pharmacies cluster in urban centers where more older people may live, but the correlation is visually clear, as seen below (click the image or here for a giant version): 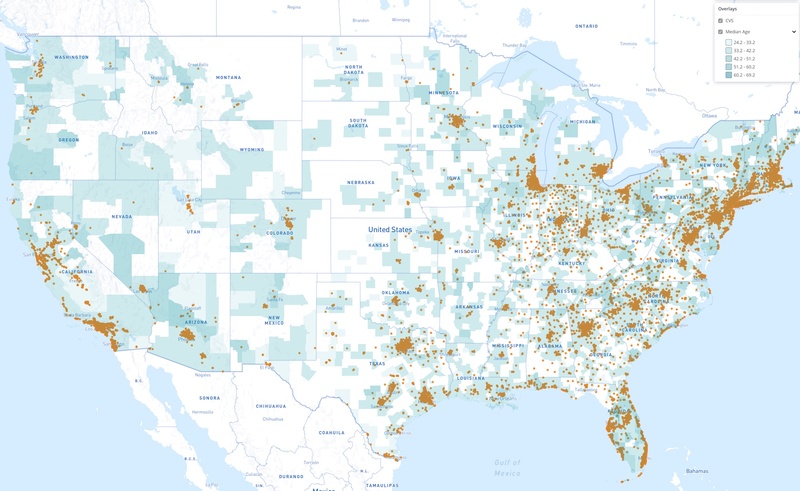 Finally, according to experts, this trend will only continue.

Dr. Guohua Li, lead author of a Columbia University study of the opioid epidemic, writes, "Since 2010, the prescription opioid overdose death for those in their late 40s to 60s increased faster than those of other age groups." But don't get too smug, millennials, because the good doctor added that "heroin overdose death rates for those in their 20s and 30s increased faster than those for any other age group since 2010."