The ambitious, bold and hungry start their week with The Business of Business!
Features
10.3.19   1:22 PM Features

GrubHub is looking to use its acquired Tapingo platform to get in on the point-of-sale experience at partner restaurants.

New job listings discovered at GrubHub's ($GRUB) careers site reveal that the company is quietly launching "GrubHub Ultimate", a point-of-sale ordering and operations platform based on technology the company acquired in 2018.

A position titled "Account Manager, Ultimate" has now been posted three times to GrubHub's careers site, first on July 17, 2019, and then again on August 14 in New York City and then most recently on September 24 for Chicago.

We reached out to GrubHub, who confirmed the new product, explaining that "Ultimate came to Grubhub through [its] acquisition of Tapingo last year, and it's already in use at select locations." It will be led by Daniel Almog, a senior vice president at Grubhub and co-founder of Tapingo on which the new platform's technology is based.

The job listings are part of the "Tapingo" group at GrubHub, named after a campus food ordering platform that GrubHub acquired under the same name in September 2018. Hiring for the group appears to have kicked off in July for a select group of positions. As of last week, there were just 2 open positions for the group (out of a total of 140 openings for the company). 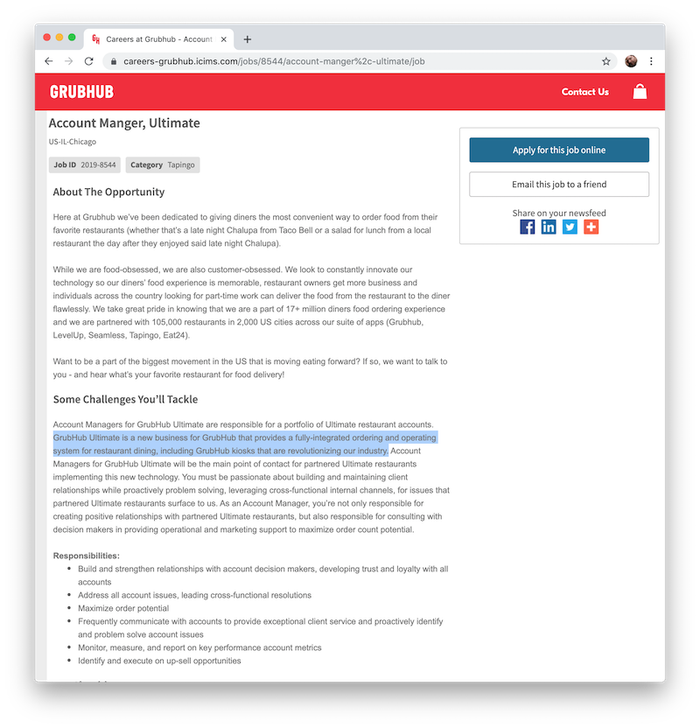 GrubHub has been under fire lately for the steep commissions it charges restaurants, which can top 30% for businesses already struggling to cover overhead.

If the company bends to pressure, it stands to lose a significant revenue source via commissions. As part of future planning and scale, it appears the company is in search of new revenue sources, including closing the point-of-sale gap between storefront and customer. Ultimate could provide new forms of revenue beyond simple commissions, including SAAS scubsciptions, support, and product rentals, similar to what companies like Square and Stripe already do.