The ambitious, bold and hungry start their week with The Business of Business!
Markets
8.20.18   8:34 PM Markets

When looking at America's largest REITs, GNC claims the most stores, beating out food services and even fashion retailers.

The American shopping mall is known for fashion retailers like Forever 21, food courts speckled with Starbucks and Aunit Anne's Pretzels, and halls bedazzled with Sunglass Hut.

So it came as some surprise when we ran the numbers for America's most populous retailers via America's largest REITs (Real Estate Investment Trusts, also known as the landlords of the malls) that health and nutrition chain GNC ($GNC) currently rules the shopping mall.

Here are the top 10 tenants by store count across shopping malls owned America’s Real Estate Investments Trusts (REITS) as of Aug. 15 (subscribers can get the full list here):

Pittsburgh, Pennsylvania’s own GNC is the clear leader with 785 locations within malls. In 1981, the founder of GNC, David Shakarian, actually said, “We try to go into every major shopping center in the U.S.”

Decades later that goal seems to be achieved as the company has dominated the vitamin and supplement market, becoming the most-common tenant you’ll see in a mall. How “Steel City” became “Iron Supplement City” should be left to historians.

A quick look at the map of GNC store locations reveals a the company’s ubiquitous retail footprint: 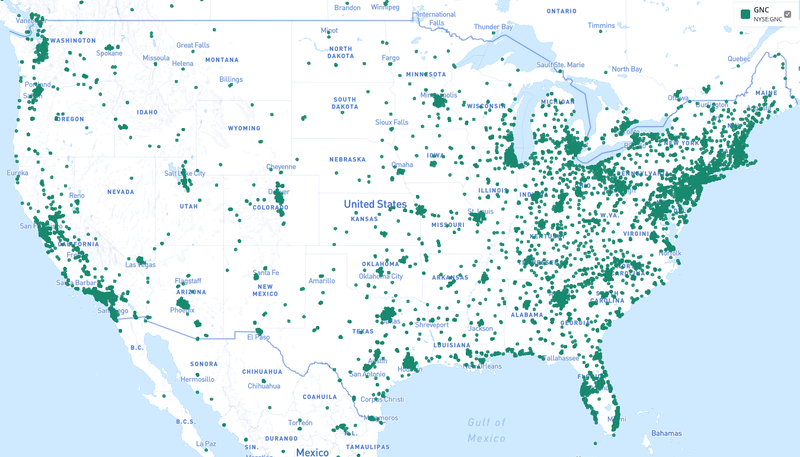 From the depth of Nebraska to the sweltering beaches of Florida, if you need your fish oil fix there is likely to be a GNC close by. Thinknum’s data shows there are about 60 GNC locations in New York City alone; you can’t walk more than a few city blocks without passing one of their stores.

When looking at the list of the top ten tenants it's noteworthy that Subway is in the third spot, representing the only restaurant in the list. Top competitor McDonald’s is far more than a foot-long behind in 42nd place. Subway has campaigned for years that they are the healthier option and this branding has allowed them to surpass McDonald’s in store count. Although GNC and Subway are aligned with the wellness trend both companies have had issues as of late: GNC plans to close 200 stores this year while Subway will shutter around 500.  Given that these companies have stores you would mostly commonly see in a mall, it appears they have over-saturated their perspective markets and are not exempt from the ongoing threat of ecommerce plaguing retail real estate.