The ambitious, bold and hungry start their week with The Business of Business!
4.12.21   7:00 PM People - Profiles

An inside look at Future, the $150-per-month fitness app that promises to hold you accountable

Future founder and CEO Rishi Mandal spoke about tackling America’s obesity problem by pairing users with a remote personal trainer. I tried out the app and found that it's worth the high price tag.

There have never been more options for getting fit, from at-home products like Peloton or Mirror to fitness class marketplace ClassPass, to the nearly endless supply of YouTube workout channels. Despite being spoiled for choice, Americans are only getting fatter (and we’re not just talking about the Quarantine 15). So what’s missing? According to Rishi Mandal, it’s accountability.

Mandal is the co-founder and CEO of Future, a fitness app that pairs you with a personal trainer. Users work with their coach to plan out customized workouts best suited to their needs, and the coaches are available throughout the day to guide, answer questions, and motivate.

“If you have another human in the loop, it activates a certain physicality in your body where you want to rise to the occasion, not disappoint them, or really meet them at their effort level,” Mandal said.

As more Americans are looking for new ways to get fit, Future has seen growth triple since the pandemic began, with a whopping 90% retention rate, higher than most other fitness programs. The company was founded by Mandal and CTO Justin Santamaria in 2017, and raised a $24 million in a Series B round in October 2020, led by Trustbridge Partners. Other investors include Founders Fund, Khosla Ventures, Kleiner Perkins. The app’s $150-per-month price tag may seem steep, but Mandal says it’s not only cheaper than an in-person trainer, but comparable to high-end gyms or fitness classes.

Mandal’s childhood was spent around technology. In fact, his dad started a $2 billion tech company called Cyras Systems from the family garage when Mandal was a kid. “At a pretty early age, I encountered this idea of inventing things out of nothing, and that you would go and get funding for something like that,” he said. “I had a dozen patents by the time I was 16 for really stupid little things, but I just loved the process of building things, inventing.”

“There are these five lifestyle factors we grapple with every single day...how you move, how you eat, how you sleep, how you deal with stress.”

Before founding Future, Mandal was director of product at Postmates, which had acquired his previous startup, Sosh, an events app for Bay Area locals. He then spent a year as an entrepreneur-in-residence at Khosla Ventures, where he first discovered a range of healthcare startups. That’s where the idea for Future came about.

“As I'm listening to all these brilliant people talking about their ideas, I start to get this picture of health in America,” he said. “It's shocking that 70% of us are obese or overweight, seven out of every 10.”

Since then, Mandal’s focus has been on fitness as the ultimate solution to health in America. The company’s first trainer was hired via Craigslist, but now it'll have 1,000 professional coaches working with users by the end of the year.

“There are these five lifestyle factors we grapple with every single day that end up having this big disproportionate impact on not only how long you're going to live, but how good those years can be,” Mandal said. “And those five things you do on a daily basis, are how you move, how you eat, how you sleep, how you deal with stress.”

After signing up for the program, you choose your coach on Future’s site. Then you’ll put down a $200 deposit to receive an Apple Watch, which your coach uses to monitor your heart rate during your workouts. One of the first things you’ll do before getting started is meet with your coach, where you’ll go over the types of workouts you want, what your day-to-day availability is, and what your long-term goals are. Your coach will then send a weekly workout schedule that details exactly what you’ll be doing from minute to minute.

"If you have another human in the loop, it activates a certain physicality in your body where you want to rise to the occasion."

Once you’re working out, you’ll be guided by workout videos and coach voiceovers. And you can always message your coach if you have any questions. If you’re not sure about your form, for example, there’s a feature on the app that lets you take a picture of yourself to send to your coach.

The workouts themselves are flexible — if you want, you jog five times in one week, then switch over to at-home workouts the next week. You’ll also have a monthly call with your coach to go over your progress and make changes to your program.

Trying out the program

To put Future to the test, I signed up for a 30-day trial. I got my Apple Watch, met with my coach, and set up a workout schedule. I was looking for something to challenge myself, as I’m not exactly a gym rat. While some people took the pandemic as an opportunity to get fit, I took a decidedly different approach. In short, I was far from the ideal consumer. But my coach talked me through some options, and we settled on a weekly schedule of four 30-minute workouts per week, focusing on building muscle, strengthening my core, and even some yoga. When I told my coach I didn’t have so much as a dumbbell for my workouts, he created a plan suited to my needs. 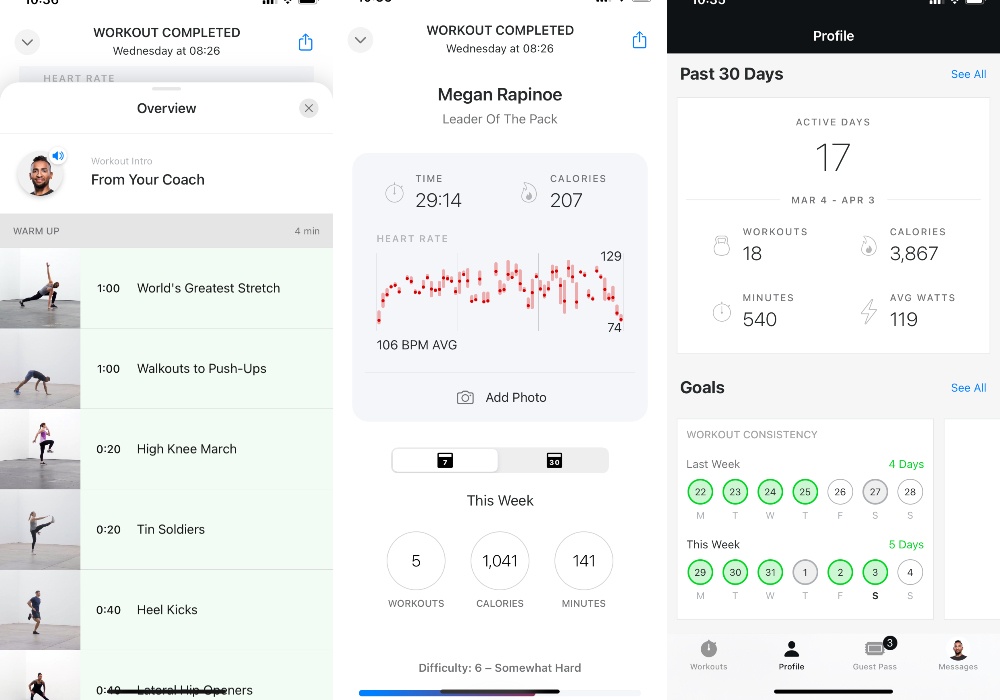 While it was difficult to adjust to four workouts every week, I found that working out on weekday mornings gave me more energy throughout the day and improved my mood. I was slowly realizing those fitness junkies were right. Whenever I didn’t feel like working out (usually once or twice a week), I just let my coach know that I would make up the session in the evening, or the next day. Coaches aren’t actually there with you during workouts anyway — they monitor your progress after you’ve completed the session — so it was easier than cancelling on a personal trainer, while still retaining accountability. After all, I didn’t want to let my coach down.

In that month, I worked out 18 times and burned almost 4,000 calories in 540 minutes. That’s probably more exercise than I’ve gotten since college. If anything, my month with Future proved that accountability really does work, and that even a relatively sedentary person like me can see progress in a short amount of time. I’m not sure if I’d be able to keep it up for a long period of time, but that says more about my laziness than it does about the app’s functionality. For those looking for a consistent, challenging (albeit pricey) program, Future doesn’t disappoint.