The ambitious, bold and hungry start their week with The Business of Business!
Markets
3.26.18   5:25 PM Markets

Five years after Frozen was released, we still can't... let it go

What's up with Frozen? It's been five years since the film's theatrical release warmed the hearts of little girls everywhere (and just about everyone else), and when it comes to continued sales and spin-offs, there's no sign of a spring thaw.

The franchise is all over Disney's theme parks, there's a Frozen on Ice (of course), and the Broadway musical adaptation opened this past weekend.

Just look at these crazy numbers for the soundrack, or rather, soundtracks. The main album, which features both the songs and the film's stormy score, hasn't dropped off the charts yet, and was among the top sellers throughtout last year's holiday gift-binge season. A secondary CD, "Frozen: The Songs", without the instrumental score, has also been a regular seller: 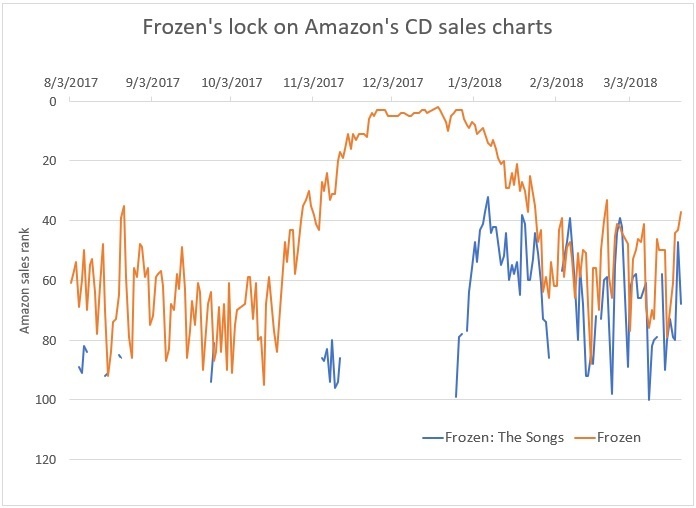 And as for the DVD of the film, there have been a couple of interruptions in the ice age - when it dropped out of the top 100 - but mostly it's just flowed along at a  steady if glacial pace:

And again, if you can't wait for Frozen 2 (currently scheduled for release on November 27, 2019), check out the Broadway musical, which opened this past weekend.