The ambitious, bold and hungry start their week with The Business of Business!
People
3.23.18   3:41 PM People

Charting life after death for The Cranberries' Dolores O'Riordan

Music sales spike after our favorite artists are taken from us. We've got the data...

Where do we go when we die? For the best recording artists taken from us too soon, it's back to the charts — at least for a brief moment of reflected glory.

When Dolores O'Riordan, lead singer of beloved Irish band The Cranberries, died suddenly on January 15th, it shocked her legions of fans. We felt something perfectly natural - we wanted to hear her lush, sultry voice again. So we went to Amazon and bought her albums.

New fans puchased a greatest hits package, casual fans finally got a copy of the band's most recent album, and hard-core fans snagged a replacement for their worn-out edition of the Cranberries' debut, 1990's "Everybody Else Is Doing It, So Why Can't We?".

We track Amazon sales rankings here at Thinknum, so we have the data: Five Cranberries albums and one O'Riordan solo album made it back to the charts: 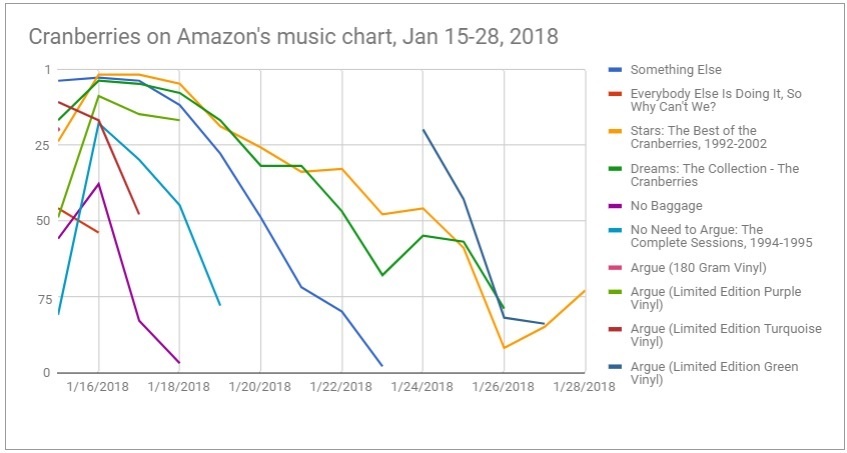