The ambitious, bold and hungry start their week with The Business of Business!
People
4.17.19   2:07 PM People

What do you do when you're a company that's under investigation for privacy and data-sharing violations? You hire a team of specialists to spend a lot of time with those who are investigating you, naturally.

What do you do when you're a company that's under investigation for privacy and data-sharing violations? You hire a team of specialists to spend a lot of time with those who are investigating you, naturally.

Since the new year, Facebook has gone on a bit of a hiring spree for professionals in the Washington, DC area.

In January, Facebook was already on the market for 47 people in the American capital. As of this week, it's opened 68 such job openings.

Facebook has been bringing on experts to help the company avoid the problems it ran into (and created) in the 2016 election, including privacy and trust experts, for some time now. But this is the first time we've dug deep into its growing Wasington, DC presence.

The incoming Policy Managers and Associates appear to be part of an "Executive Branch" team that focuses on Facebook's "economic, security and social good impact". They look to be a team focused on improving Facebook's reputation with policy makers, in short, especially as the next presidential election heats up, when Facebook targeting will once again become a major focus of campaign strategy. 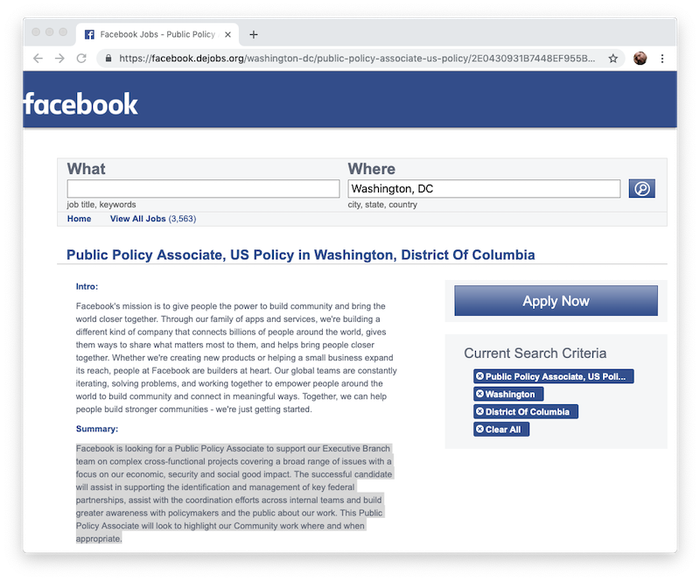