The ambitious, bold and hungry start their week with The Business of Business!
People
3.6.19   9:35 PM People

Just as Mark Zuckerberg promises a more secure social network, the company has opened dozens of privacy-focused positions around the world.

My focus for the last couple of years has been understanding and addressing the biggest challenges facing Facebook. This means taking positions on important issues concerning the future of the internet. In this note, I'll outline our vision and principles around building a privacy-focused messaging and social networking platform.

It's one thing for a tech CEO to make bold promises, but it's another for his or her company to make good on them. In this case, it appears that Facebook is already busy hiring up a storm for people who will lead the charge for the company's aforementioned "privacy-focused vision".

That's because openings for positions with the word "Privacy" in their titles is at the beginning of what is likely to be a massive hiring spree.

Openings for the keyword hit an all-time high of 56 positions as of yesterday. A slight uptick began last summer and into the fall, but this is the first time we've seen growth of this magnitude for this keyword.

The positions are diverse in terms of titles and locations. However, there are some common titles related to risk assessment, legal, and policy.

In his post, Zuckerberg mentions that the focus for the company's privacy concerns is on messaging, and that people "should have simple, intimate places where they have clear control over who can communicate with them and confidence that no one else can access what they share." In order to make good on such a promise, it's clear that the company will be busy hiring a team capable to following through.

One such new opening posted just two days for a "Technical Program Manager, Messenger Privacy" is clear evidence that the hiring process has already begun. 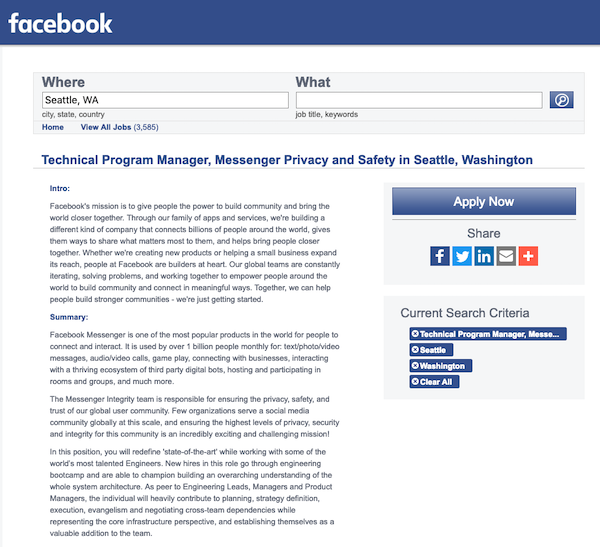 While the new job is located in Seattle, the bulk of the openings are located at Facebook's Menlo Park headquarters.