The ambitious, bold and hungry start their week with The Business of Business!
People
2.5.19   6:37 PM People

Facebook continues to look for experts with backgrounds in data security, privacy, and security. Here's the data.

Facebook ($FB) was launched almost exactly 15 years ago on February 4, 2004. Within days the company was steeped in controversy when the Winklevoss twins accused Mark Zuckerberg of stealing their ideas. Since then, Facebook has dragged a steady stream of lawsuits, privacy issues, and even crimes. But through all of this, the company has continued to grow at a clip rarely seen in western history.

Perhaps the past three years have been the most controversial for Facebook, from accusations of aiding in the dissemination of fake news to the dark market of private information. All of these things have added up to a brand that many people don't trust, while others fear for the safety of their private information.

And, yet despite all this, Facebook continues to grow. Just last week, the company "crushed" earnings and posted record profits.

It also continues to hire. Open positions reached an all-time high this fall with 3,750 open positions. Today, the company is still hiring for 3,400 people across multiple campuses.

But who is Facebook hiring? Keyword trends reveal that Facebook went on a hiring spree for professionals skilled in security and information safety as the brand looks to rebuild trust with users. In face, job titles with the words "security, safety, privacy, or trust" are now five times higher than they were just a couple years ago, and 37% higher than the summer of 2018.

Facebook jobs with "trust" in their titles spiked at 14 in September, with five remaining. Jobs like "Risk Analyst, Trust and Safety" for Facebook's WhatsApp brand is one example from today. Perhaps a more interesting opening is one that was originally titled "Research Scientist, Trust in AI" which has since been renamed to "Applied Research Scientist".

Like jobs with "trust" in their titles, openings for jobs with "privacy" in theirs saw a marked jump last summer. From June to September, openings soared from 13 to 45. A spike in "trust" openings appears to be underway now, with 39 such openings compared to 28 in January 2019.

If bringing in professionals with expertise in building trust and ensuring users' privacy is important, so is ensuring the security of data. This is one of the more common keywords in this study, with 69 openings in July becoming as many as 155 last fall. The "security" hiring effort remains strong with 106 such openings at last check. A more common — and obvious — title here is "Security Engineer - Online Safety, Security" that seeks an engineer to "help keep [Facebook] users safe from real world threats". 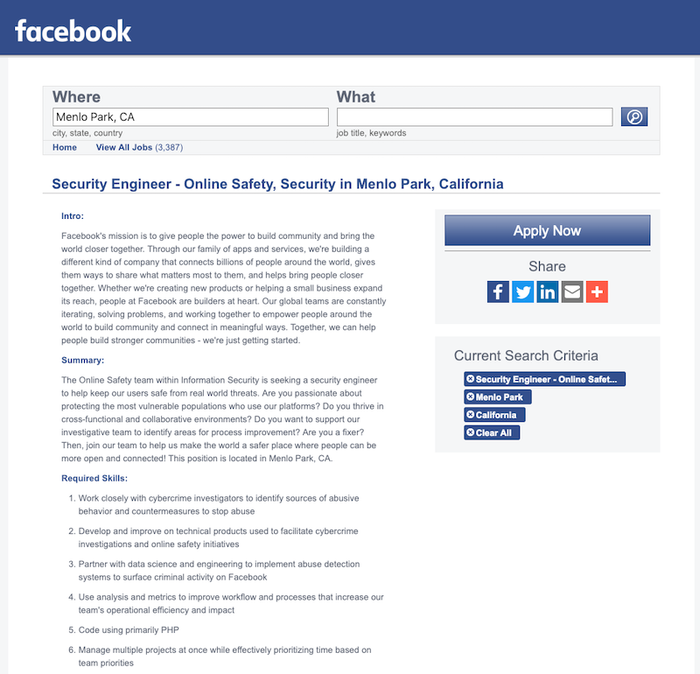