Facebook hiring skyrockets with a focus on Oculus VR

If you were wondering what Facebook was doing with its acquired Oculus VR technology - aside from releasing more headsets - we couldn't tell you exactly. But we can tell you that the company is investing heavily in VR talent.

After announcing plans to "get a billion people in virtual reality" along with talk of virtual venues filled with spectators, it appears the company is making good on those promises, at least if hiring data tells us anything.

There are many ways to look at a company’s health and intentions - revenue, profit, stock price - but here at Thinknum we love looking at hiring trends as indicators of companies that invest in talent.

A look at Facebook’s job listing data since May 2016 shows a steep rise, with only a few very minor periods of stall.

Of course, this shouldn’t be too surprising: Facebook is one of the world’s most successful companies with its hands not just in the world’s largest social network, but also media and advertising, VR, software, cloud, and now blockchain technology (just to name a few).

To better understand the roles Facebook is hiring, we took a snapshot of the most recent listings, at Facebook’s historic apex - so far - of a healthy (for Facebook at least) 2,931 openings.

The largest category comes under its Oculus VR division, with 303 openings. This is followed by Software Engineering and Community Operations. The top-10 categories are shown here. 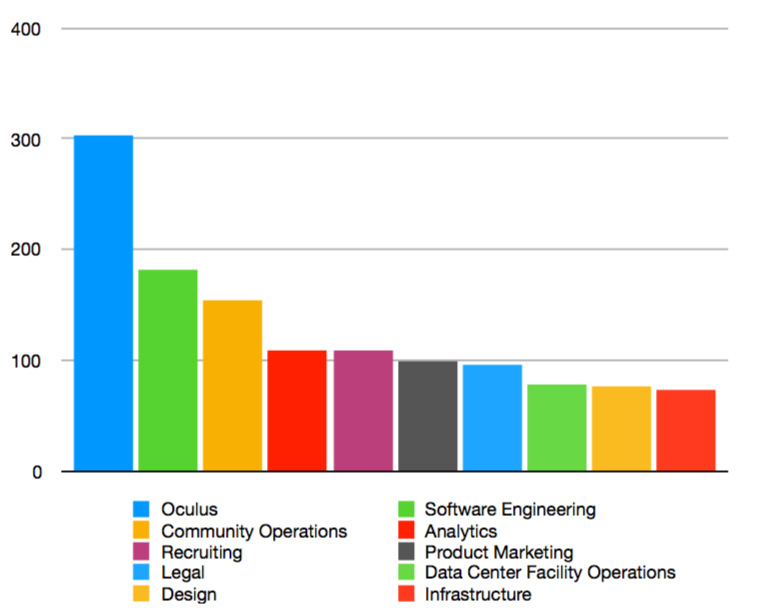 When we isolate Oculus openings over time, the graph's vector change is even more pronounced:

Investors who were worried that Facebook wasn't still bullish on VR can rest easy, at least until the company finally reveals its long-term plans in the space. Or venues?