The ambitious, bold and hungry start their week with The Business of Business!
People
6.8.18   9:47 PM People

Facebook hiring data indicates that it's done with editorial news

Facebook will be shuttering its "Trending" news feature, and hiring for any editorial news positions has all but dried up.

As news organizations try to get their heads around Facebook's news plans and strategy, most recently with reports of Facebook hiring temporary workers to help the company police the credibility of its news feed, we at Thinknum prefer to look hiring activity over time — both quantitatively and qualitatively — as a way to understand a company's strategic intent.

Of course, temporary positions meant to help the company police content is interesting, but what's more interesting is where the company is investing in terms of full-time, Facebook team members.

The below graph shows hires at Facebook with the term "News" in them:

As you can see, hiring for "News" positions was on a steep uptick this spring, peaking on April 12. While that may be interesting on its own, it's important to be able to look at what those positions were for.

On that date, there were 28 open positions in "News" - the highest it's ever been. But of those jobs, 7 were categorized as "Partnerships, Media" followed by "Product Marketing".

As is now widely known, Facebook plans to scrap its "Trending" news section altogether. So when we look at the 15 open "News" positions from today, we see something similar, but smaller:

Meanwhile, of those jobs, two are out of the country: One in Singapore, and another in Mexico City. In fact, of all the remaining "News" jobs at Facebook, not one is dedicated toward actual editorial news content or its integrity. Most are for video and broadcast news development, design, or engineering.

One job, however, called "Public Policy Manager, Content Standards & Practices, News" is interesting in this context. Its main responsibilities include the following:

"Facebook is looking for a Content Standards & Practices Manager for our Watch product to review a variety of News and Entertainment programs at all stages of production and editing. The focus of this role is to ensure programming compliance with our Standards & Practices, as well as Facebook's Community Standards. The candidate will collaborate proactively with both original content producers and Facebook's own News Partnerships Team." 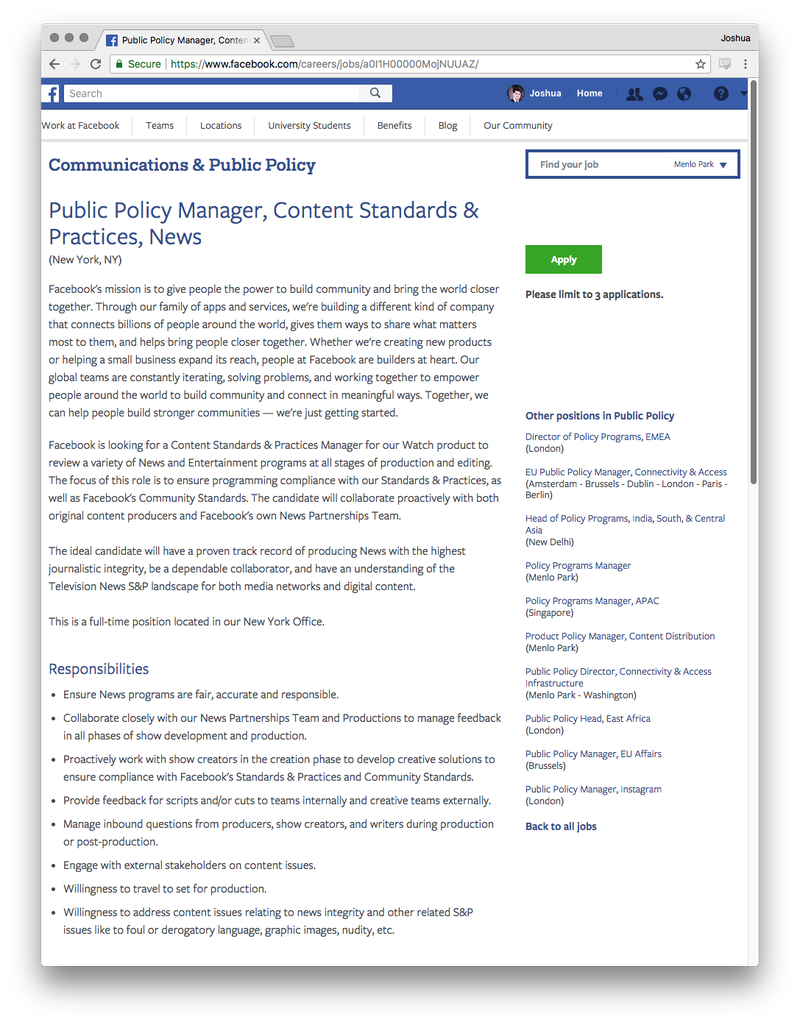 As you can see, that's a quality check position for Facebook's Watch video product and doesn't appear to have anything to do with scouting editorial news.

That all said, Facebook hiring activity for legal, policy, and communications positions to begin policing and responding to the Facebook community for user-generated content is on the rise, as we have shown in the past.

It seems that Facebook's intent to recuse itself from any content influence is real, at least when it comes to editorial news.