The ambitious, bold and hungry start their week with The Business of Business!
Markets
5.16.18   8:08 PM Markets

Fast fashion, in the form of Forever 21, Uniqlo, H&M, and others is a massive industry. Here's how big it is, why it's so successful, and the challenges it brings - and faces.

The other day, I was tearing my bedroom apart looking for a black t-shirt. But not just any black t-shirt — I needed the one I wear with my camouflage print leggings and army jacket. It's a very specific, V-neck, looser fitting top I got for $8 at H&M. That black t-shirt is one of about 12 that I own from places like Forever 21, Zara, The Gap, Target, Uniqlo, and H&M. And the thing is, I don’t even think having 12 black t shirts is odd. After all, how can it be odd when the most expensive one cost just $17?

“My grandmother has only one shirt in her wardrobe. My mother has three. My daughter’s generation, 50. And 4% of them, she never wears.” - Jack Ma, founder of Alibaba and one of the richest men in the world. 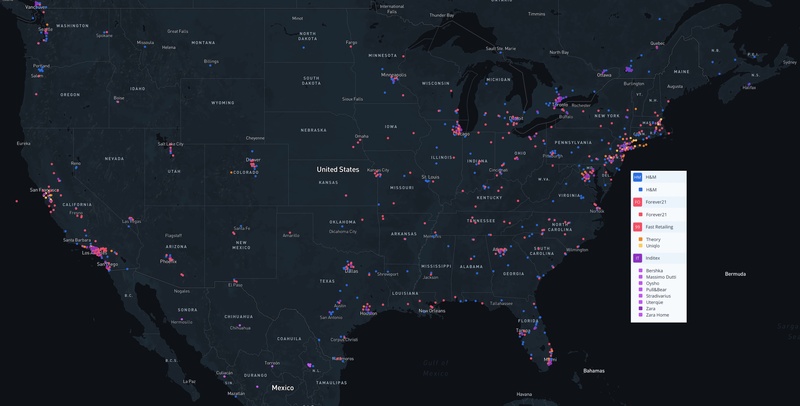 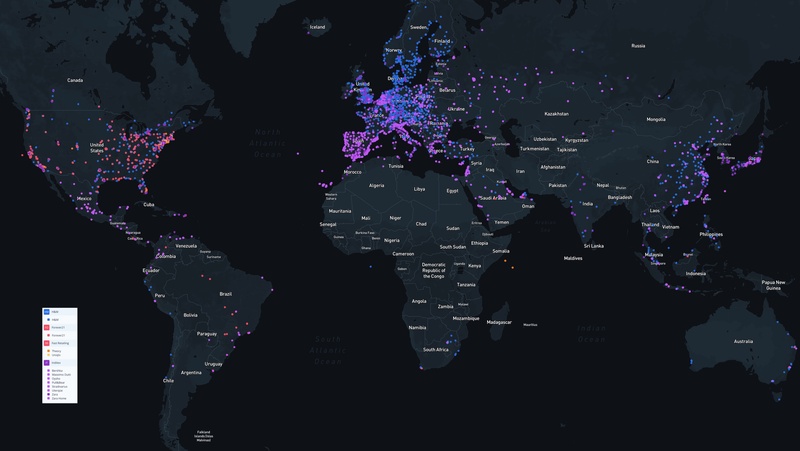 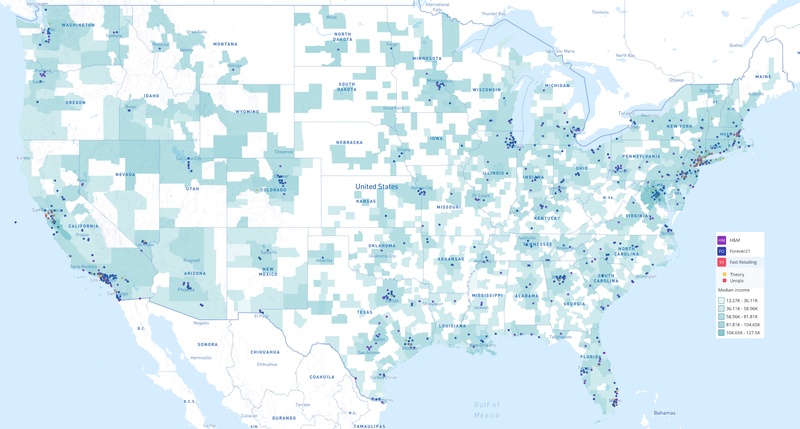 "Fast fashion", that is, clothing that moves quickly through the production process and sells cheaply, is big business. It has appeal in that finding a trendy item of clothing at a low cost triggers dopamine receptors in the brain. The low price makes it relatively guilt-free to purchase, similar to the treasure hunt appeal of stores like Ross and TJ Maxx. Finding bargains makes people happy…temporarily. However, for as much appeal as there is to fast fashion there are a number of complicated issues in this industry as well.

The Appeal Of Fast Fashion

The proliferation of inexpensive, fashionable clothing has made shopping a cheap and endlessly available pastime. Stores like Forever 21, H&M and Zara deliver new shipments to their stores multiple times a week as a rule, giving shoppers virtually endless inventory to pore over.

There’s even a neurological reason for why some people get so excited over shopping. In 2007, researchers from Stanford, MIT, and Carnegie Mellon used fMRI technology to look at the brains of test subjects while they were out shopping and making decisions about buying clothes. When one of the subjects saw something she or he wanted that was for sale, the brain’s pleasure center lit up. The more that person wanted that item, the more the fMRI reflected activity. When they showed the subject that the item had a low price, similar brain activity appeared. In short, the act of looking and getting a bargain caused the biggest release of happiness in the subjects’ brains.

Fast fashion feeds this neurological process perfectly. The clothing is irrationally cheap, so it is rational to buy. Stores get new deliveries frequently. Zara gets two shipments of new clothes each week. H&M and Forever 21 get new shipments of clothes daily. Customers always have something new to look at and buy.

Additionally, Zara, H&M, Forever 21, and other fast-fashion retailers are infamous for knocking off high-end designers. This allows their customers to get the look of the moment at a fraction of the price.

The inexpensive items mean that customers buy things they don’t really need without much thought. A $27 dress? A $9.95 sweater? No problem! 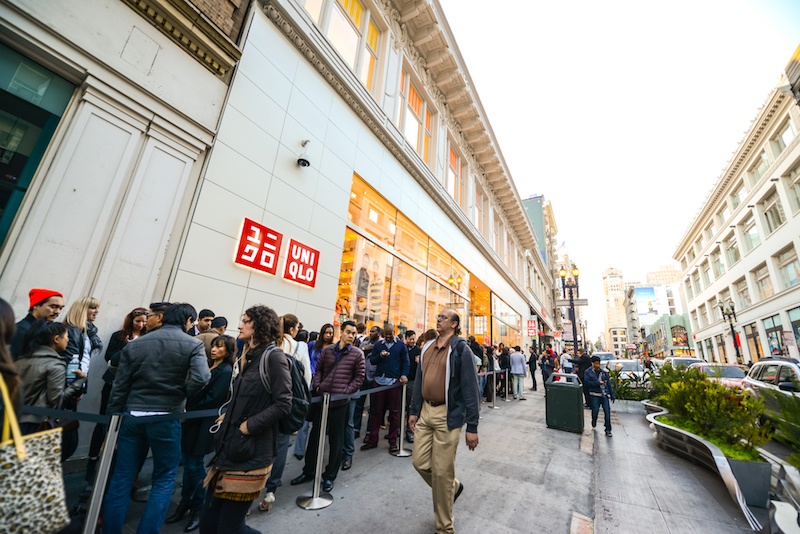 People lined up to get in to Uniqlo, San Francisco. Credit: iStock

For fast fashion businesses to turn a profit with such inexpensive prices, they have to sell a ton of it. And that’s exactly what they do. Fast-fashion brands keep their prices low by relying on streamlined supply chains and incredibly quick implementation processes. For instance, Zara is able to create a new design and have the finished product shipped to every single one of the chain’s 2,200 stores in 93 countries in just two weeks. H&M and Forever 21 are just as efficient. This gives the fast-fashion brands an edge that traditional stores will never be able to duplicate.

To wit: Zara’s co-founder Amancio Ortega is the 6th wealthiest man in the world. The richest person in Sweden is H&M chairman Stefan Persson.  Forever 21’s Jin Sook and Do Won Chang has a personal fortune of $5.9 billion.

Fast fashion is sold cheaply, so the brands have make it cheaply in order to turn a profit. Many countries don’t have the kind of labor laws that the U.S. does and often even the laws they have aren’t enforced.

Fast-fashion brands, particularly Forever 21, hire workers in a sweatshop environment to make their clothing. In the case of Forever 21, lawsuits in this area have been a plenty. In 2001, the Asian Pacific American Legal Center and the Garment Worker Center filed a lawsuit against Forever 21 on behalf of 19 workers. The lawsuit alleged that Forever 21 participated in unfair business practices and wage violations. Workers from seven different small factories alleged they were working under sweatshop conditions to produce garments for Forever 21. Although the company claimed they had no idea about the working conditions in the factories, it was impossible for Jin Sook and Do Won Chang to claim ignorance. The workers won a $4 million settlement from Forever 21.

That same year, another group of workers launched a national boycott of Forever 21. The boycott lasted for three years and Forever 21 sued them for defamation, causing several of the manufacturers to settle. When a judge ruled in 2004 that the case had merit and could proceed, Forever 21 settled. The terms of the settlement are confidential. A documentary about the lawsuit and boycott, Made in LA, aired on public television and won an Emmy in 2008.

It seems like every other month there’s a case in the news about a fast-fashion brand copying an artist or designer’s work a little too closely.  The problem lies in current U.S. copyright law, which only protects original prints and graphics, not the actual designs themselves. This makes these sorts of cases very had to prove, so fast-fashion brands keep doing it.  In other words, loopholes in copyright law allow Forever 21, Zara, and H&M to operate for the most part legally while profiting on the designs of others.

In 2004, Forever 21 debuted new lines and brands designed to appeal to older shoppers. After all, teens only have so much money, but if you can tap into the 25-45 year old demographic, you can sit back and count your cash. These lines looked awfully familiar to a lot of designers and over the next few years, everyone from Diane Von Furstenberg to Anna Sui to Anthropologie (as well as about 47 other labels and designers) sued Forever 21 separately for copying their clothing. The company maintained its earlier claims of ignorance in this new round of litigation, saying that they had to trust their buyers and couldn't possibly police each and every vendor to know how they came up with their designs. Diane Von Furstenberg, Anna Sui, and Anthropologie did win settlements against Forever 21, the details of which are confidential.

In April 2016, Unicolors, a California based company that obtains rights to unique graphic artwork, prints them on fabric, and sells them to fashion brands filed suit against H&M for copyright infringement. Unicolors alleged the H&M copies one of its patterns for a jacket and a skirt. H&M denied ever seeing the design, let alone copying it.

Zara has also stepped on the wrong side of a copyright, literally. Christian Louboutin ‘s shoes are known for having red soles. That is an easily identifiable thing that can be trademarked. Despite this, Louboutin lost a 2012 lawsuit against Zara. The fast fashion brand made a shoe that had a red sole that sold for far less than the $700 average price of a pair of Christian Louboutins. The court ruled that Louboutin’s trademark was too vague. Had he specified a Pantone number for his color red, the lawsuit may have gone his way. 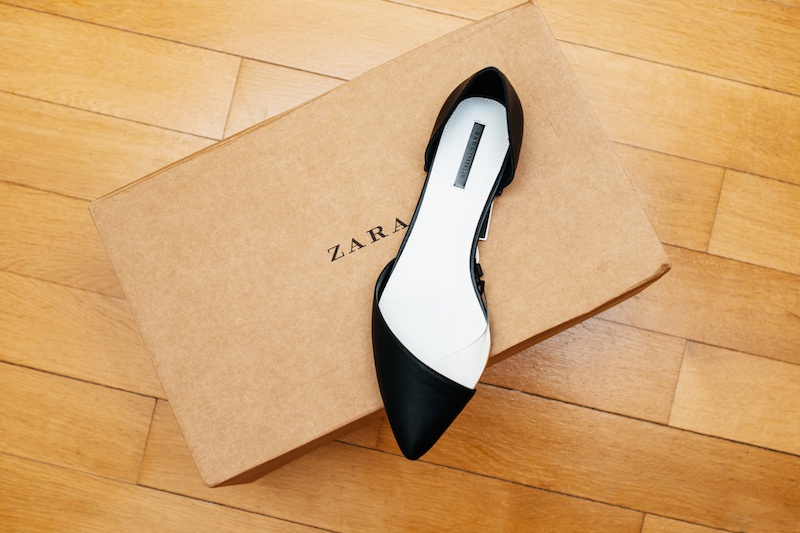 It is integral to fast fashion brands’ success that customers are able to find the latest fashions they've seen on their favorite celebrity for cheaper. A jacket worn by Taylor Swift by designer Rick Owens may retail for $2,675, but the knockoff at H&M is just $37.80. Sure, the fast fashion version may literally disintegrate after a handful of wearings, but to the typical consumer, that jacket served its purpose. Fast-fashion customers understand they are not getting the highest quality, but in fashion, often getting the look that you want is the most important thing. And that’s why they keep showing up, buying clothing, and helping these brands grow.