Esports continues its break into the mainstream with Esports Arena, a joint venture from three Chinese video game companies, getting floor space inside the largest retailer in America.

On November 4, tens of thousands of people packed the Incheon Munhak Stadium in South Korea to watch the 2018 League of Legends World Championship, an esports event where the best League of Legends players in the world compete for millions of dolalrs in prize money. Around the world, over 200 million people tuned in online — mostly through Chinese streaming website Panda.tv — to see Chinese-owned Invictus Gaming bring home China's first-ever Summoner’s Cup, the League of Legends equivalent of the Lombardi Trophy.

This year also had more esport competitions broadcasted on mainstream channels, such as ESPN, as well as more frequent investments from traditional sports ownership groups, such as AXiomatic Gaming, the company that owns the widely known Team Liquid, who received funding from Michael Jordan and Magic Johnson. And, as of November 2, it has taken another major step into the mainstream thanks to a partnership between with megachain Walmart ($WMT).

Esports Arena announced that it will operate five locations inside Walmart stores. Three of them are in operation at Walmart Superstores in Roseville, California, Colorado Springs, Colorado and Spokane, Washington. The two other arenas have yet to be revealed.

While Esports Arena is only in less than 1% of all American Walmart Superstore locations (3,554 per our database), the deal effectively puts their foot in the door of the largest brick-and-mortar retailer in the country. As we covered previously, Walmart has a massive presence compared to its competitors such as Target ($TGT), and superstore locations have, on average, 179,000 square feet to play around with. 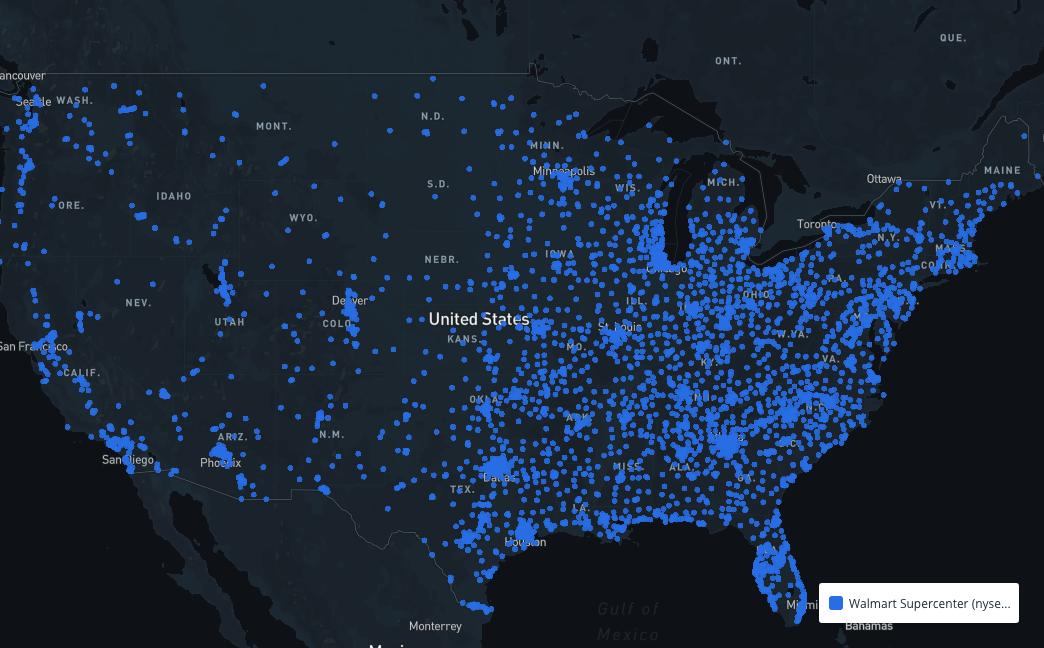 Although there are only 25 gaming stations in these Walmart arenas, they are networked to other Esport Arena locations, allowing for larger tournaments and potential prize pools. Furthermore, these superstore locations are spread across rural locations where traditional competition sites, or even professional sports teams, are few and far between.

Essentially, this deal could potentially bring an esports experience to parts of the country where large tournaments are few and far between. In other words, while massive events in Los Angeles and Texas are taking place, up-and-coming amateurs or enthusiasts could play in tournaments in Williston, North Dakota and Sheridan, Wyoming, should Esports Arenas and Walmart mutually decide on an expansion.

Founded in 2015 by Paul Ward and Tyler Enderes, the Esports Arena started as single location in Santa Ana, California before it rapidly expanded to Oakland and Las Vegas, where it has residency at the Luxor Casino. It is part of Allied Esports Property Network, a joint venture between Chinese gaming companies Ourgame International, KongZhong and iRena.

With esports' rapid rise to prominence and an initial five store investment, Esports Arenas, and its parent companies, could be primed for massive growth across America should it continue expansion within Walmart.

Author's note: The author of this article previously commentated for an event at the Esports Arena in Santa Ana, Caifornia back in 2017.