The ambitious, bold and hungry start their week with The Business of Business!
Markets
4.26.22   7:35 PM Markets

Elon Musk's Twitter purchase has us all doomscrolling again

Concern about his ownership is rooted in his long, messy track record as the founder and CEO of other businesses.

It is generally not good for a business to be associated with a person who inspires mass dread, much less be owned by one. Tesla CEO Elon Musk often generates this reaction.

The world's richest man has repeatedly said ridiculous things and insulted people on Twitter. Musk’s management of Tesla has helped push electric vehicles into the mainstream, but there have also been numerous reports of safety issues and questionable business practices. He has also repeatedly tried to limit the free speech of employees, journalists, financial analysts, bloggers, and customers.

But now Musk is foisting all that baggage onto Twitter, a platform he has frequently used to promote his interests and shape his personal image. On Monday, news broke that Musk’s $44 billion proposed buyout of Twitter was unanimously approved by the company’s board of directors.

“Free speech is the bedrock of a functioning democracy, and Twitter is the digital town square where matters vital to the future of humanity are debated,” Musk said in a statement.

Many inhabitants of the digital town square were far less than welcoming, however. For instance, NBC News senior reporter Ben Collins tweeted: “There are plenty of models for where this site is likely headed. I'm on those sites all day. I cover extremism and lies for a living. You're not gonna like it.” 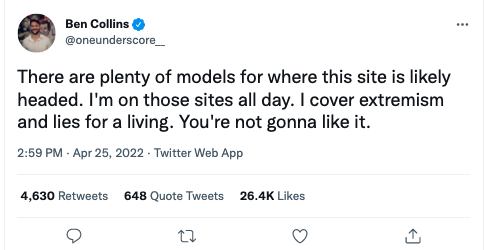 Comedian Lee Camp chimed in by tweeting:  “Let’s hope [Musk] treat [Twitter] far better than he treats his workers, or the environment, or the animals he’s implanting with neuralink, or the countries he supports coup’ing, or anyone who gets in his way.” 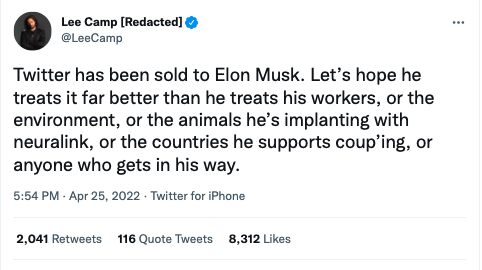 University of Texas-Austin journalism professor John Schwartz meanwhile grumbled: “All this time I’ve been saying Twitter was broken, I hadn’t really thought of how much worse it could get.” 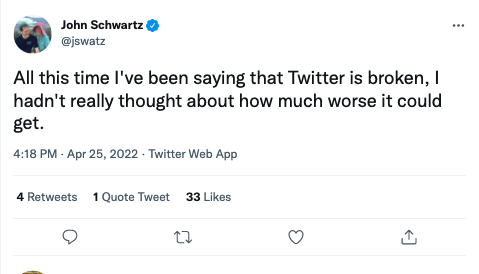 Twitter has for years been dogged by complaints from users about widespread harassment, hate speech, misinformation, and bots. To top it off, controversial, insulting and racist comments from former President Donald Trump on Twitter made the digital atmosphere even less pleasant for many users. But it was Musk’s purchase of Twitter which seemed to finally prompt a truly existential moment, including mass musings about leaving the platform, which has become almost mandatory for anyone with a public profile. 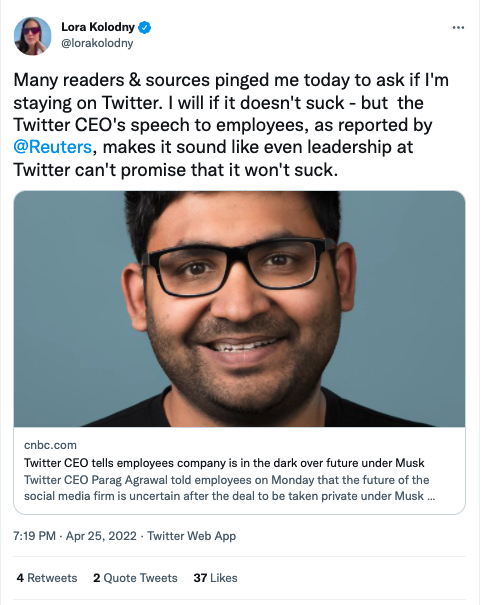 There was a similar mood among some Twitter employees, according to Talmon Joseph Smith, an economics reporter at The New York Times. 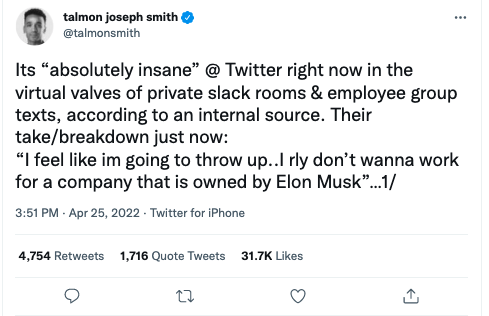 Early reports from an all-hands meeting at Twitter about the new ownership under Musk also indicated a pretty high level of uncertainty about the billionaire’s plans.

A new level of doomscrolling

This brings us to doomscrolling. If you’re unfamiliar with the term, it’s the practice of looking at the internet or social media platforms on cell phones, often late into the night, in search of news updates, key insights, context, or guidance on what to do in response to stressful or bad news.

I helped to popularize the term. For the past two years, I’ve posted nightly reminders on Twitter about the importance of taking screen breaks and going to bed instead of staying up late. My encouragement to avoid “doomscrolling” has struck a chord; I’ve gained 35,000 Twitter followers; done more than 60 interviews with major media publications like the New York Times, WIRED, and Scientific American; and seen the term mentioned on TV programs like The Late Show.

Doomscrolling has become a  genuine phenomenon during the Covid-19 pandemic. Many people are spending a lot more time online reading reports, updates, and analysis about how the virus keeps changing the way people live, work, and travel. In the past two years, there were additional spikes in doomscrolling during the US national election in 2020, the January 6 insurrection at the U.S. Capitol, and Russia’s invasion of Ukraine on Feb. 24. 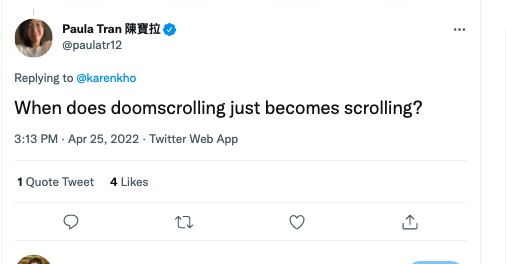 As a result of the war, doomscrolling ramped up even more in response to the massive stream of news updates, propaganda, conspiracy theories, analysis, commentary, business implications, as well as the calls to support the millions of new refugees.

There are significant negative costs to all of this doomscrolling. Research has shown this additional time online is negatively affecting mental health, well-being, sleep and overall productivity. The U.S. Surgeon General Dr. Vivek Murthy is also concerned about it.

So where’s all this fear and doomscrolling about Musk’s takeover of Twitter coming from? It’s worth taking a look at the pro’s and cons of the deal and possible implications. From a business perspective, it is good that existing shareholders of Twitter are being paid $54.20 a share, a 38% increase over its closing price of $39.31 on April 1.

But it’s bad that Republicans are celebrating the deal and raising the possibility that Twitter will reinstate Trump’s account, which was suspended following the Capitol riots over concerns he had encouraged the insurrection.

It’s also worth noting that Musk comes to Twitter with a track record of alarm-raising practices at his other companies, Those include Tesla issues like alleged fraud, environmental violations, hundreds of manufacturing injuries, horrific harassment and racial discrimination, cars bursting into flames, as well as its automous features failing to avoid fatal crashes.

And finally, it’s not encouraging that Musk makes scientifically impossible assertions like “underground tunnels are immune to surface weather conditions” in reference to his Boring Company’s Hyperloop transportation concept, even though several subway systems including New York’s, have often flooded after heavy rain.

On a fundamental level, most people want to support businesses and companies that don’t make the world worse. The argument from CNN media correspondent Brian Stelter that "no one knows" what Twitter’s future will be like under Musk’s ownership fails to recognize how often businesses hire executives based on their existing leadership values and past performances. Based on what  Musk has already done, or is accused of doing, that’s more than enough to keep doomscrolling about.