The ambitious, bold and hungry start their week with The Business of Business!
People
4.2.21   8:00 PM People

Elon Musk was forced to delete some controversial tweets. Meanwhile, Volkswagen got into controversy of its own when it jumped the gun on its April Fool’s Day name change to “Voltswagen.”

This week: Elon Musk says Tesla could be the biggest company in the world (then deletes the tweet), Volkswagen is the butt of the joke on April Fool’s Day, and Coinbase announces when it’s going public.

Here’s everything you may have missed from this week.

Whole Mars Catalog, a Twitter account that frequently praises Tesla and Elon Musk, tweeted that “Tesla is going to be bigger than Apple,” then tagged Musk. Musk replied in his characteristically cryptic style, saying “I think there is a >0% chance Tesla could be the biggest company.” Although it’s unclear why, Musk deleted the tweet not long after posting it.

Although Tesla and Apple aren’t direct competitors, they might be soon. Apple is planning on selling its own self-driving vehicle by 2024. Apple’s team for the project includes Doug Field, a former Tesla employee.

Musk’s tweets have landed him in hot water countless times. In fact, Musk was forced to delete a different tweet last week, one he wrote in 2018. 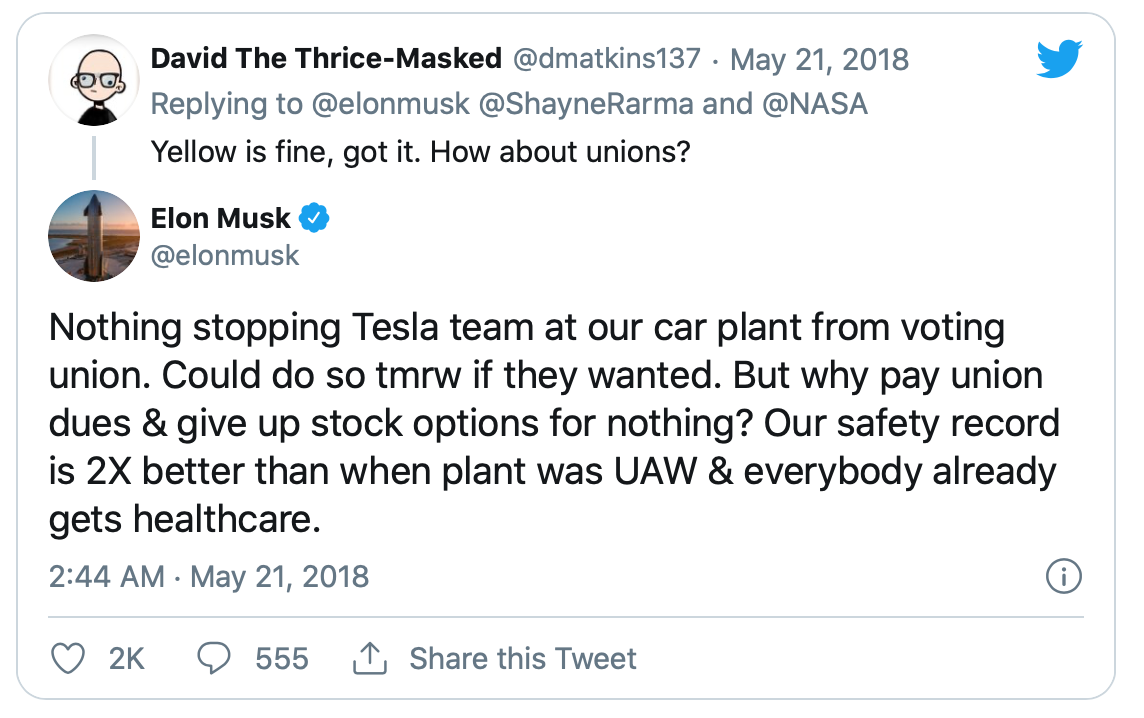 The tweet in question was about Tesla and unions, and Musk was clearly anti-union. The National Labor Relations Board ruled on March 25 that Tesla repeatedly violated labor laws, and that Musk had to remove a tweet that "unlawfully threatened" workers who wanted to unionize.

We know, 66 is an unusual age to change your name, but we’ve always been young at heart. Introducing Voltswagen. Similar to Volkswagen, but with a renewed focus on electric driving. Starting with our all-new, all-electric SUV the ID.4 - available today. #Voltswagen #ID4 pic.twitter.com/pKQKlZDCQ7

In one of the biggest April Fool’s blunders in recent memory, Volkswagen announced a surprise name change that turned out to be a joke. According to the company, “Voltswagen” would be the new name, to better put a “renewed focus on electric driving.”

While the stunt would have been met with a chuckle if it came on April Fool’s Day, it instead came on March 30, two days early. Naturally, the media took it seriously, especially because the company explicitly said it wasn’t a joke. That is, until the next day, when the company came clean.

What began as an April Fool’s effort got the whole world buzzing. Turns out people are as passionate about our heritage as they are about our electric future. So whether it’s Voltswagen or Volkswagen, people talking about electric driving and our ID.4 can only be a good thing. pic.twitter.com/Rzx8mJgxkT

Naturally, people weren’t pleased that they’d been fooled — especially the journalists who reported the news.

Journos: THEY LIED TO US. THIS IS CRAVEN. THIS IS LYING, AND LYING IS WRONG. WHAT A FACE PLANT. THEY LOST OUR TRUST. PURPOSELY HOODWINKED! WE SHOULD NAME NAMES! pic.twitter.com/UbUmo4VamI

you know, if I were a company famous for lying to regulators about emissions, I would avoid April Fools entirely https://t.co/ghZkaC7aYG

We’re happy to announce that earlier today, the SEC declared our S-1 registration statement effective and that we expect our direct listing to occur on April 14, 2021, with our Class A common stock trading on the @NASDAQ under the ticker symbol COIN.https://t.co/cwRZWmj9Pv

On Thursday, cryptocurrency exchange Coinbase announced it would go public via direct listing on April 14. The company will also release its Q1 earnings results on April 6, just eight days before going public.

Coinbase has been riding a wave of crypto enthusiasm in recent months, coupled with the price of Bitcoin reaching all time highs this year. It’s S-1 filing revealed that it brought in over $1.2 billion in revenue and $322 million in profit last year.

Coinbase is currently valued at $104 billion, a figure that some analysts say is too high. Meanwhile, shares in the company reached $343 in the secondary market. Both numbers are likely to change once Q1 earnings are released.