The ambitious, bold and hungry start their week with The Business of Business!
Markets
9.26.18   2:05 PM Markets

Initially a staple of the northeast, Dunkin' Donuts (now Dunkin') plans to open another 1,000 new locations by 2020. Here's where it currently operates.

This week, Dunkin' Donuts ($DNKN) announced that it would officially change its name to just "Dunkin.'" Founded in 1950 in Quincy, Massachusetts, the doughnut chain now has 11,000 shops worldwide and 9,200 in the United States.

It should come as no surprise to East-Coasters that the majority of Dunkin' locations are on the east coast. But the chain has been growing as of late, with locations not just in the midwest, but on the west coast as well. CEO Dave Hoffman, who took over in July, 2018, hopes to add another 1,000 new locations outside of the Northeast by the end of 2020.

The map below shows where current Dunkin' shops are located throughout the United States (click for a larger version).

In terms of location strategy, we can parse a few key data points. First, when it comes to income levels for the areas Dunkin' serves, the average for all locations is $63,000, according to 2016 Census data based on Standard CBSA (core-based statistical area).

The lowest-income Dunkin' serves Laurinburg, North Carolina with an average median income of $30,000. Laurinburg has a population of just 15,962. The per capita income of the city is just $16,165 and 23.6% of the population is below the poverty line.

On the high-income side of Dunkin's store footprint are several cities near the nation's capital, including The District of Columbia itself, with an average median income of $94,000. The District claims a population of 693,972 people, 90% of whom have health insurance, the second-highest rate in the US. Per capita income for D.C. is $55,755, which is higher than any of the 50 states.

Cities with the most Dunkin's

If you were to guess which U.S .city claims the most Dunkin' locations, you'd likely mention a New England city such as Boston.

While Bean Town is in the top-10 cities for Dunkin' locations, you'd be wrong if you guessed that it has the most in America. Instead, Chicago wins top honor here with 226 locations, followed by New York with 176.

Interestingly enough, Brooklyn comes in 3rd with 149 locations, and the Bronx claims 92 locations. This could — depending on who you ask — make New York City the mecca for Dunkin' with 417 stores combined between the three boros. 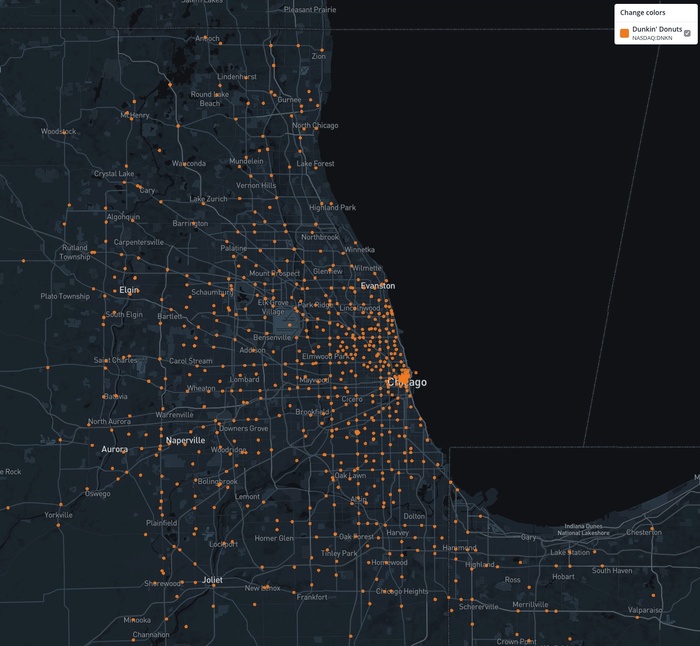