The ambitious, bold and hungry start their week with The Business of Business!
People
5.24.18   2:43 PM People

Trump does most of his political messaging on Twitter, so we looked at how he measures up against other top users on the platform.

Yesterday, a federal judge in Manhattan ruled that President Donald Trump cannot block Twitter users for the political views they express, saying that doing so is unconstitutional and a violation of the First Amendment.

No US president has used Twitter (or any social media platform, for that matter) as a way to message his base as much as Trump has. Trump is known for his early-morning Twitter rants, often followed up by more calculated tweets in the afternoon.

Donald Trump has 52.2 million followers on Twitter. That's 8th in the world, behind accounts belonging to Katy Perry (she's #1), Barack Obama, and Trump's media nemesis CNN. Here's how he fits in the top-10 Twitter accounts:

Among the top-10 Twitter accounts, Donald Trump follows the least number of other people at just 46. This means that when Donald Trump fires up Twitter, he's only seeing the tweets of 46 accounts, include Bill O'Reilly, Tucker Carlson, FOX & friends, Ann Coulter, Sean Hannity, Drudge Report, Sarah Sanders, Geraldo Rivera, many of his family members, and some members of his administration. None of the accounts he follows are top-10 Twitter accounts.

At the other end of the extreme, Barack Obama follows 622,215 people. According to sources at Twitter, this happened during the 2008 Presidential election, when popular accounts used Twitter's "follow back" feature as a social media strategy. But most of those follows remain, which makes visualizing the top-10 following counts a bit difficult, as you can see below.

Donald Trump has the second-most number of tweets among the top-10 accounts with 37,599 tweets. He follows only CNN Breaking News (@cnnbrk) which has tweeted 61,469 times. It's important to note here that @cnnbreak began tweeting more than a year before Trump did, so @realDonaldTrump has ben real busy. YouTube follows Trump with 22,473 tweets. Barack Obama follows in fourth place with 15,512 tweets. 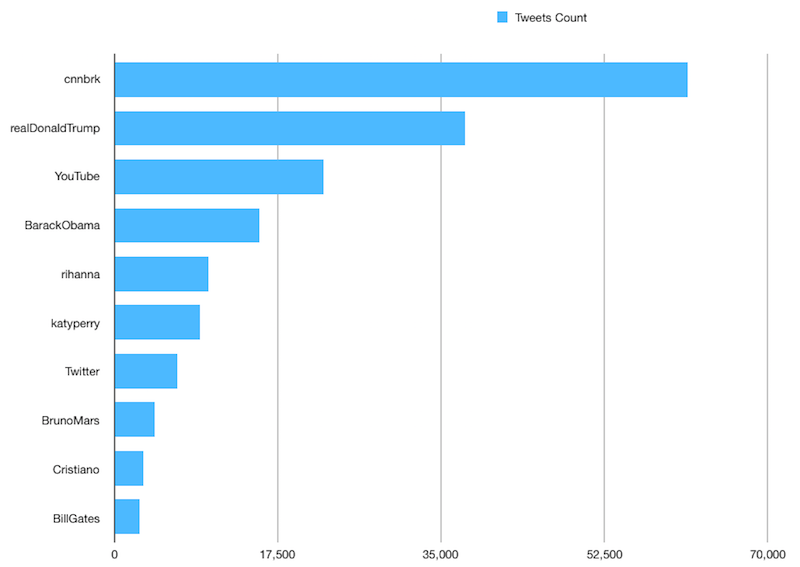 Donald Trump is conservative when it comes to liking other tweets with only 25 such instances. Among the top-10 Twitter accounts, @katyperry has liked the most with 6,185 likes. Trump isn't as conservative as @BarackObama when it comes to liking tweets, however. Obama has only liked 11 tweets while footballer @cristiano (73,179,289 followers) has yet to like a single tweet. 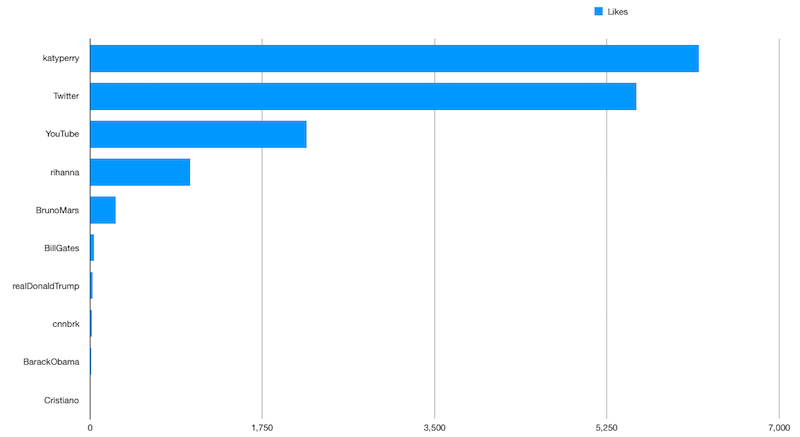 @realDonaldTrump has become known for his Twitter attacks. In fact, he's lashed out against many of the other top-10 Twitter accounts. In 2014, he infamously questioned number-one Twitter account @katyperry about her marriage to comedian Russell Brand:

He's tweeted up at second-place @BarackObama dozens of times:

The end of Indie.vc has come

After surging engagement during the pandemic, Citizen app will now track helicopters

During the pandemic, Citizen introduced an in-app contract tracing tool and a feature that lets users create their own incident alerts. And now, with its fresh round of funding, it wants to track helicopters.
Julia Gray
3.2.21   4:00 PM
Tech

Houseplant has been operational in Canada since 2019, but Rogen's announcement marks the launch of its U.S. operations.
Danny Konstantinovic
3.1.21   5:19 PM
People

The business of dating apps: How do swipes actually make money?

How do dating apps make money? The Business of Business looks into the tricky, booming business of monetizing swipes.
Jael Goldfine
3.1.21   5:15 PM
Innovation
View All