The ambitious, bold and hungry start their week with The Business of Business!
People
4.12.19   3:15 PM People

Disney just announced its streaming service that will disrupt the entire market. Here is how it got here.

Disney ($DIS) has finally unveiled details about its upcoming Disney+ streaming service, causing competitors to start shaking in their boots. That's because the new streaming service, if all goes according to plan, is poised to completely disrupt the young streaming market. Disney plans to launch the service in November 2019, and for just $6.99, it will include titles from Disney, Pixar, Marvel, ESPN, Fox, and others. From a content standpoint, it already looks to be a winner with such a broad range of media on demand.

But before Disney can usurp the reigns of the streaming world, it needs to build a product that will open consumers' wallets. And before it can do that, it needs to hire a team that knows how to build an amazing product.

Job listings that contain the term "Disney+" began showing up on the company's careers site in November, 2018. Specifically, on November 12, 2018, a lone opening for a "Coordinator - Post Production" was listed. This position, focused on Disney original programming, looks at first glance like any other production role. But in its description, it mentions the new role would "interact with other Corporate departments, such as Disney+(new streaming service).

Since then, however, jobs mentioning Disney+ have swelled.

Since that lone listing in November, there have been more than 80 openings that have mentioned Disney+. As of this week hiring for the service remains brisk, with 44 such Disney+ mentions. The most common, or at least in-demand, opening is for software engineers, of which there are at least 6 open head counts at Disney+.

Based on keyword trend analyses, other teams under construction at Disney for the new service includes a "Media Product" team that will be more focused on the actual streaming product along with its build out and distribution on streaming media players like PlayStation 4 and smart TVs.

At the head of this team appears to be a "VP, Media Product" based in San Francisco (or New York), which is also positioned within Disney's "growing Platform Product team".

"Reporting to the VP, Media Product in San Francisco, and part of the rapidly growing Platform Product team, the job location is San Francisco or New York." 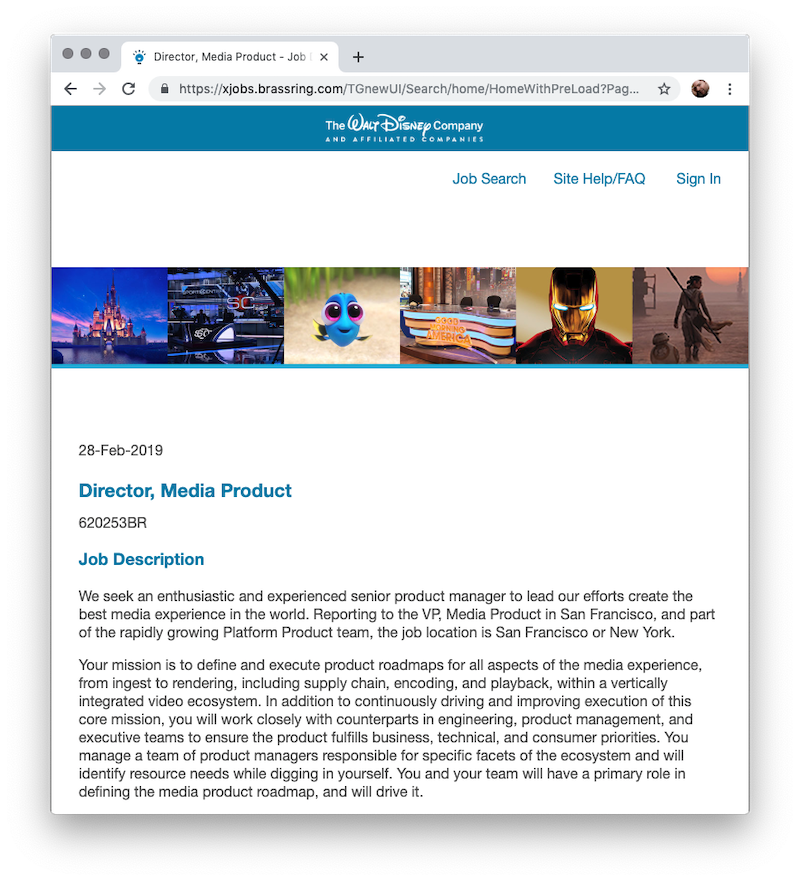 The Disney+ hiring trends seen here are corroborated by overall hiring trends at Disney. Despite growth in hiring for the nascent Disney+ teams, overall hiring at the company has actually slowed since the new year in a possible sign that talent investment at Disney is moving from traditional areas and into new media as it enters a new domain.