The ambitious, bold and hungry start their week with The Business of Business!
Markets
6.15.18   6:27 PM Markets

The Phoenix-based organic grocery clearly has its sights set firmly on Whole Foods, as our Thinknum Data Lab map shows.

If you live in the Northeast, chances are you haven't heard of Phoenix-based Sprouts Farmers Market ($SFM).

If you live in Los Angeles, San Francisco, Phoenic, Dallas, or Atlanta, chances are you've given Sprouts a chance in lieu of Whole Foods ($AMZN).

That's because this growing grocery chain has its sights set firmly on Whole Foods' upscale, organic-loving clientele, and if its surging retail footprint tells us anything, it's already wheatgrass to-its-knees deep in the strategy.

Take a look at the map below (click for larger version). 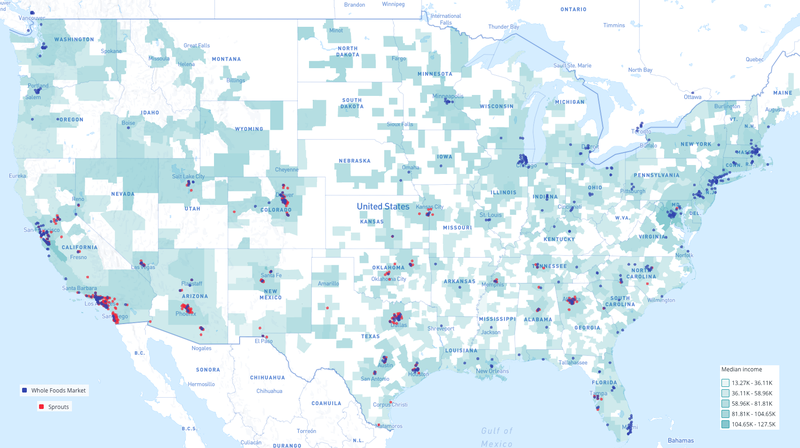 See those red clusters? Those are Sprouts Farmers Markets sprouting up (sorry) around Whole Foods locations like pawns in a long game of chess.

As of now, Sprouts has 303 stores to Whole Foods' 552 (including its newer, more affordable 365 brand). That's not as far off as one might imagine.

From a location standpoint, Sprouts began its journey in the south, with more stores currenrly in San Diego, CA than anywhere else. Meanwhile, Whole Foods has more stores in Chicago than any other city. Here's how each grocery brands' city weightins compare:

So what's left for Sprouts? The north, clearly. In April 2018, Sprouts announced that it would be opening a market in Philadelphia's hip Lincoln Square. It will open on September 5, 2018. And, like a trio of velociraptors triangulating its prey, Sprouts CEO Ted Frumkin also announced that Sprouts would be coming to the other corner of the country in Seattle later this year.

If you think the tri-state area isn't in Sprout's plans, well, we have a bridge to sell you... and it probably leads to Brooklyn.