The ambitious, bold and hungry start their week with The Business of Business!
Features
8.15.19   7:06 PM Features

As thousands of CVS customers threaten to jump ship to Walgreens over reimbursement for birth control, we look at what this could all mean.

On Tuesday, two hashtags were trending and building major momemntum on Twitter related to CVS ($CVS): #BoycottCVS and #CVSDeniesCare. That's because as of today, CVS is reportedly threatening to deny birth control pills to Pill Club members who use the service to help pay for their prescriptions. Backlash against CVS continues to flare as we write this, as consumers make oaths to switch to alternatives like Walgreens ($WBA) to get their prescriptions (and to buy their cosmetics and other household items).

If consumers make good on their decisions to move from CVS to Walgreens, the change will be relatively painless for most. That's because according to a proximity analysis that looked at how close the two chains are location-by-location, every CVS in the United States has, on average, 7.5 Walgreens within 5 miles.

CVS stores in the United States have, on average, 7.5 Walgreens within 5 miles 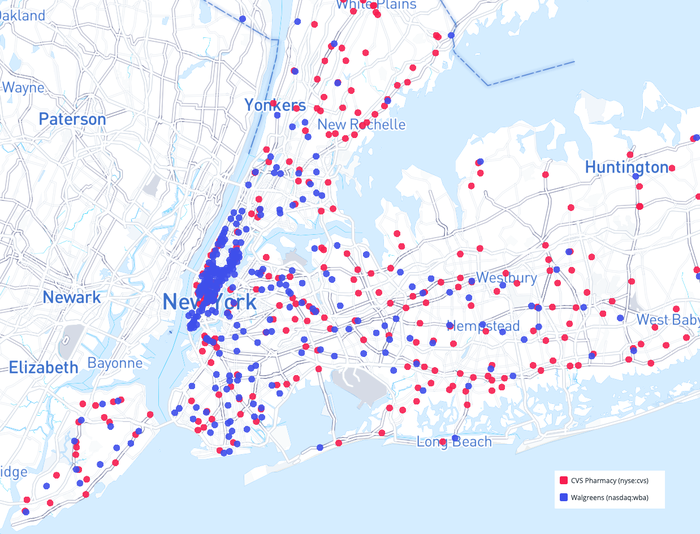 Clearly, it's a bit early to consider what this all might mean for CVS or for Walgreens. The two chains are quite similar in terms of retail outlay and number of stores. Walgreens recently announced it would be closed 200 stores just as CVS disclosed that it would slow its expansion pace, so to future for the two chains apperas to be as uncertain as ever.