The ambitious, bold and hungry start their week with The Business of Business!
Crypto
2.15.22   9:51 PM Crypto

Super PACs backed by the likes of Sam Bankman-Fried, Coinbase and even Anthony Scaramucci are springing up as the crypto industry boosts its political spending to promote favorable regulations.

Candidates in the upcoming midterm election cycle can expect major contributions from the crypto industry. A partially interwoven network of super PACs including GMI, Protect Our Future, Web3 Forward, American Blockchain, and Coinbase Innovation are preparing to spend big to help crypto-friendly candidates win their races. Many are backed by big names and have significant war chests ready to deploy to ensure crypto’s future as regulation ramps up.

While some political action committees are shadowy, GMI does not shy away from taking to Twitter to mobilize support and evoke a sense of urgency by reminding its followers that “Crypto is on the ballot in 2022.” The PAC publicizes the names of its high-profile donors and urges others to join in. Donations are accepted in fiat currency and crypto assets for the convenience of the 27 million American crypto owners whose interests it claims to represent.

So far, GMI has raised $5.3 million from prominent crypto industry players. They include Daniel Matuszewski, the co-founder of the crypto asset investment firm CMS Holdings and Ryan Salame of the cryptocurrency exchange FTX. Both sit on the PAC’s board of directors. Salame’s involvement may explain why the PAC’s crypto donations are processed through the FTX Pay service.

GMI has made a splash, but it has yet to make a campaign contribution. Other crypto-affiliated super PACs, though, including Protect Our Future and Web3 Forward, have begun doling out cash. Those two PACs recently promised to spend $1 million each in support of Texas state Rep. Jasmine Crockett ahead of her upcoming congressional primary race. Both PACs have already purchased media advertising in support of Crockett’s campaign.

Protect Our Future states that its mission is to support candidates “that take a long term view on ​​policy planning.” The PAC says that its main concern is pandemic preparedness, and a spokesperson for Protect Our Future told us that it is "not a crypto-focused PAC and candidate viewpoints on cryptocurrency are not a factor in the PAC’s decision making for endorsements."  However, funding for the PAC was initiated by Sam Bankman-Fried, the founder of FTX. At 29, Bankman-Fried is among the richest crypto entrepreneurs, with an estimated net worth of $24.5 billion.

The super PAC is not Bankman-Fried’s first foray into politics, and he does appear to have interests beyond just the state of crypto. In 2020, he contributed over $5.2 million to Joe Biden’s presidential run. He has since donated to a number of congressional and senate campaigns, supporting both Democratic and Republican candidates. Still, Bankman-Fried is an active voice in the cryptocurrency regulations discourse and has testified about the issue before congress on two separate occasions in the past three months. 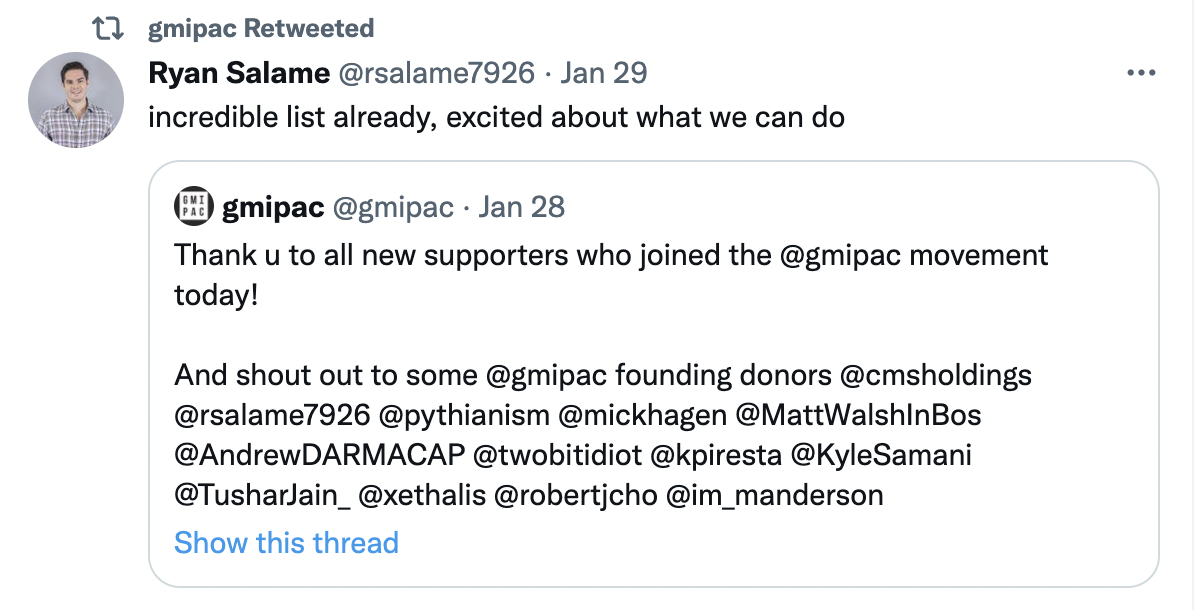 Web3 Forward, meanwhile, has an even more obvious connection to crypto. Its provenance can be traced to GMI, as its FEC filings state that the two groups are affiliated. Its stated aim is to support “democratic candidates committed to making the next generation internet more secure, open, and owned by the users.” The PAC adds patriotic color to its mission by claiming to choose candidates that empower U.S innovators as opposed to overseas ones. In addition to supporting Crocket’s run in the crowded congressional primary, the group has endorsed the re-election campaigns of California Rep. Ro Khanna and Oregon Sen. Ron Wyden.

But not every crypto-focused super PAC has found success in fundraising. The American Blockchain PAC, which has not made a single campaign contribution since its formation in May, has pulled in less than $8,000 according to its latest FEC filings. That puts it far off from its lofty goal of raising $300 million to build a “cavalcade of new congressional candidates who believe in cryptocurrency innovation.”

Super PACs are also not the only way that the crypto industry is making its influence felt in Washington. The industry has also been pouring cash into political lobbying. Cryptocurrency trading platform Coinbase, which launched its own super PAC last week, spent $1.5 million on lobbyists in 2021. Many firms have recruited high profile political consultants onto their staff, including former heads of the agencies that regulate them.

All this political activity has already helped the industry win allies on Capitol Hill, with the Congressional Blockchain Caucus currently numbering at 35 members. With the crypto super PACs going all in on their midterm election spending, this group of crypto-friendly legislators may well expand soon.

This story has been updated to clarify Protect Our Future PAC's position on cryptocurrency.