The ambitious, bold and hungry start their week with The Business of Business!
Markets
7.26.18   2:02 PM Markets

Chick-Fil-A recently announced the launch of a meal kit trial in its native state of Georgia. Here's a look at how and where they are hiring to support the new effort.

Chick-Fil-A ($PRIVATE:PRIV_CHICKFILA) recently announced that it will launch a trial of its brand-new meal kit service called Mealtime Kits across 150 restaurants in its Atlanta, Georgia home area. From Aug. 27 to Nov. 17, Atlanta customers will be invited to bring home one of five meal kits, including Chicken Parmesan and Chicken Enchiladas. Chick-Fil-A says that the kits feed two people, cost $15.89, and require no sign-up free or subscription.

The move signals a new focus on technology and digital marketing, and recent hiring trends at Chick-Fil-A reflect a desire to operate as a technology company to support rapid expansion.

Chick-Fil-A is going about the meal kit program cautiously, however. In a way to test market interest, customers from around the country are being asked to fill out a form expressing interest in trying out the new kits. We reached out to Chick-Fil-A to get a sense of the level of interest in the kits but haven't heard back yet.

Entering into the meal-kit business cautiously is likely warranted for a brand that has remained popular as it's expanded its retail footprint. Consumer interest in meal kits is still a bit of a mystery. In fact, this move comes in the wake of meal-kit startup Chef'd closing its doors last week. Chef'd sold meal kits à la carte sans subscription but was unable to sustain business despite solid investment and meal kits that ran around $30 each.

Chick-Fil-A has a brick-and-mortar backbone made up of chicken sandwiches and nuggets, waffle fries and beloved sauces.

The 150 Chick-Fil-A locations set for Mealtime Kit trials account for just over six percent of the chain's 2,300 plus restaurants. 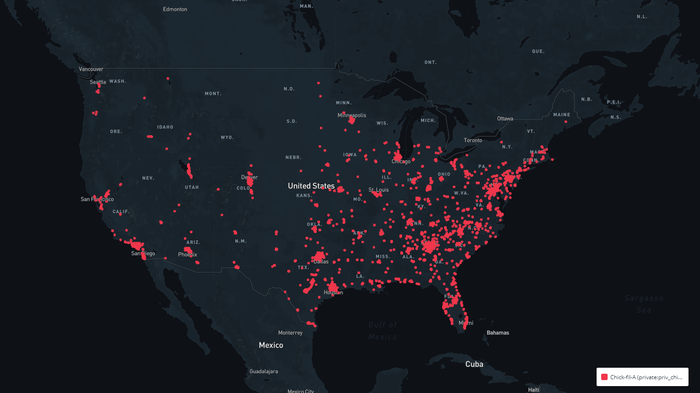 Chick-Fil-A is also a growing empire; across its headquarters in Atlanta and its retail stores, it has seen a steady increase of about 3,000 jobs from the beginning of 2018 to today, according to LinkedIn data.

Chick-Fil-A has had a brief drop-off in hirings for a month, but it is now slowly creeping back up to its baseline level with a renewed focus on Corporate Services and Information Technology.

These new job listings appear to support Chick-Fil-A franchisees with point of sale hardware and software meant to allow for faster ordering, inventory management and, yes, remote ordering for customers from apps for things like meal kits.

Should its meal kit trial be a success and be adopted on a national scale, Chick-Fil-A will have the IT talent to maintain its in-store technology demands and the Chick-Fil-A-One app, one of the three ways that Mealtime Kits customers can order their ready-to-prep meals. And, given that it is the first meal kit in the fast casual industry, its prosperity may also open the door to other popular chains entering the meal kit market.

Imagine, if you will, a build-your-own Shake Shack burger or a Chipotle Mexican Grill kit with everything from fajita vegetables to guacamole.

But for now, we'll just have to get to the drive-thru window or walk in the story to get our fix for fast food and fast casual meals.