The ambitious, bold and hungry start their week with The Business of Business!
Markets
9.17.18   1:53 PM Markets

The most expensive and cheapest cars on cars.com (including an $18 million Buick)

Need to splurge on an expensive set of wheels? Or would take anything with four wheels, an engine, and a steering wheel? These were the top-10 most and least expensive vehicles on Cars.com right now.

Cars.com ($CARS) offers millions of new, used and certified pre-owned vehicles each day on its website. It made $168.5 million in revenue during the second quarter of 2018 thanks to, among other things,19 million monthly unique visitors browsing its inventory. It also handed out an average of $2,064 in revenue to car sellers on its website.

This all makes Cars.com one of the largest online auto dealers in the world alongside Carmax ($KMX).

Cars.com inventory by the numbers

Although the sheer breadth of inventory sold on Cars.com is impressive, we also know that every vehicle has its own story, from being fresh off the factory lot to being used by multiple owners. Some rolled off a flatbed right onto a lot in Springfield, Illinois, while others are ready to be passed along from a father to son in New England. Some owners name their cars, including the very author of this piece (shoutout to Ariel, my Nissan Versa).

With that said, we dug back into the data to look at all the personalities of this inventory, and while owning a car, by some standards, is priceless, one major characteristic of these vehicles is price. For some vehicles, it might as well be priceless, as the most expensive cars on Cars.com cost a few million bucks.

When digging into our data for this story, we found a pretty unfortunate trend. For example, when looking at the priciest vehicles, the list is extremely misleading.

After we were left asking ourselves if we were out of touch with car prices, we did a bit more research and found that the children the listings that were wrong.

Looking at the top listing, a 2018 Buick Encore that is supposedly going for $18,717,680, confirmed that the Cars.com listing was, in fact, for that price. 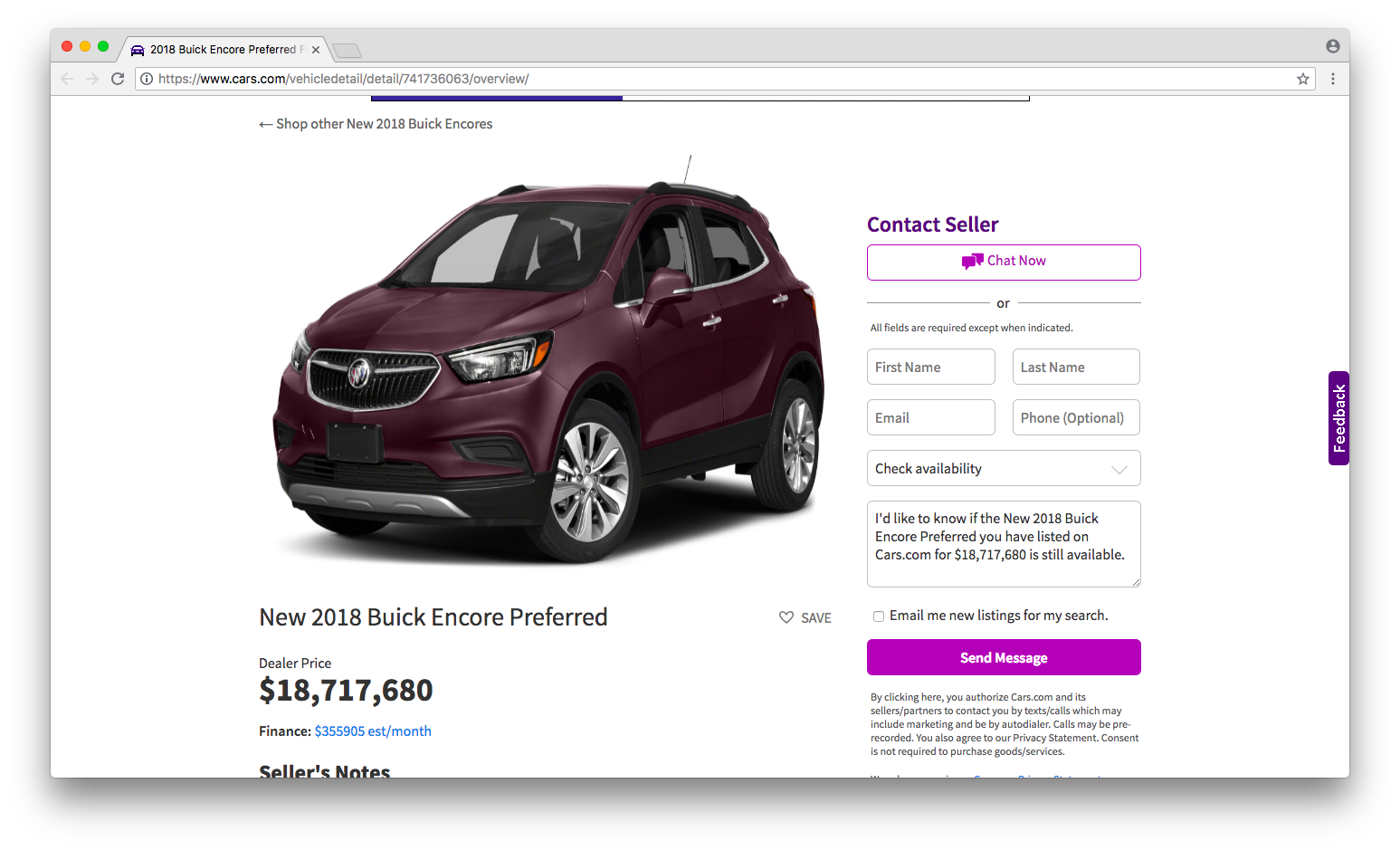 However, when a buyer wants to click on the dealer's website to learn more about the car, its MSRP is $26,000 and is being sold for $18,720. We have no clue why a dealer would mistakenly (or intentionally?) list a car for $18 million rather than $18,000, but that just means we have to dig a little further past these red herrings to find our gems.

Only those who dare, buy a Ferrari on Cars.com

After sifting out the wee cheaters, the data shows that on September 13, Ferrari had the five most expensive cars listed on Cars.com. It also had six out of the ten most expensive vehicles

The most expensive vehicle on that day, a 2014 LaFerrari with 1,551 miles on it, was just sold at the time of publishing. However, a 2015 LaFerrari with less than a tenth of the mileage is being sold out in Beverly Hills. 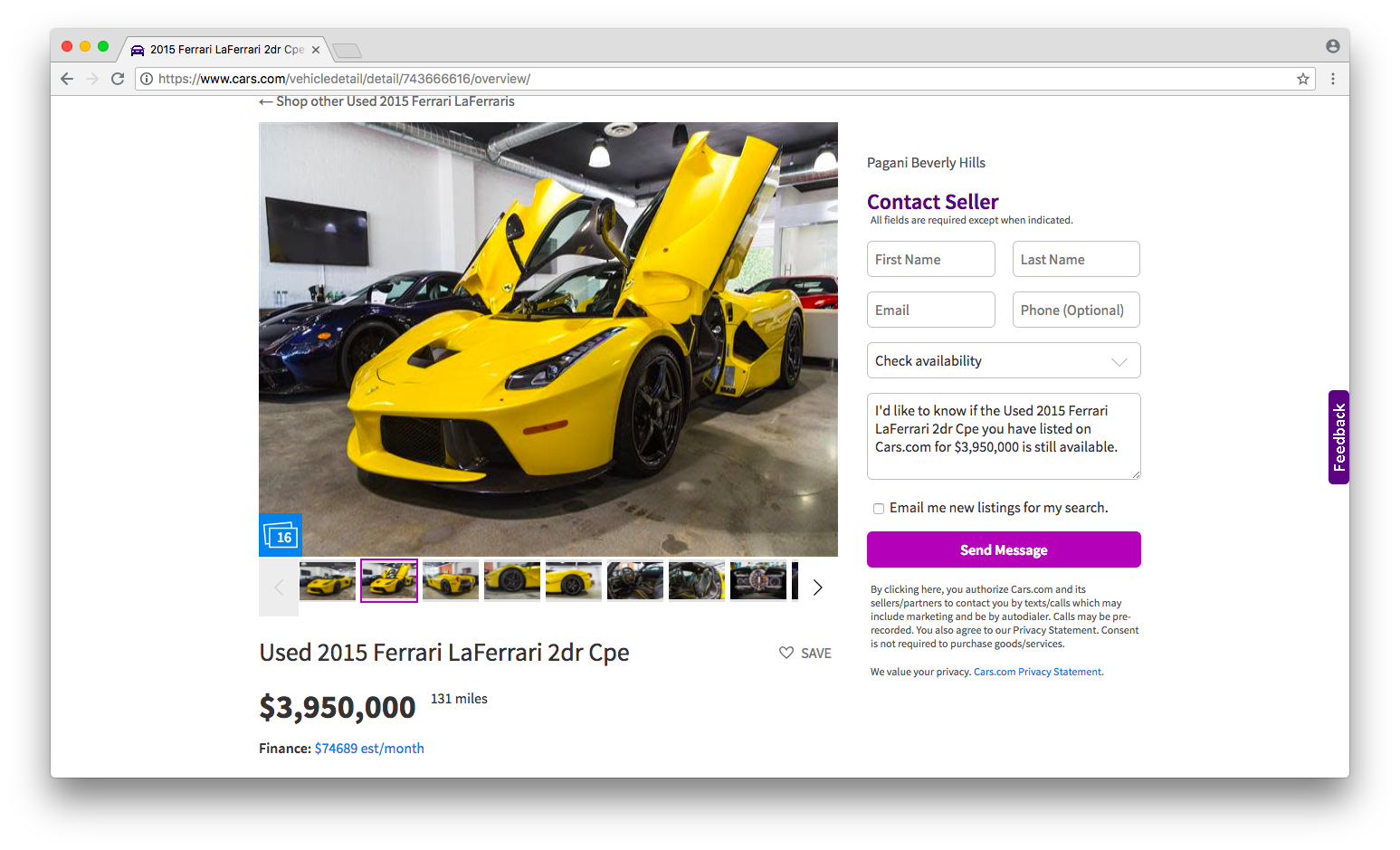 Some other interesting cars in this top-ten are the 2003 Enzo Ferrari, the oldest car on the list, and a limited-run Aston Martin Vulcan, the only new car in the top-ten that also comes as chassis #007. Basically, this makes it the quintessential James Bond car, minus all those gadgets that would definitely make the car illegal to drive. 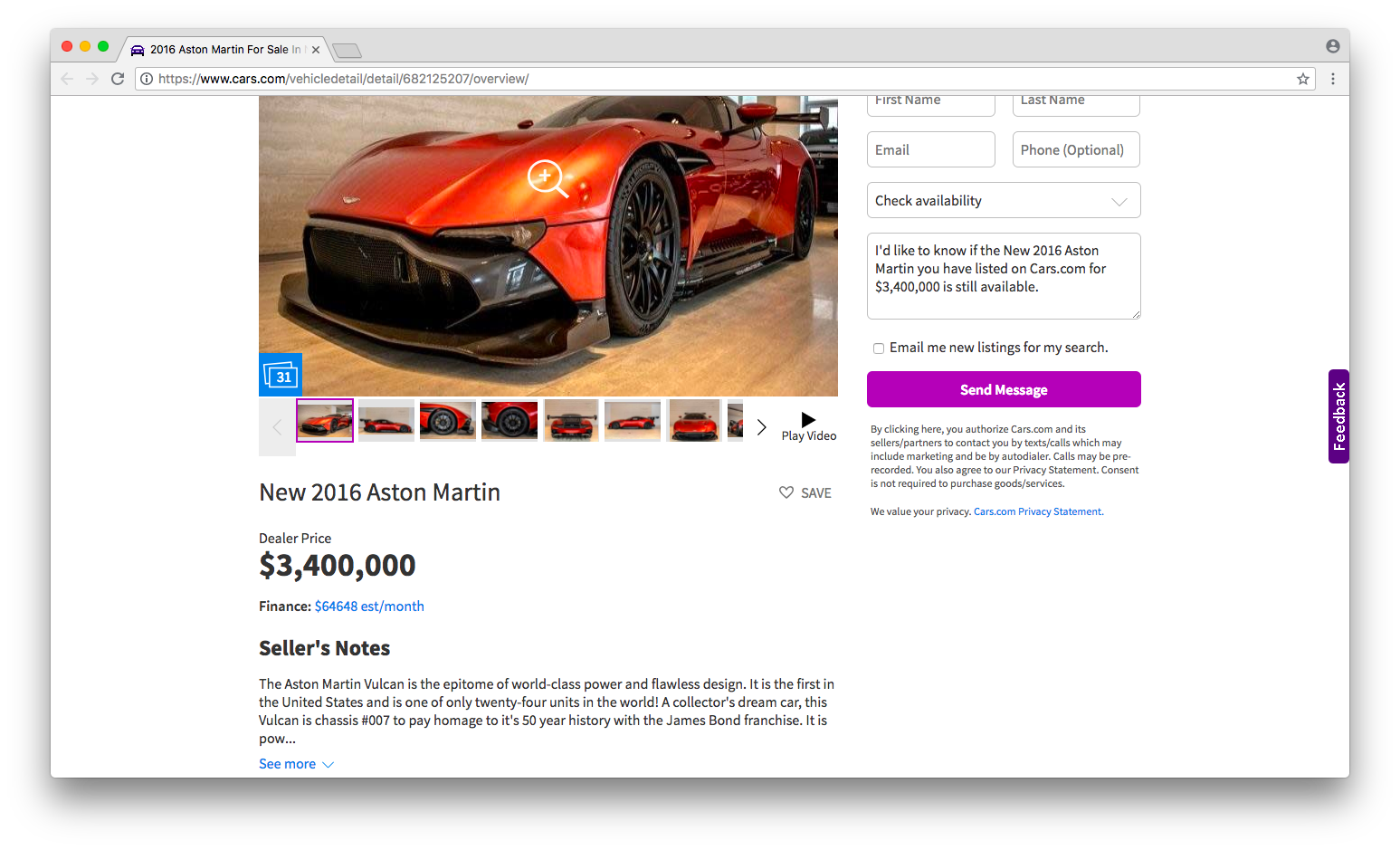 Wait, is this another red herring? As it turns out, this Beemer is quite the opposite. 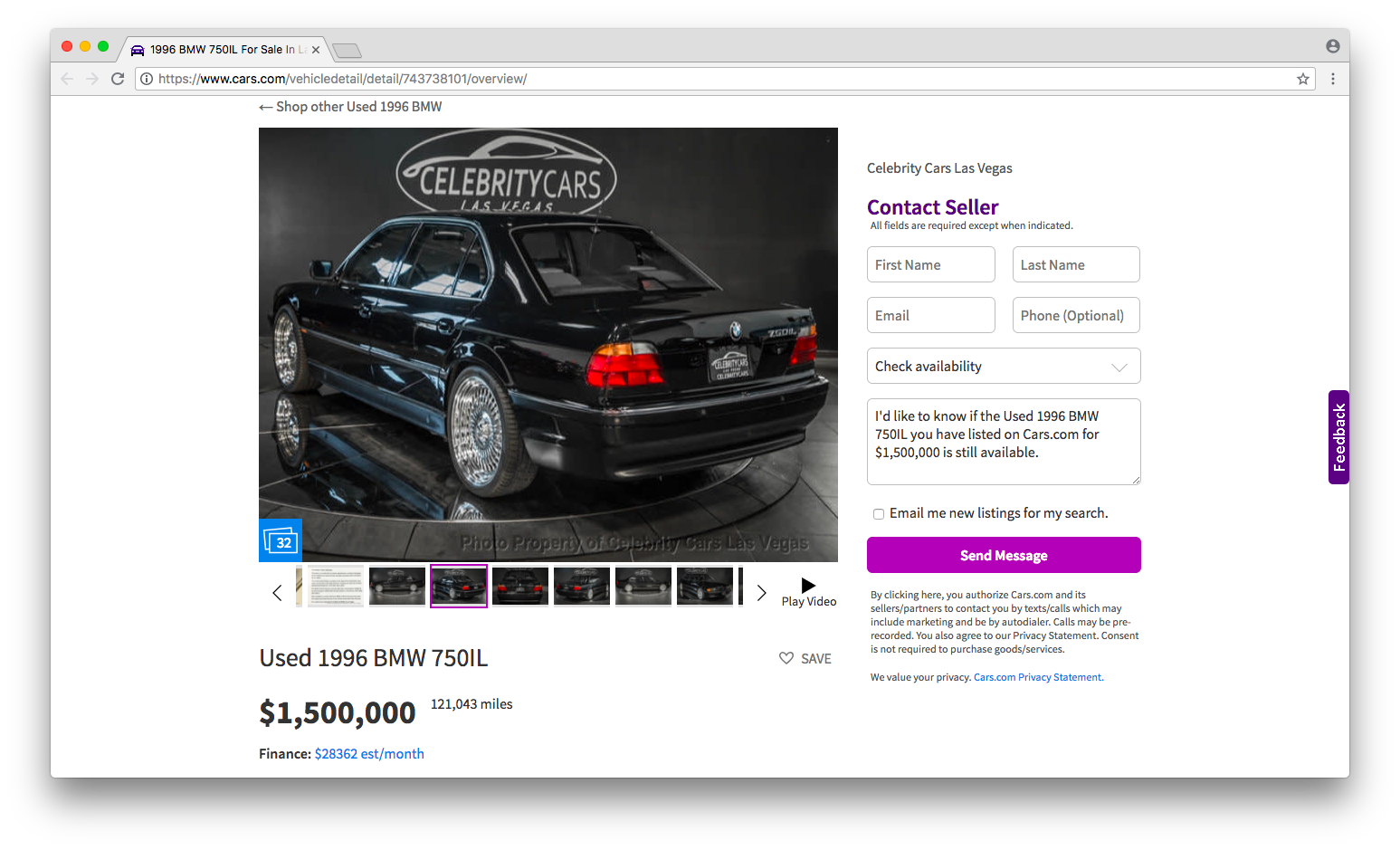 Those familiar with rap history will recognize this car as the exact one Tupac Shakur, the Harlem-native, West Coast raised rapper who helped define the 90's-era of rap, rode —and was shot — in after attending the Bruce Seldon vs. Mike Tyson fight in Las Vegas. It's been fully restored, and it can be yours for $1.5 million.

Have a few hundred bucks? The cheapest vehicles on cars.com

For those with a bank account with less than a few zeroes to say the least, Cars.com also provides plenty of affordable vehicles. However, some of them are a bit too affordable; as in less than the price of a new video game console or tickets to the World Series. Here's what the least-expensive cars are on cars.com, when sorting out those red herring vehicles.

Yes, it's true; for $300 — plus additional listed and unlisted fees, which includes a $99 dealer document registration fee — you can be the owner of a 1996 Chrysler Town and Country. 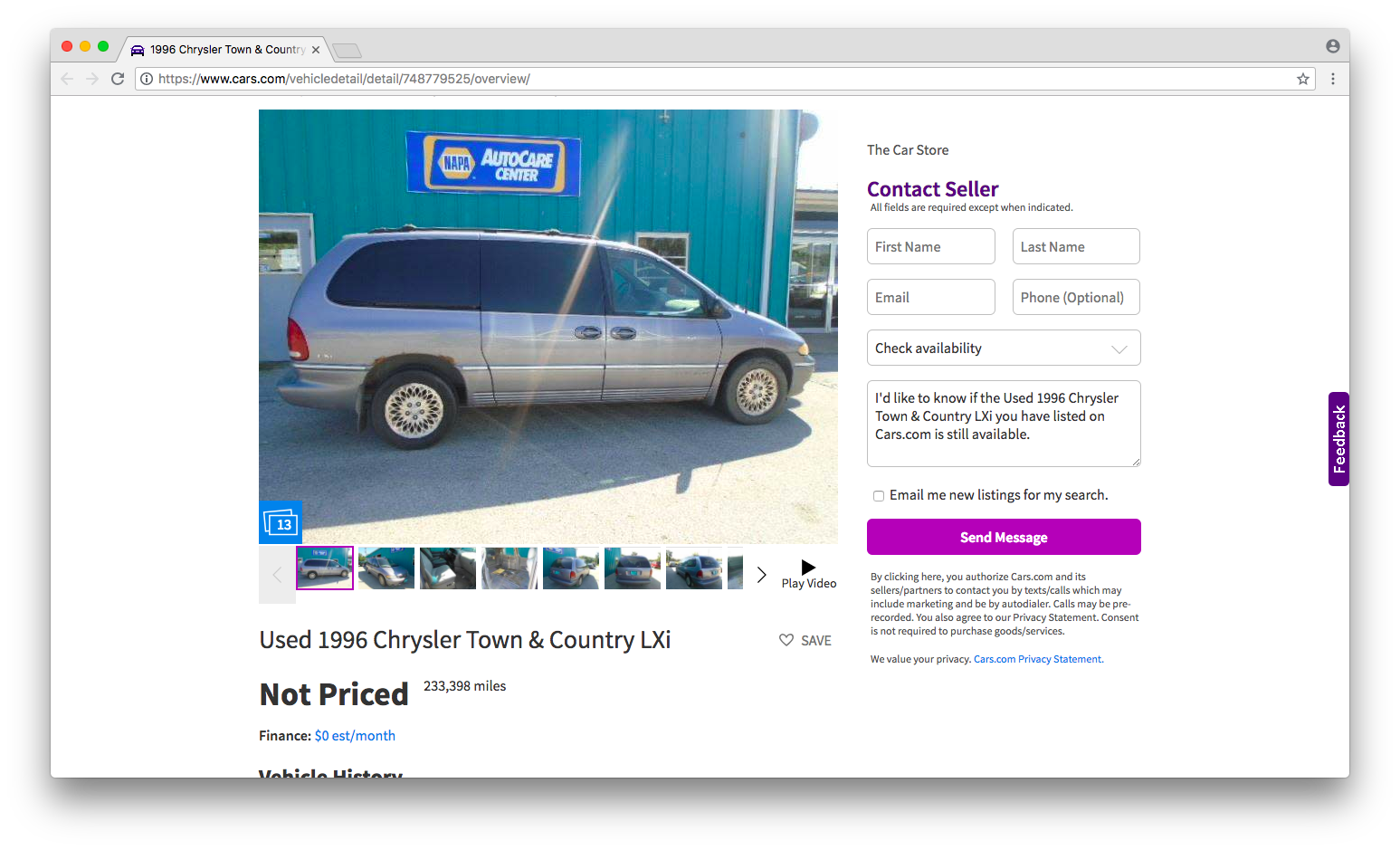 While the price is not listed on cars.com, further research on the dealer's website does, in fact, list the vehicle for $300. Outside of the whopping
233,398 miles it has on it, here's what else the dealer had to say within the first few lines.