The ambitious, bold and hungry start their week with The Business of Business!
Markets
10.23.18   2:17 PM Markets

Canadian cannabis producer Tilray added 21 distributors in the past month

This pot company is growing faster than any Canadian pharmacy. We map out where and when.

Canadian cannabis producer Tilray ($TLRY) made headlines in July when it became the first marijuana company to go public on the NASDAQ. Investors were warmly receptive, sending the stock from an opening share price of $17 to more than $200. Bloomberg Business reacted by tweeting "Pot company Tilray is now bigger than CBS, American Airlines, and Clorox."

Today, Tilray's stock price sits at a somewhat more modest (but still impressive) $112.14, giving it a market cap of over $10 billion. This makes it larger than American over-the-counter pharma company Perrigo.

Outside of stock prices, however, Tilray is growing where it matters the most: what the company calls "cannabis clinic partners", or physical locations where Canadians can buy cannabis products.

Cannabis isn't (yet) sold at pharmacies in Canada. Instead, it's sold at these locations, of which Tilray now has 169 in 84 Canadian cities.

The new locations are listed below: 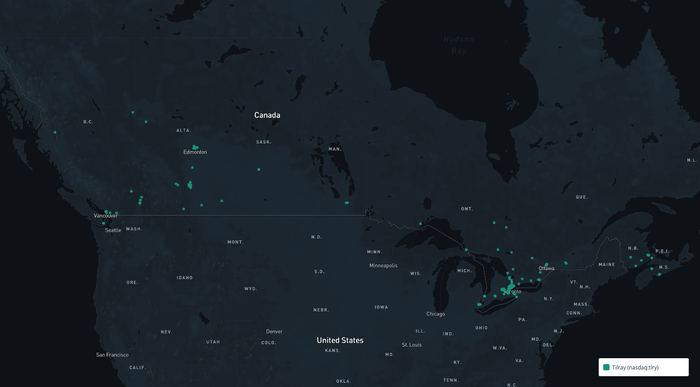 Tilray's 169 locations throughout Canada appear poised for further expansion as the company continues to grow rapidly.