Hundreds of millions of people are logging in for a fix every day. It's just a game, though, right?

I am convinced that were it not for smartphones and their addictive qualities, the NYC commute would not be half as bad as it currently is (even taking into account increased ridership and a struggling infrastructure).

I can deal with crowds when those who make up the crowds are paying attention to one another.

I’m cool with people who want to read a book or even play a game on their phone.

But when either one turns you into a selfish, mindless, Candy Crush Zombie, and it means that you walk at a different pace in a fast-moving commuting crowd, or it means that you’re looking down at your screen for that final combo instead of paying attention to other people on an escalator at a subway exit, we have a problem.

Few would argue there isn't an addiction problem with games like Candy Crush Saga. But is said addiction at a massive scale? And if so, is massive-scale addiction to a game a problem? Should we be as concerned about people who are so addicted to these games that they fail to behave as conscientious members of society?

Last week, I shared with you the top-10 things people log into with their Facebook accounts. Of those 10 things, three were variations of games developed by King, makers of such ubiquitous time-eaters as Candy Crush Saga, Farm Heroes Saga, and another 198 games you probably haven’t heard of, but are being played by hundreds of millions of hapless fans.

The above chart shows the top-10 apps used via Facebook login since December 1, 2017. It looks at daily rank (according to Facebook) for that time period, ordered by average daily rank. The data can be found here for subscribers.

Candy Crush may look like harmless fun, a way to unwind after a stressful day - and it just may be - but when we took a closer look at the numbers, it’s clear that something very big is happening here.

According to our data, here’s how many people are checking into those top-three apps on a daily basis:

These numbers are estimates that can top out at thresholds, of course, and they’re the latest snapshot of users, but it’s fair to estimate, based on the data, that about 20 million people are using Facebook to check in at least once a day into some iteration of Candy Crush or Farm Heroes Saga (which is based on similar mechanics).

King isn’t shy about touting usage numbers on their site, either. They claim 293 million monthly active users across 200 games.

King appears to be aware of what they’ve created, too.

“At King we design games with a broad appeal, which allow people to play for a moment, then move on with their day and pick up their game later,” it says on its website.

Sounds harmless enough. But then it continues:

“We make our games available for free, while players can purchase virtual items priced relative to the entertainment value they provide.”

Here the company reveals its revenue model: make games easy to get into, make them highly addictive, and then shut the user off just when the high is at its apex. Then ask for money.

In fact, all of King’s games are designed to time out - they cut players off and ask for virtual currency to continue. Otherwise, players are subjected to a waiting period in order to continue playing. 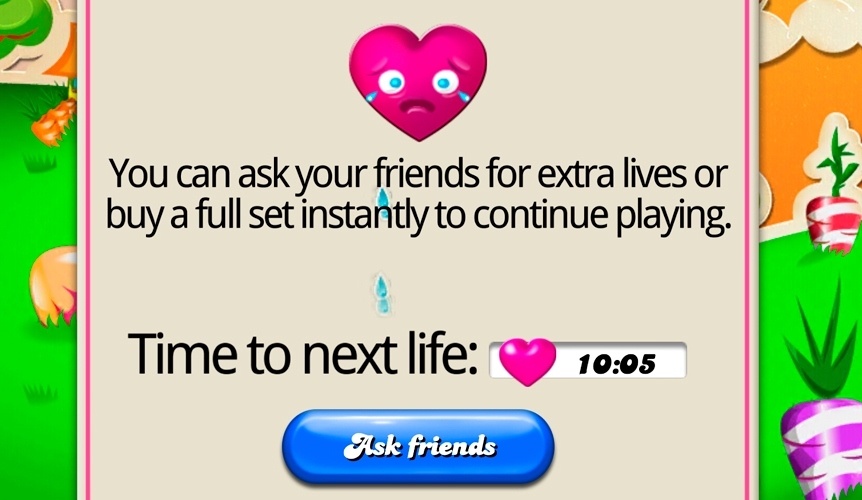 Of course, this means that either players pay up or they move on to another of King’s dozens of games all based on the same model, which is likely why we see so many of their virtually identical games topping the usage charts.

Some background: King is owned by Activision-Blizzard ($ATVI), which claims a market cap of almost $55 billion and has seen its stock cruise from $45 to $72 per share in the past year, making it the largest gaming company in the Americas and Europe. They make hundreds of games and run dozens of studios, and to be fair, they're not the only gaming corporation engaged in creating addictive product. Electronic Arts just last fall came under heavy criticism for using “loot box” elements in its Star Wars: Battlefront 2 game.

Putting it All Together

If we agree that people are using these games heavily - and the numbers certainly show that - it’s fair to look at what they’re doing when they’re playing. If we then agree that the game model is addictive - that it metes out rewards to those who return for stimuli - then we’re looking at mass addiction.

Addiction is defined by Wikipedia as “a brain disorder characterized by compulsive engagement in rewarding stimuli despite adverse consequences.”

As for the “adverse consequences” of playing what appears to be a harmless game that simply asks players to switch and match candy, one need look no further than one’s morning commute.

Next time you’re walking in a crowd or the next time you’re stopped at a red light, look over at your neighbor. See that person moving slower than others? See that person staring down at a bright screen filled with colorful candy? Notice how he or she isn’t paying attention in what could be an otherwise dangerous situation?

Or consider this: How much has that person spent on game items to continue playing? According to some reports, it's quite a bit. Is what they paid for an extra couple rounds of play truly "relative to the entertainment value they provide?"

My guess is no. Either way, King has a massively successful model on its hands: get users engaged, get them addicted, and then tap said users for money when it comes time for another hit of the good stuff.