The ambitious, bold and hungry start their week with The Business of Business!
Markets
3.4.19   5:03 PM Markets

JCPenney recently announced that it would close 18 stores in 2019. We took this news to see if alternate data could have predicted specific locations for these closures.

JCPenney ($JCP), the department store chain that was once an American retail empire, announced during its Q4 earnings call that it would close 18 stores in 2019 on top of an additional 15 that it said it would shut down a month ago by March.

Although JCPenney did not release a full list of shuttering store locations, we previously broke down where it might close locations among its current 853-store portfolio. We did this through three metrics:

The first was looking at where its competitors shut down and tying those locations to open JCPenney stores. The second was a proximity data analysis, or in other words, how close two sister stores were together. Last, but certainly not least, we looked at job listings to see which locations had a major decrease in openings in recent history, which is a red flag that something might be happening at those stores. 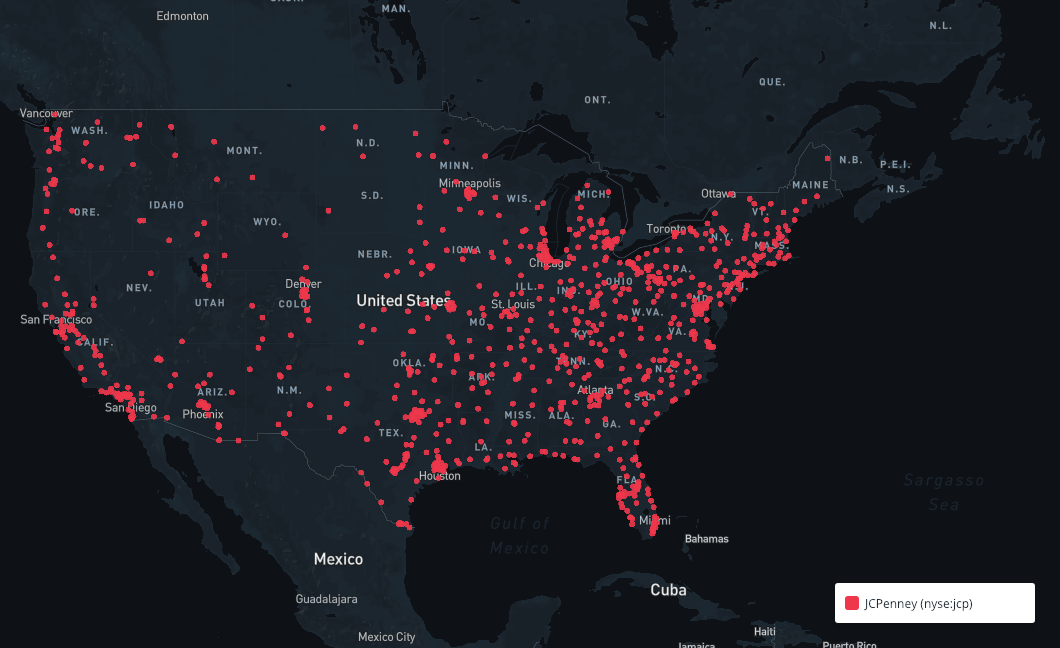 So far, one store has been confirmed to be closing, as it was reported by local Ohio newspaper The Chronicle-Telegram. That store is located at the Midway Mall in Elyria, Ohio.

We did not have Elyria anywhere in our top-10's across all three metrics, so let's look back and see where it fits in:

One metric we used to predict store closures was looking at that retail company's competitors shutting down nearby. The most obvious competitor to JCPenney is Macy's ($M), another department store chain that's also weathering the retail apocalypse (but isn't shuttering completely like Sears ($SHLD).

Our database shows three closed Macy's in Ohio, none of which were in Lorain County, the region where the Midway Mall lies.

However, we also looked at where we started tracking and updating Macy's locations, which was in 2017. A year prior to that, the Chronicle-Telegram reported that the Macy's at Midway Mall was shutting down.

While alternate data has its limits — not everything can be retroactively tracked, especially when it comes to retail store locations — it seems that there is a fair argument for looking at where a retail store's competitors close down when it decides to also shrink its portfolio.

The nearest "competing" JCPenney was about 7 miles away

Another technique we use to figure out the areas that are most at-risk for closures is a proximity analysis. The simple law of supply and demand is that when supply (stores) outweighs demand (customers) in a given area, the most logical step is to close stores until local supply and demand hit equilibrium.

In Ohio, there are 37 JCPenney stores currently open. 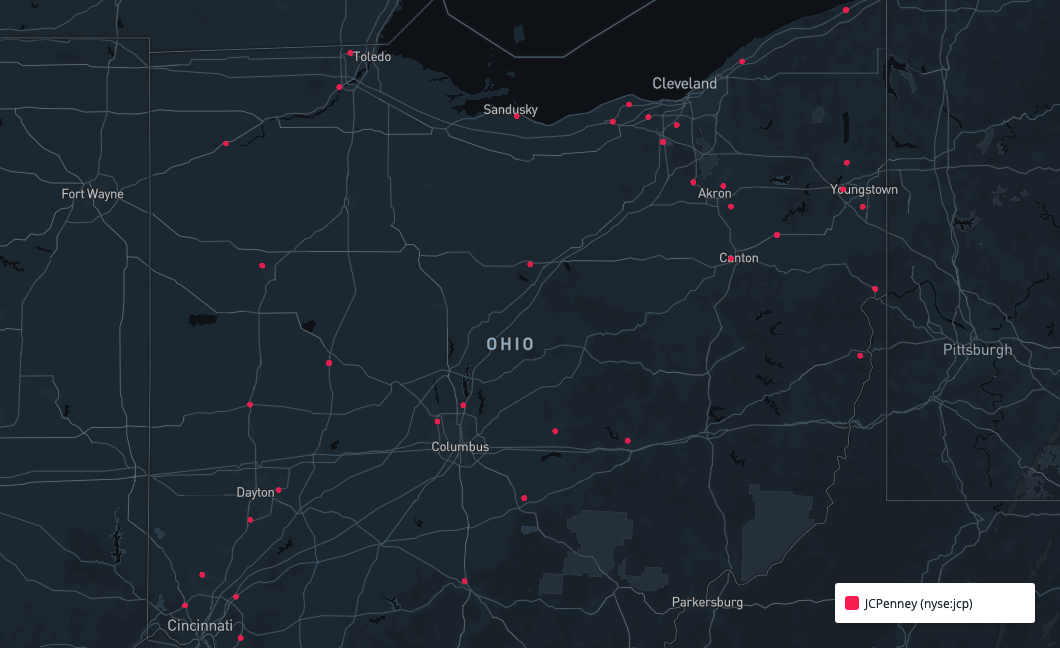 When it comes to the proximity matrix, the Midway Mall store ranked 7th out of all Ohio stores, as it had a sister store 7.14 miles away by straight line distance.

Although there were several stores that were less than 7 miles away from each other, the Midway Mall store had a few concerning signs. For one, it was among the group of stores far below the average in terms of proximity to sister stores.

Furthermore, the Midway Mall store is in a Cleveland suburb with two other stores within 10 miles in straight line distance: one was at Avon Crossing, and another was at the Great Northern Mall.

According to Google Maps, it's possible to drive between the Midway Mall location and either of its sister stores in less than 20 minutes with minimal traffic. 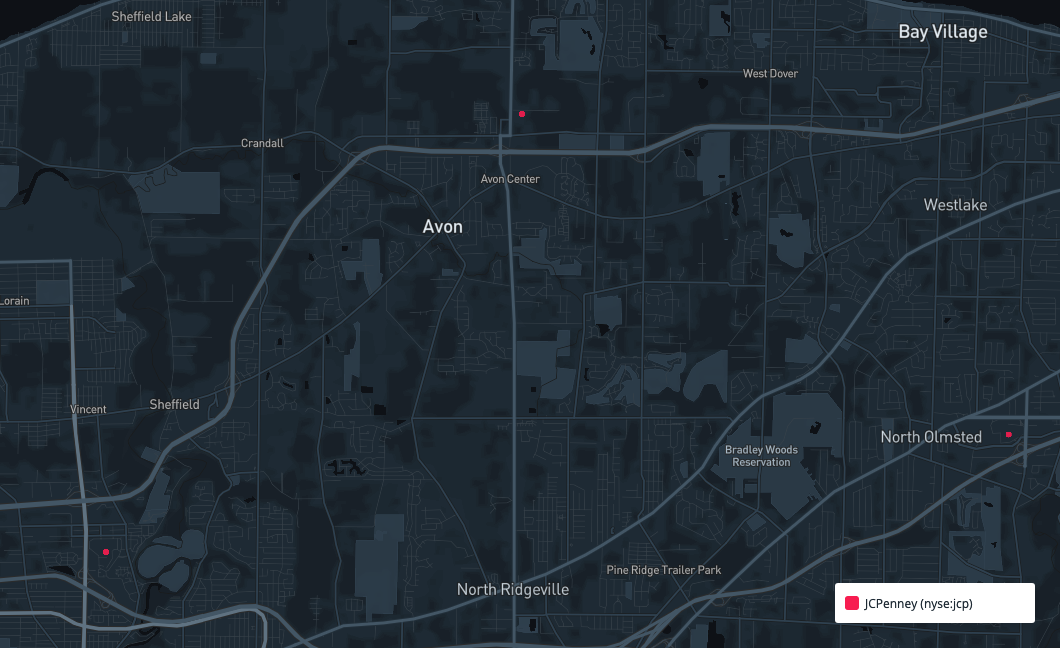 So while the Midway Mall store wasn't a top-10 in terms of overall proximity in the country, it still was in a crowded territory, even within its own state.

Job openings were actually up in days leading up to announcement

Elyria wasn't on the radar when we broke down the biggest swings in job openings. That's because JCPenney kept its job postings up for Elyria even days before the store was announced to be closing this year.

What we can draw from here is that job openings might not be the best metric to determine where a store could close. Indeed, looking at job openings has helped us infer about what companies are hiring for, but it may not be the ultimate insight metric.

And that is pretty understandable; a closing store still needs a crew to operate up until the lights go out for the last time, and many retail locations keep job postings up for much longer than a typical company would due to turnover and the nature of the position.

So can we say that we are the canary in the coal mine for this closing? In terms of our written analysis, unfortunately not. But, within the alternate data provided by the Thinknum platform, it could be inferred that the Midwall Mall store was a candidate to be closed, which means we all have to dive a little deeper